Ariana Adams subbed in for a struggling Kaia Oliver in the bottom of the fourth inning against Georgia Tech. Syracuse trailed 2-0 with one out when the Yellow Jackets’ head coach Aileen Morales called in Auburn Dupree to pinch run. She immediately stole second after a high throw by SU catcher Laila Alves, and as the ball rolled deeper into the outfield, Dupree ran to third.

After being walked by Adams, GT runner Ella Edgmon ran toward second as Adams delivered a pitch to Mallorie Black. As soon as Alves jumped up and whipped the ball to second baseman Kelly Breen to try to beat out Edgmon, Dupree ran to home plate and scored.

The Orange allowed three stolen bases in just two at bats, including a double steal, which let Georgia Tech score without making contact on the ball. With the runs allowed from stolen bases, SU ultimately fell 4-2. This has been a theme throughout the Orange’s season and has hurt them in several key moments.

The Orange’s struggles in preventing stolen bases showed early in the season, even in big wins. In its season opener against Mississippi Valley State, with Syracuse holding a 7-0 lead, Adams walked the first two batters in the bottom of the fifth. Both of the runners got in scoring position when they simultaneously stole second and third base. An infield single followed by a throwing error allowed the two runners to eventually score.

Although there’s been similar instances all season, this issue popped up in the team’s last two ACC series against Louisville and Duke. The Orange were behind 2-0 in the bottom of the fourth against the Cardinals on April 15, and aside from a two-run shot in the opening inning, Adams had been pitching well. Louisville’s Mia Forsythe was on first when the stolen bases started to take a toll on SU. 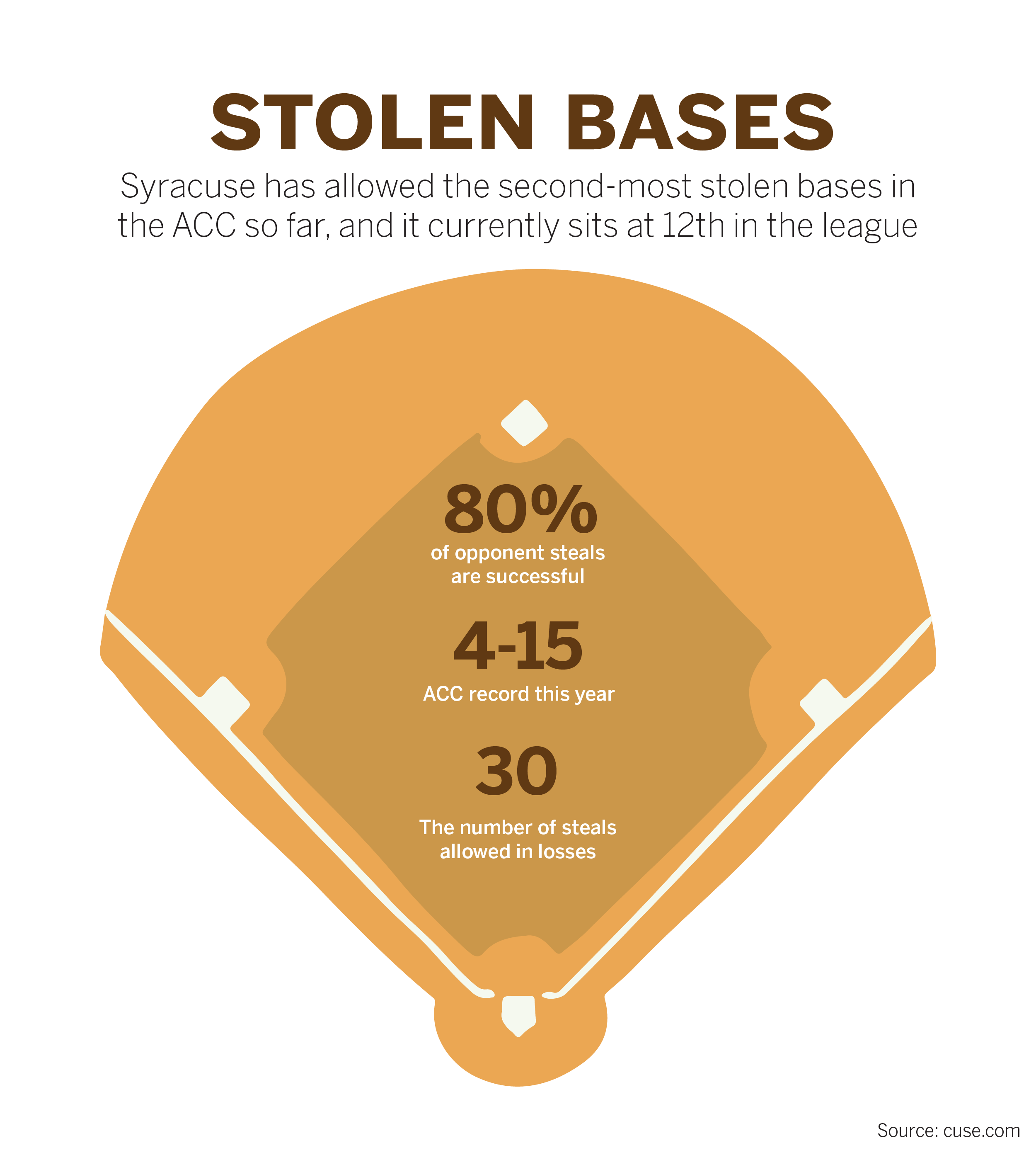 Forsythe got in scoring position after stealing second on a late Alves throw. She then jetted home after Yamila Evans couldn’t get a hold of a choppy ground ball at second base, scoring the Cardinals’ third run.

Then, Vanessa Miller stole second on the next at bat, and she was sent home following a pair of singles, as the Cardinals led 5-0. Jenna Servi also stole second after she drove Miller home on a single.

The Orange were down by eight runs by the end of the inning and lost on a mercy rule.

This issue was apparent in the first inning of Syracuse’s series opener against Duke in April. Adams allowed Jameson Kavel to steal second after walking her on eight pitches, and runners began filling the bases once Adams hit Duke’s Deja Davis with a pitch. Then, both Blue Devils runners got in scoring position by stealing second and third concurrently. After a wild pitch allowed Kavel to run home, Duke had scored without ever putting the ball in play.

Later in the inning, Kristina Foreman sent Davis home on a double up the middle. Even though the Orange allowed Gisele Tapia to steal second again just minutes later, Adams put out the next two batters to complete the first frame.

The problem popped up again the next inning, as Alves tried to throw out Kyla Morris as she tried to steal second but the ball was way out of reach. Morris got to third following the errant throw and ended up scoring on a Kamryn Jackson single to shallow center. There were no outs in the top of the second and Syracuse was already down by three on one Blue Devils hit.

Adams and Alves seem to be involved in most of these mishaps and lead the team in stolen bases allowed, likely because the two pitch and catch for the Orange most frequently. Additionally, Alves gives up the fourth most stolen bases of anyone in the conference.