With under a minute left against Northwestern, Jill Girardi passed to Lauren Gilbert just inside the left side of the 8-meter. Dodging from the left to center of the cage, Gilbert slipped a low-rolling shot past Kimber Hower and leveled the game at 15 after SU once led 15-12 with 4:23 left. SU had the final scoring opportunity, but Emily Hawryschuk couldn’t convert and the game went into overtime, where Northwestern won on a Gilbert free-position shot.

The final shot, and the loss as a whole, highlighted an area where Syracuse has struggled early on this season: the fourth quarter. Though the Orange have jumped out to a 5-1 start on the season, their fourth-quarter play continues to allow opponents to turn games that were out of reach into close battles.

In three matchups against Northwestern, Notre Dame and Stony Brook, the Orange have been outscored 14-4 in the fourth quarter. SU has developed at least a three-goal lead in those games and entered the final frame against Notre Dame with a 14-9 lead.

With 4:23 left against Northwestern, Hawryschuk scored her sixth and final goal of the afternoon, seemingly securing a comeback victory after the Orange trailed 8-5 at halftime. Hawryschuk’s goal created a 15-12 lead for SU, which had outscored the Wildcats 10-4 in the half at the point.

Northwestern had a near 0% chance to win at that point in the game, per Lacrosse Reference, but in a matter of three minutes, the Wildcats were back in a position to salvage the game.

It started with the draw, an area where Northwestern absolutely torched the Orange. Wildcats’ draw specialist Girardi won a career-high 13 draw controls, one fewer than SU’s total of 14. In the fourth quarter, the Wildcats won six of eight draws. After SU developed its late three-goal lead, Northwestern secured the next two draw controls, allowing it to cut the deficit to one with two minutes left.

“We just have to string together quarters, and a lot of it starts with draw control,” head coach Kayla Treanor said postgame.

In the fourth quarter alone, Notre Dame scored four of its seven goals from the free-position. To cut the lead to three, Kasey Choma had a narrow shooting window from the right side of the 8-meter on a free-position attempt and found the top right corner of the net just past Hower.

To force overtime, Notre Dame’s Mary Kelly Doherty scored a free-position goal, dodging from the left side of the 8-meter after Hallie Simkins conceded the foul that afforded the scoring opportunity. Meaghan Tyrrell scored following the opening overtime draw to seal the win, but Treanor said the late struggles have been a result of “mental” mistakes from SU.

“It’s something we’re working through, trying to make some changes so that we don’t have that continuing to happen,” Treanor said Thursday of Syracuse’s fourth-quarter play. “We have to work on finishing out those games and having just as strong a fourth quarter as we did the third.”

Notre Dame had a near 0% chance to win the game at the start of the fourth quarter, per Lacrosse Reference. But after the free-position goals, the blown lead and the forced overtime, that probability climbed to over 40%.

Against Stony Brook, Syracuse entered the fourth quarter with a three-goal lead. Though SU didn’t cough up the lead in regulation, the Seawolves managed to cut the deficit to one goal.

The Orange could’ve sealed it with an Emma Tyrrell goal that would’ve extended the lead to 13-11 with just over two minutes left, but after officials ruled she had an illegal stick, the Seawolves had one last opportunity to tie the game. 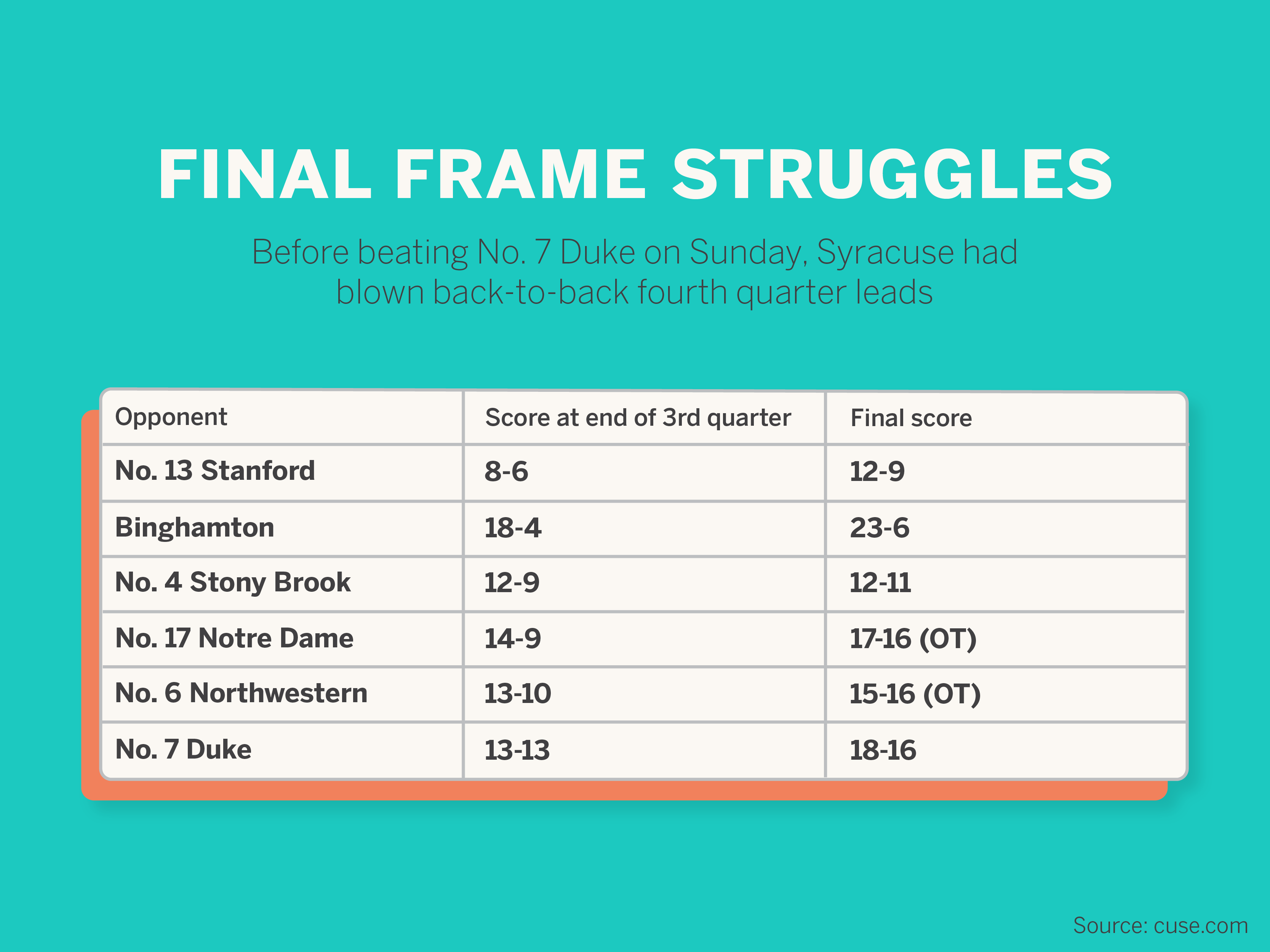 As Erin MacQuarrie dodged through SU’s defense, Natalie Smith forced a turnover that helped the Orange escape with a 12-11 victory. Similarly, at one point in the fourth quarter, Syracuse had a 99% chance to win, per Lacrosse Reference, but after Stony Brook cut the lead to one and the Orange didn’t score in the period, it dropped to just under 60%.

On Sunday against then-No. 7 Duke, the Orange played much better in the fourth quarter in order to complete the comeback after trailing 9-2 at the end of the first quarter. Syracuse outscored the Blue Devils 5-3 in the fourth and limited them to just two free-position goals on the day.

“For us, kind of just playing a full 60-minute game, I don’t think we’ve been able to come up with that so far,” Meaghan Tyrrell said before the Duke game. “Being able on both ends of the field to kind of put a whole game together is definitely a goal of ours.”