Pittsburgh’s Kierin Ratliff-Kailbourne tried to dodge past her defender with only five seconds remaining in the first quarter. She spun and bolted just inside the top of the 8-meter, rifling a rolling ball past Kimber Hower as time expired, extending the Panthers’ lead to 4-2 while the Orange scored their second-fewest first-quarter goals of the season.

The Orange finished the game on a 16-2 run throughout the final 45 minutes to secure an 18-6 victory. But in the back half of the season, slow starts have been common for the Orange, notably against Pittsburgh, Cornell and Louisville. In all three games, SU didn’t lead entering the second quarter and managed at most three goals in the first quarter. With the regular season complete, SU will face stronger competition in the postseason where strong starts could be a crucial factor.

“It’s just been a focus of ours, just trying to work on our start and execute the game plan right away (and) don’t wait to get into it,” head coach Kayla Treanor said after Syracuse’s win over Albany. “There’s definitely room for improvement, but it was probably a better start than Cornell and Louisville.”

After trailing 1-0 with 9:30 left in the first quarter against Cornell, Syracuse responded with a 3-0 run with Emily Hawryschuk recording three of her eventual career-high 11 points. But Cornell responded with a 5-0 run in eight minutes to take a 6-3 lead halfway into the second quarter.

Two goals came in the final 90 seconds of the first quarter. The first came from Josie Vogel, who scored unassisted dodging down the right side of the 8-meter. And in the last five seconds, Genevieve DeWinter tied the game at 3-3 entering the second quarter.

To finish off the scoring run, Amanda Cramer dodged past Katie Goodale from behind the left side of the goal and scored. After that goal, the Big Red’s in-game win probability nearly reached 80%, per Lacrosse Reference, but ultimately, SU’s 9-0 and 8-0 runs increased the score to 20-9 by the end of the game.

“In the beginning, what we were doing, it was just average,” Hawryschuk said after the Cornell game. “I thought the score reflected that, having it be as tight as it was.” 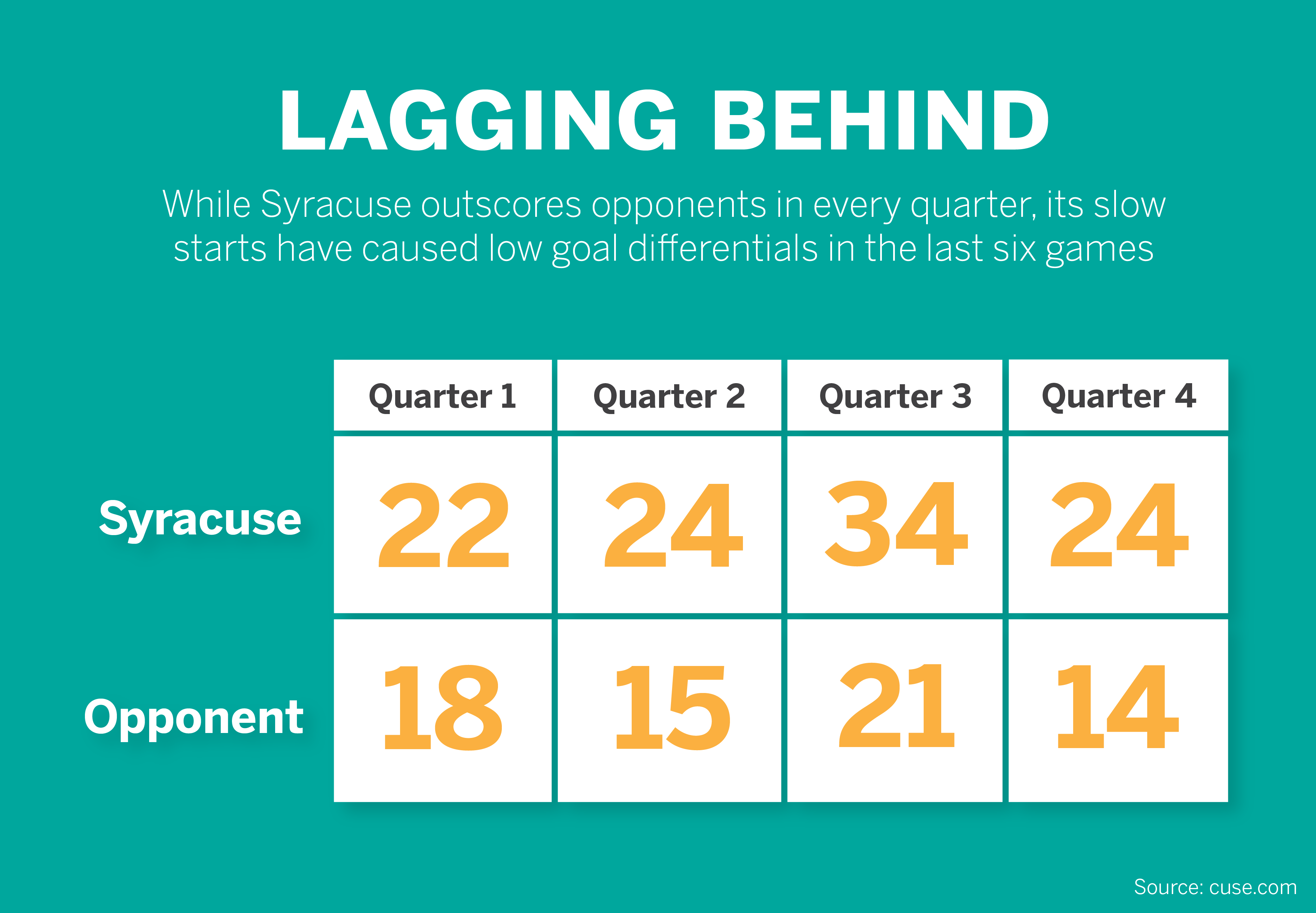 Part of the Orange’s slow starts can be attributed to their own mistakes. Against the Big Red, SU had five first-quarter turnovers. On Syracuse’s opening possession of the game, Hawryschuk tried to play a simple pass to Meaghan Tyrrell from the left side of the 8-meter to behind the goal, but it simply didn’t connect, giving Cornell an extra possession. On another play, Olivia Adamson thought she had a teammate cutting inside the 8-meter, but the pass didn’t connect with any SU player and the Big Red secured an easy ground ball.

In the first 17 minutes against Pitt, the Panthers committed 13 fouls, five of which led to free-position opportunities for the Orange. SU struggled to capitalize at the free position, missing all five attempts.

Early in the second quarter, Sam Swart dodged straight towards goal. But as she approached the crease, multiple Panther defenders collapsed on her, forcing Swart to fall down and take a powerless shot that bounced into Paulina DiFatta’s stick. At the beginning of the game, Pittsburgh had nearly a 0% chance to win, per Lacrosse Reference, but its chances jumped to just over 50% after generating the 4-2 lead.

“It just reflected how we were playing overall,” Treanor said after the game about missing at the free position. “We were really timid, and we weren’t in a flow.”

The Louisville game was similar to the Cornell one as the Orange committed four first-quarter turnovers. Syracuse only managed six shots in the opening 15 minutes and just two goals, though its defense limited the Cardinals to only two goals as well. The teams went back and forth throughout the first half with SU leading 8-7 at halftime. Still, the Cardinals had more than a 50% chance to win in the second quarter after starting with near 0% odds, per Lacrosse Reference.

As the ACC and NCAA Tournaments approach, Syracuse cannot play down with similar slow starts against stronger opponents like in these three games, which featured teams that rank 51st or better in ELO-rating, per Lacrosse Reference. SU showed it can have strong starts, tying No. 1 North Carolina and No. 2 Boston College at 4-4 at the end of the first quarter in both games.

Against Albany, the Orange started the game on a 7-0 run and finished the first half outscoring the Great Danes 12-2. It was one of SU’s best starts this season, coming against a side that ranks No. 37 in ELO rating, per Lacrosse Reference.

To win the ACC Championship, Syracuse will likely face Boston College and North Carolina once more. The Orange fell by two goals in both games, but they didn’t start poorly, which allowed them to keep the game close to the end.

“Something we really emphasized today coming into the game (was) starting fast, getting up on them and kind of just keeping a lead throughout the whole game instead of digging ourselves a hole and trying to climb out of it,” Meaghan said postgame against Albany.

The post Slow starts could plague Syracuse in postseason tournaments appeared first on The Daily Orange.