Greek immigrant Kleopatra Pess always had the philosophy that “if you weren’t active, you were going to get in trouble,” her son George Pess said.

That’s why she was such a vocal supporter of her granddaughter, Olivia Pess, playing softball. Pess’ yiayia — which means grandmother in Greek — attended her games from tee ball to travel ball.

For Pess’ entire life until Kleopatra passed away last summer, her yiayia lived on the first floor of the family’s house. She immersed Pess and her sister Samantha in the culture that she grew up in back in Piraeus, Greece.

Now an outfielder for Syracuse, Pess was recently selected to the Greek national team’s roster for the World Baseball Softball Confederation European Women’s Championship this summer, a 22-team qualifying tournament that sends three teams to the WBSC Women’s Softball World Cup. Pess said her ties to her grandmother were the main reason why she wanted to play for Greece.

Several of Greece’s outfielders are college graduates who plan to retire from international softball, Foti said. He sees Pess as a fundamental part of the program in the coming years.

Pess’ family was not even aware Greece had a softball team until she graduated high school. But after seeing the Greek national team play at a tournament Pess was attending, George, Pess’ father, inquired about it. Pess received an invitation to try out for the team at a camp in Southern California the following summer.

Pess said that she had always wanted to connect her Greek heritage with softball, but couldn’t see how until the opportunity to try out for the national team presented itself.

“It’s a sign of respect and love for her grandmother — her yiayia,” George said.

After her strong performance at the camp, the Greek national team invited her back for another five-day camp in Tarpon Springs, Florida, the city with the largest Greek population in the U.S. In Tarpon Springs, the team met the mayor as well as some members of its Greek community, and participated in philanthropy work. 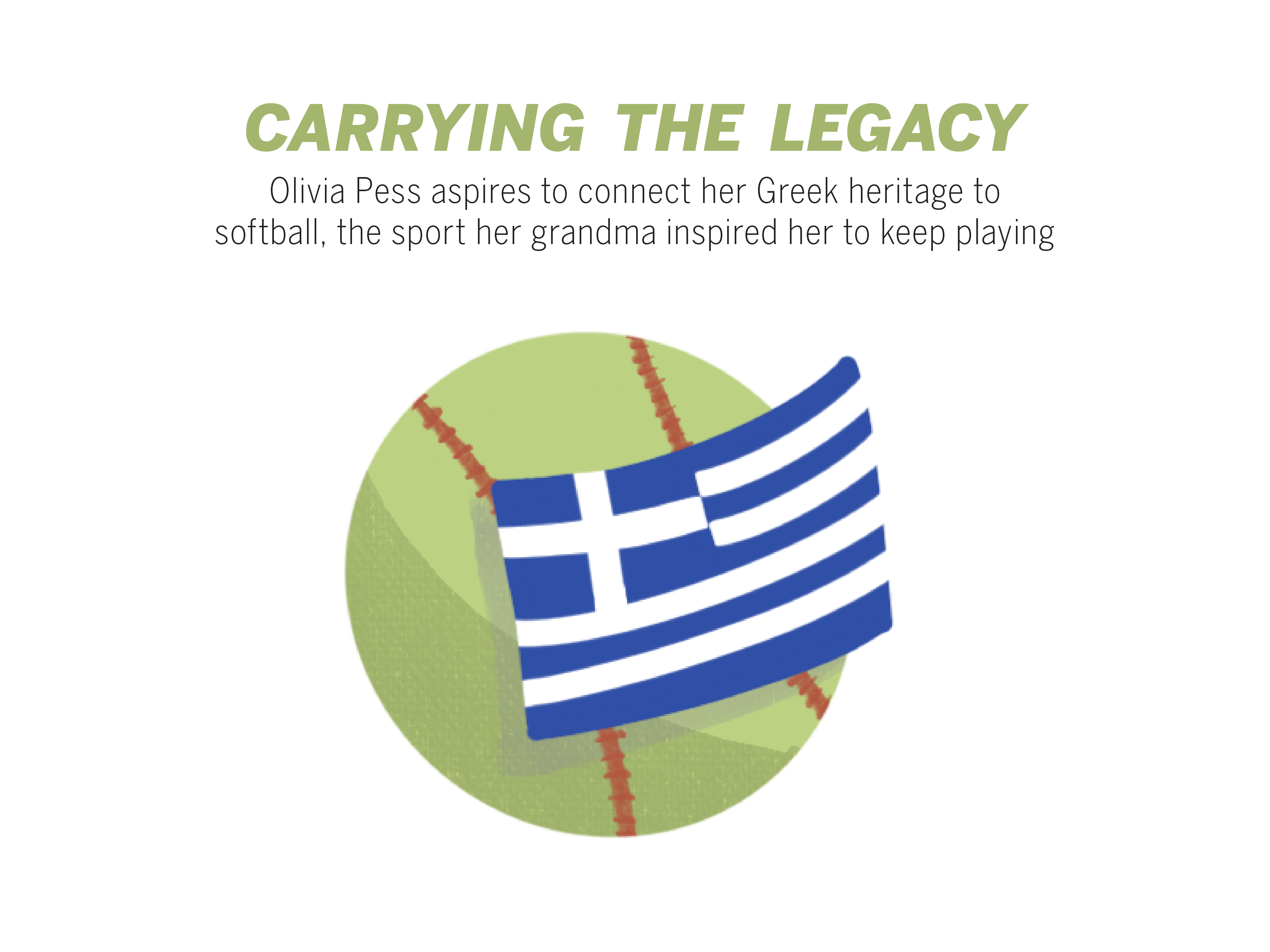 “You get to know the girls at a cultural level,” Pess said. “Some of the girls speak Greek. I can fully understand it, so it’s really fun to relate to them on a level that’s more than just softball.”

Pess’ Greek-American roots began when Kleopatra immigrated from Greece in 1964. She immersed Pess in Greek culture and the Orthodox Greek religion from the moment she was born, speaking Greek to Pess and Samantha for their entire childhoods. Kleopatra acted as a third parent to the two sisters, George said.

Kleopatra also taught them old Greek songs and showed them old Greek movies and musicals. For Greek Easter, she showed them why they dye the eggs red, why they eat lamb and how to make traditional foods like spinach pie. Because of Kleopatra’s instillment of their culture, Olivia said her Greek heritage means “everything” to her.

However, in order to play for the national team, Olivia still needs to obtain Greek citizenship, which is notoriously hard to get, Foti said. Without her citizenship, she can travel and practice with the team but is not allowed to play.

George must first obtain direct root citizenship because Kleopatra was born in Greece. Then, Olivia and Samantha can be naturalized, which makes the citizenship application easier.

George had to obtain birth and death records as well as marriage licenses for his mother and father. Because Kleopatra was a child during World War II, some of her records were difficult to find, Pess said. George hired a Greek lawyer to obtain Kleopatra’s documents and found his father’s documents himself. Pess also had to write a letter explaining why she deserves citizenship.

The length of the process can vary, Foti said. Some players receive it in as short as nine or 10 months while it can take four or five years for others.

Pess intends to drive to the Greek embassy in Boston after the conclusion of Syracuse’s season for her citizenship interview. She hopes to receive citizenship by the start of the tournament.

Before the tournament, the team will hold two camps, one in the United States and another at the International Olympic Committee Training Academy in Olympia, Greece. The winner of the competition automatically qualifies for the next softball World Cup and the top six finishers qualify for further tournaments where they can earn qualification.

The Pess family always viewed amateur athletics as important, but Pess representing Greece is the “pinnacle” of that mindset, George said. He emphasized that her participation is not just about her heritage, but for people, like her yiayia, that were involved in that heritage.

“It’s a great opportunity beyond just the softball field,” Pess said. “It gives my children an opportunity to get citizenship and live on a legacy for my grandmother that I really hope to have.”