Dyaisha Fair approached Jack Palmeri in the middle of Edison Tech High School’s hallway and asked if he was the girl’s basketball head coach. Once he said yes, she told him she was going to be his best player, or at least the best one he’d ever seen. Palmeri laughed — he’d heard that countless times before. But he took Fair into the gym during her lunch period and handed her a basketball.

“Do something,” Palmeri said.

Fair can’t remember if she just shot around, played against someone else or with Palmeri himself, but she knew she wanted to prove that she wasn’t lying. But in the back of her mind, Fair wasn’t sure if she’d be able to make the team. “Maybe I think highly of myself, and I may not be what I think I am,” Fair thought.

She didn’t need to doubt for long because when she stepped on the court to try out for the high school team her freshman year, she immediately began “blowing through everything,” Fair said. Each cone drill, two-step layup attempt, dribbling and shooting exercise was just as natural as it could be for her, Fair said.

After one of the most decorated seasons at the Buffalo, Fair announced her intention to transfer to Syracuse on Tuesday, with the university making it official the following afternoon. She became the fastest player in Buffalo history to reach 1,000 career points and finished last season fourth in the country in points per game. Now, she’s following her coach, Felisha Legette-Jack, along with three other Buffalo players, to SU.

“The big thing (about transferring) was my former coach, of course,” Fair said. “Just keeping that bond where it is and just trying to continue what we’re doing on the biggest stage.”

Fair first met Legette-Jack at the coach’s Elite Camp during the summer after her junior year. After watching Fair compete throughout the weekend, the then-Buffalo head coach stopped her, called her over and asked if the rising senior knew who she was.

“She went on and said, ‘Well, I need you to call your family and let them know that you were just offered a full scholarship here at the University of Buffalo,’” Fair recalled.

It surprised Fair, first because she didn’t even know Legette-Jack could offer her a scholarship already, and second because of how easy it was for Legette-Jack to offer Fair.

Fair didn’t start playing organized basketball until about seventh or eighth grade. Prior to that, she only played in a recreational league at the Campbell Street Recreation Center in Rochester. She only played against boys that were her age and up to five years older, which Fair said made her faster and stronger, propelling her to become the talented 5-foot-5 guard that she is now. 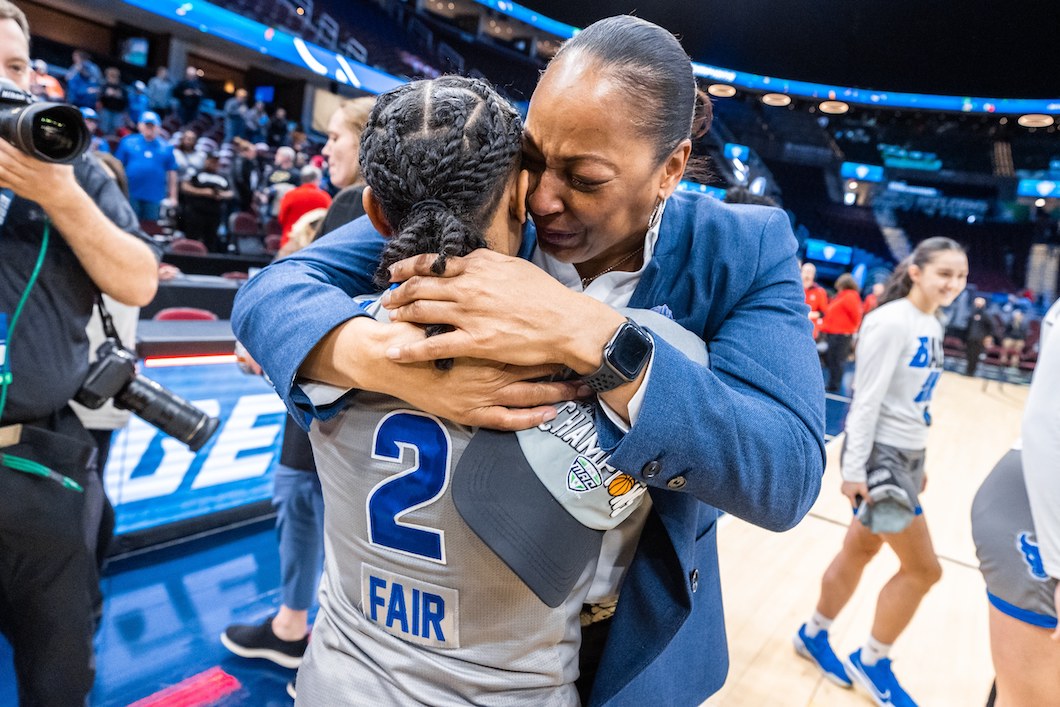 Fair will be reunited with Felisha Legette-Jack next season at Syracuse. Courtesy of Paul Hokanson | UB Athletics

Her speed makes up for her size, and the fact that all throughout AAU, recreational basketball, and high school games she worked to ensure that her defender never knew what move she’d make. Recreational games helped her develop her quick shot and to sell moves, Fair said, leading to her becoming one of the nation’s top scorers at Buffalo.

“That’s where it all started for me, the organized piece and really trying to recognize the abilities that I had,” Fair said.

Once practices at Edison ended, Fair went straight to the gym — either Campbell Street Recreation Center or a local YMCA — and trained, worked out or practiced in-game scenarios until 8 or 9 p.m. with the same boys she began playing with.

Now with Syracuse, she gets to watch her coach “live her dream” at the same time Fair gets to live her dream playing in one of the nation’s toughest conferences. Fair is looking to develop more, keep the culture Legette-Jack created with the Bulls and to “just win” with the Orange.

“(Legette-Jack) presented a different aura to me, and it was something that I really gravitated toward,” Fair said. “I latched on to and really embraced who she is and what she stands for.”

The post A look into Dyaisha Fair’s decision to transfer to Syracuse appeared first on The Daily Orange.