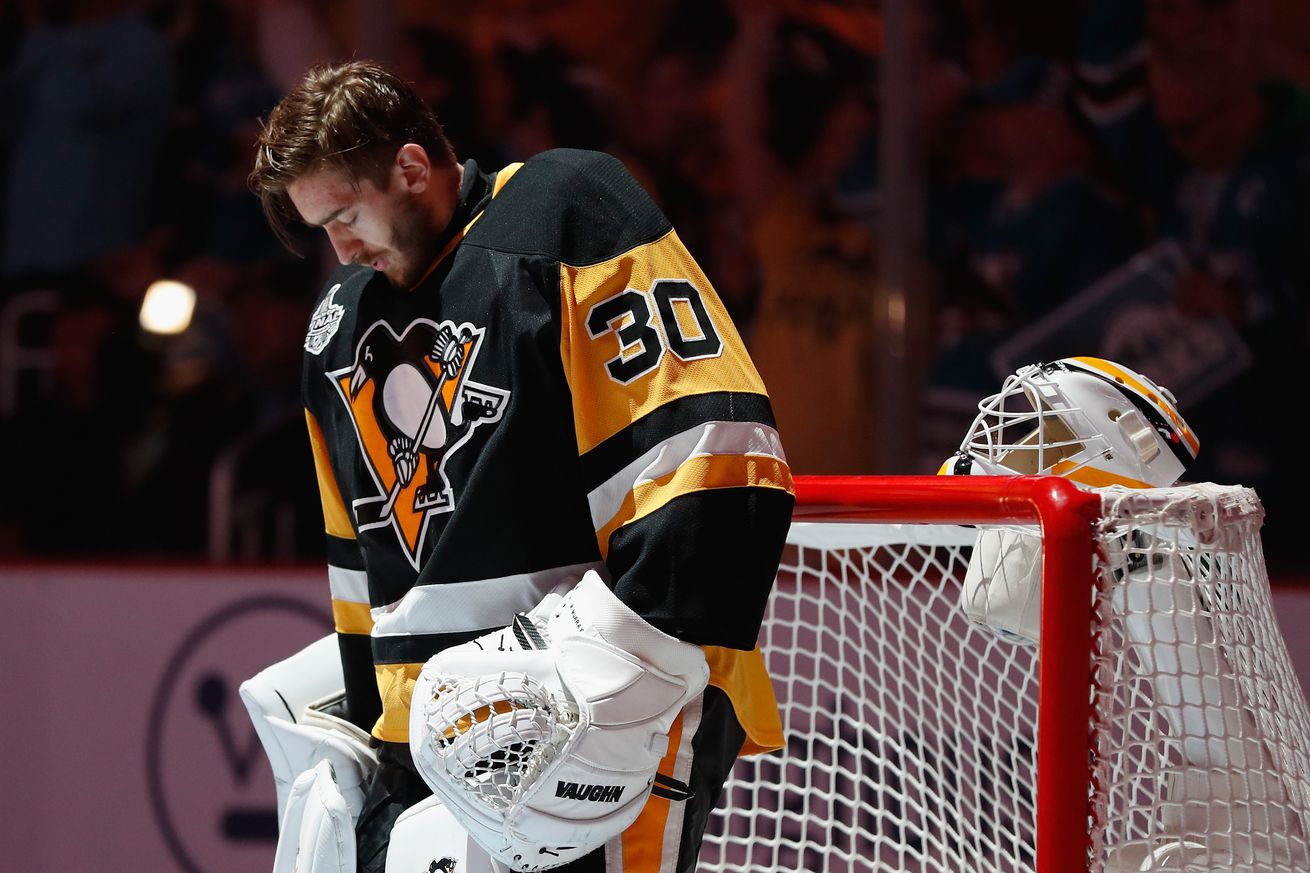 Which goaltenders on the market are worth exploring?

After acquiring Eric Staal last week to fill their biggest need next season at second line center, the Buffalo Sabres will likely turn their focus to improving perhaps their next biggest need – goaltending.

It’s no secret the Sabres’ goalies as a whole were not up to par last season, and they will explore all options available to improve in that area. Linus Ullmark is a restricted free agent this offseason, and will need not only a new contract, but new a running mate as well. Carter Hutton is still under contract with the club for next season, but, repaired vision or not, his lackluster play leaves his status in the organization in doubt.

So who and where can general manager Kevyn Adams turn to in order to fill this void? Let’s decipher some of the top options, with the best ideas earning a “thumbs up” verdict and the less appealing ones receiving a “thumbs down”.

Change is needed in Toronto, as the team has under-performed with early postseason exits over the last three seasons. This has spurred rumors that Andersen could be on the way out, who is currently listed at number 19 on TSN’s Trade Bait list.

He was acquired by Toronto from Anaheim with hopes of becoming a stalwart number-one netminder, and for the most part he has been. Over the last three seasons, Andersen has posted a solid 91.46% save percentage and saved 8.52 goals above expected. This is all despite him coming off a major down year, where his numbers were below average.

As far as being an option for the Sabres, an acquisition of Andersen would cost both assets via trade and significant cap space to house his five million dollar contract for the upcoming season. Is it feasible? Sure, if Toronto general manager Kyle Dubas views him as more of a cap dump than an asset. However, with Ullmark’s impending RFA status warranting a new contract, I’m not sure the Sabres front office wants to tie up significant dollars in cap space to the goaltending position next season in a flat-cap year.

Perhaps an overlooked piece of Chicago’s most recent Stanley Cup runs, Crawford has been a sure-fire quality goaltender when healthy. While his age will likely reduce his contract value, the 35 year-old netminder will enter unrestricted free agency coming off of a six million dollar per season contract.

What’s his value now? Well, the cap situation throughout the league and an influx of goalies available on the market might make for an interesting situation. It’s possible the Blackhawks look to retain his services, otherwise he will likely have to wait out the market and take a starting-quality, short-term contract somewhere that missed out on a younger goaltender.

As for the Sabres, they should inquire with Crawford’s camp. While he may want to go to more of an immediate contender, he may not get that option. As shown with the Eric Staal trade, GM Kevyn Adams is not afraid to add a veteran on a short-term value deal.

Sort of hiding in San Jose behind a struggling starter in Martin Jones, Dell actually pieced together a decent 2019-2020 season. When it comes to his career, he has posted generally average to below average numbers in a strict backup role.

Is there potential for a quality tandem when paired with Ullmark? Sure, but there’s not enough overwhelming evidence to really favor the idea. Odds are, Dell will sign with a team somewhere to backup an incumbent starter and be a fringe NHL player at best.

Here’s an interesting name to suddenly be on the market. It’s rumored that Vegas will look to re-sign pending UFA Robin Lehner and move on from the face of their franchise in Fleury. If anything, his agent’s twitter post has helped seal that fate.

Sure, Fleury is a big name, but does the production match his status? If you’re looking at strictly last season, that answer is no. To be frank, it was his goaltending play that cost Gerard Gallant his job. It was the one spot on the team that took a clear downturn from years previous.

It would be near impossible, however, for the Sabres to fit his seven million dollar per year cap hit on their books. The flat cap and number of players due significant raises in the next two seasons just make this too unrealistic to ponder, even if you think he can return to previous form.

Here’s an interesting free agent in the sense that he is coming off of multiple seasons as the “1b” goaltender in a tandem. In fact, Greiss has done this with not only Semyon Varlamov, but also is two seasons removed from winning the William M. Jennings Trophy for fewest goals allowed by a tandem in a season with Robin Lehner.

As for his stats, the German netminder has consistently been around a 91% save percentage for a few years now. His goals saved above expected average out to slightly below -3.33 per season over the last three, dictating that some of his success has been a product of his team’s quality defense rather than non-extenuating play.

Is it a quality fit for the Sabres? The term and average annual value of the contract should be affordable. If the team wants to improve upon last year’s results and not try to slide by with mediocre goaltending, however, signing Greiss as the “1b” and forcing Ullmark to be the “1a” would require a significant positive leap in Ullmark’s play.

Perhaps the biggest name about to hit the free agent market, Holtby has had much success in terms of wins with the Capitals. With a Stanley Cup ring in his arsenal, he is likely to draw a lot of attention from playoff contenders looking to upgrade in net.

The caveat here is that Holtby is likely not an upgrade over any current NHL team’s starter. In fact, Holtby’s 89.71% save percentage last season is worst among all goaltenders on this list.

There’s a reason the Caps are ready to hand the reins over to youngster Ilya Samsonov and move on from their incumbent starter. Let’s not forget, even when they eventually went on to win the Cup, Philipp Grubauer – not Holtby – was named the starter heading into the 2017-2018 playoffs.

Needless to say, when weighing out cost versus effectiveness, the Sabres should stay from away from this idea.

Still in the midst of carrying his team in a Stanley Cup chase, Khudobin’s play this season has elevated him from an “under the radar” target to a premium short-term option. Questions among the Stars’ brass have surely been raised on whether to stick with Ben Bishop or attempt to re-sign their playoff hero.

Rightfully so, I should add, as his save percentage in 2019-2020 is tops on this list. It’s not a fluke either, as this percentage is only slightly better than his 92.47% average over the past three seasons with both the Stars and Boston Bruins.

Khudobin would be a quality upgrade for the Sabres in net, as I outlined in my Building the Sabres piece last month. This unprecedented playoff run has likely vaulted his value, however, so the cost-effectiveness of a deal would be the major question. If he can be had for four million dollars or less per season on one or two year deal, it should prove worth it.

With a general manager change in Arizona, Kuemper’s name has somewhat surprisingly surfaced in trade rumors. Sportsnet’s Elliotte Friedman has mentioned the idea multiple times now on his 31 Thoughts podcast.

Arizona has two top-five goaltenders on their roster in Kuemper and Antti Raanta in terms of goals saved above expected over the past three seasons. Since Raanta has only one year left on his current deal and played only limited minutes last season due to injury, Kuemper likely has more value and therefore will draw Arizona more assets on the trade market.

If Adams wishes to lock down a top-of-the-league quality goaltender on a decent contract, Kuemper is the way to go. The cost will likely debt the Sabres of some quality futures, but, depending on the direction of the rest of the offseason, this may be the ideal option to explore for getting the team on the right track quickly.

It’s amazing how a couple games can change a player’s career. Vancouver was making an impressive playoff run with Markstrom and seemed certain to re-sign him when they hit some troubles when facing Vegas. Markstrom ended up getting injured, and young backup Thatcher Demko stole a couple games in his place to suddenly make him expendable.

If Markstrom indeed hits free agency, he may be the best signing of the bunch – considering age, contract, and effectiveness. The 30 year-old just posted a career-high in save percentage to improve on what has been a slightly above-average career numbers-wise.

Buffalo should really dig into a Markstrom deal, as he could allow for a slow-cook for top prospect Ukko-Pekka Luukkonen in his development into the NHL. An average annual value of 4.5 million dollars would likely be my limit in negotiations to make it worth it.

The Stanley Cup winner was significantly outplayed by his net-mate Tristan Jarry last season, prompting his name to be circulating in all kinds of trade rumors heading into the offseason. As is the case with other big names on this list, there is a giant “buyer beware” sign that comes with with Murray.

Truth is, Murray would not be a significant upgrade in any sense for the Sabres. Even if last season was an outlier, his three season average puts him slightly ahead of Ullmark in terms of goals saved above expected per 60.

A pending restricted free agent, trading for and paying Murray would be more of a luxury insurance option for a team than an actual effective rendering, and Buffalo cannot afford that luxury.

Talbot had a solid bounce-back season in Calgary after coming over from Edmonton, where he posted sub-par numbers. Even so, his 91.28% save percentage and -0.29 goals saved above expected scream fringe starter at best, which would mean a tandem partner for Ullmark.

I’d be suspicious of Talbot’s prior seasons in Edmonton, and, with higher quality options on the board, I’d probably look elsewhere to solve Buffalo’s goaltending woes. Improvement is what they’re in search of, and I’m not convinced he is the answer there. If all else fails, he’d be an okay fallback option.