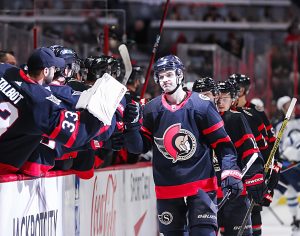 The Ottawa Senators young centreman, Joshua Norris, will be shut down for the remainder of the 2022-23 season. This is a frustrating conclusion to his season, but all signs point to this being the right decision. He had just returned from the original shoulder injury occurring on October 24th. After appearing in the club’s first five games of the year, he managed to play in the last three. Now it looks like the rehab route was not viable, and they have opted for surgery.

#Sens GM Pierre Dorion announced this morning that forward Josh Norris will undergo shoulder surgery on a soon to be determined date and that his 2022-23 season has come to an end.

Josh Norris Out For Season With Shoulder Injury

The season which was full of hope has not turned out that way for Norris and the Senators. In his eight games, Norris has contributed two goals, and one assist for three points. He has a decent 52.9 CF% and combined for an average time on ice of 17:59. Last year saw him record a career-high 35 goals along with 20 assists in 66 games.

When Norris was activated for the past three games, it was decided he would not take faceoffs. This was to aid with the rehab of his shoulder. This was clear he was not entirely at 100%. Therefore, shutting him down and opting for surgery probably makes sense.

What this means for Senators

This is just another sign that the club should be okay with the status quo for the 2022-23 season. With the prospects of new ownership and hesitation to make any hockey operation-type moves, the club needs a restart. The blessing for the Josh Norris injury is it has helped develop the game of young star Tim Stützle. The added responsibility on his plate has translated on the scoreboard. Stützle is a point-a-game player thus far, with 20 goals, and 23 assists, in 42 contests. Of course, the flip side of the coin is for Shane Pinto. Pinto has seen tougher matchups without Norris in the lineup. After a roaring hot start, Pinto has scored fewer goals (five) total since his October total of six. Hopefully, with a fully healthy Norris to start 2023-24, the playoffs will become a reality.

The post The Ottawa Senators Centre Josh Norris 2022-23 Comes to an End appeared first on Last Word On Hockey.