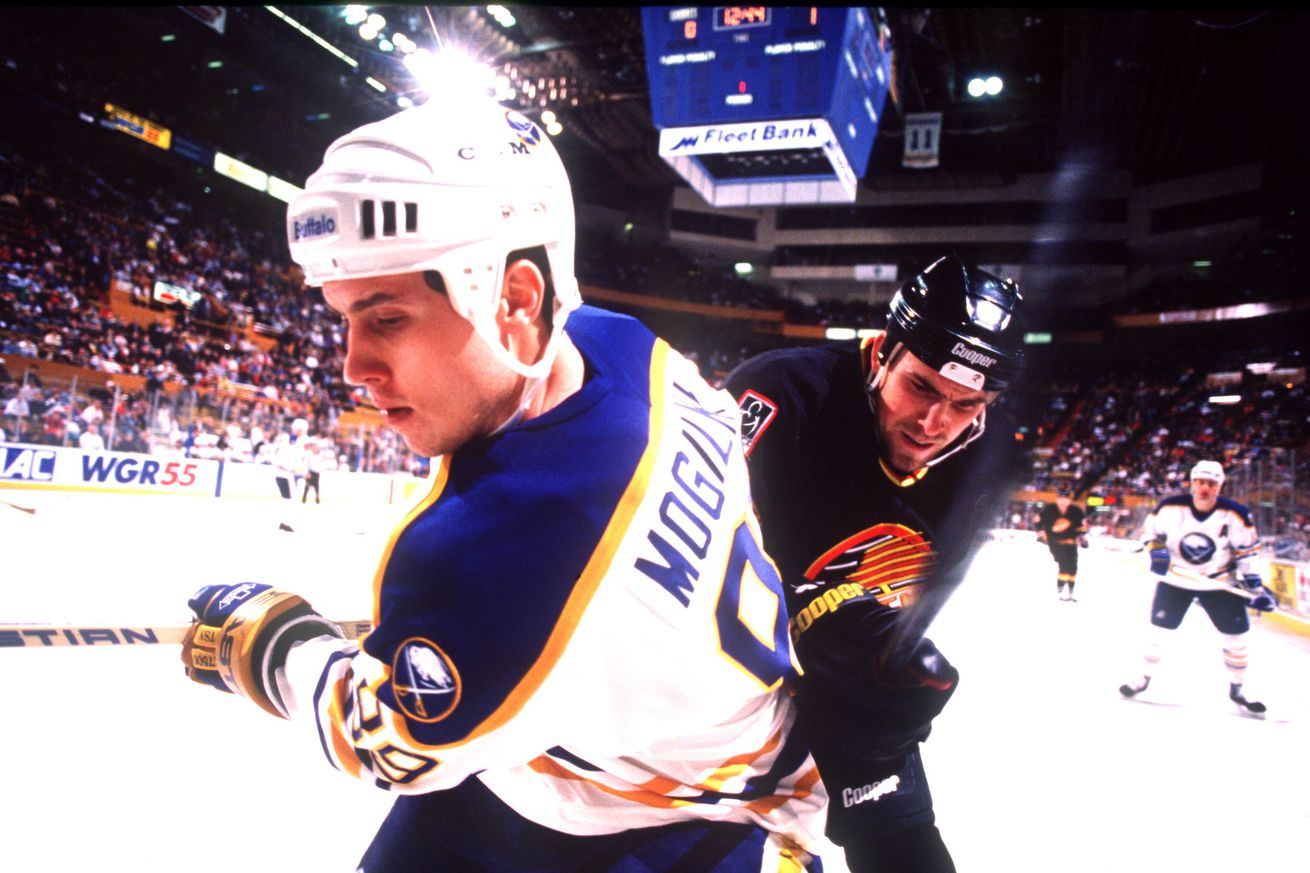 Who is the best player from each country to have played for the Sabres?

Sabres players throughout history have come from countries all over the world. Of course many have come from places like Canada and the United States, but there’s also been players from Latvia, Lithuania, Sweden and more who have suited up in the blue and gold (or black and red, in some cases).

This is part two of a two-part series. Did you miss part one? Check it out here.

Zemgus Girgensons is one of two Latvian players to have seen ice time in Sabres history, but he’s almost certainly the people are thinking of. Can you name the other Latvian who has suited up for Buffalo? I’ll give you a minute. While you’re thinking, let’s talk about Girgensons.

The 26-year-old was drafted by the Sabres with the 14th overall selection in 2012. He spent his first post-draft season in the AHL with the Rochester Americans, where he scored 17 points in 61 games. Since then, he’s appeared in 489 NHL games with the Sabres, averaging 0.28 points per game. He’s scored 61 goals and added 77 assists in his seven years of NHL experience. Girgensons made it to the 2015 NHL All-Star Game in large part due to votes from his home country.

He may not be the flashiest or most offensively-minded player out there, but Girgensons is likely the Latvian player Sabres fans are thinking of – rather than goaltender Peter Skudra, who appeared in one game with Buffalo in the 2000-2001 season after being picked up by the Sabres off waivers. According to Hockey-Reference.com, Skudra played just 27 seconds of 2-2 tie against the Mighty Ducks of Anaheim on October 20, 2000.

The asterisk answer to my previous question: Arturs Irbe, who didn’t see any playing time but served as an emergency back-up goaltender in one game in 2014. He was 47 years old and serving as the team’s goalie coach when Michal Neuvirth got injured. Jhonas Enroth went in, with Irbe coming in to back him up.

Zubrus, now 42, only played briefly with the Sabres in the 2006-07 season. He appeared in 19 games with Buffalo, scoring eight points (4-4) and putting 31 shots on goal. Overall, however, he had a 19-year NHL career, spanning from 1996 until 2016. Zubrus played with the Flyers, Canadiens, Capitals, Devils and Sharks in addition to the Sabres. Originaly a 1st round draft pick in 1996, Zubrus retired in 2016 – but he didn’t stay away from the rink for long. Zubrus was elected as President of Latvia’s national ice hockey federation in 2018.

Ndur only had a brief NHL career, lasting four years. He appeared in 69 games over the course of that career, 11 of which were with the Sabres between 1996 and 1999. After being drafted by Buffalo with the 69th overall selection in 1994, he spent a few seasons with the Sabres organization, then played for the Rangers and Thrashers. Aside from his NHL experience, Ndur also played a significant role with the AHL’s Rochester Americans, where he played between 1995 and 1998. He’d play with a whole bunch of other teams – from Hartford (AHL) and Norfolk (AHL) to Orlando (IHL), Columbus (ECHL), Kalamazoo (UHL) and Muskegon (IHL), along with overseas teams (Graz EC, Coventry Blaze, Nottingham Panthers).

Mogilny enjoyed a 16-year NHL career, but it all began in Buffalo. Drafted by the Sabres in the fifth round in 1988, Mogilny would turn out to be a steal once he came to the blue & gold. In his first season, he put up a respectable 43 points in 65 games. The next season, he averaged just over a point-per-game, and it got better from there. He recorded 76 goals and 51 assists for a whopping 127 points in just 77 games during the 1992-93 season. Eventually, he’d take his talents elsewhere – Vancouver, New Jersey and Toronto – but his time in Buffalo will never be forgotten by anyone who got to see him play.

Satan, now 45, played for the Sabres between 1996 and 2004. Originally a fifth-round draft pick of the Edmonton Oilers, he played parts of two seasons with Edmonton before coming to Buffalo. Satan was a fun, offensively-talented player to watch. Over the course of his eight seasons in Buffalo, he put up 456 points, including 232 assists. He’d continue to enjoy his playing career for ten more seasons post-Buffalo, including several seasons with Bratislava Slovan and the New York Islanders.

Hear me out on this one: it just didn’t feel right giving it to Rasmus Dahlin yet. The kid’s only played less than two full NHL seasons, and though he’ll undoubtedly take the reigns of this one sooner rather than later, for now, I’ve got to give that title to mainstay defender Henrik Tallinder. Tallinder, originally a second-round draft pick of the Sabres in 1997, was a huge piece of Buffalo’s backend for much of his time here. He played for the Sabres organization (including the Amerks) from 2001 until 2010. After leaving for a few seasons to play in New Jersey, he came back to Buffalo for the 2013-14 season. Overall, in nine seasons in Buffalo, Tallinder averaged 19:50 of ice time per game and recorded 116 points and 312 PIMs. Now 41, he rounded out his playing career with a few seasons overseas before hanging up the skates in 2018.

You’ll be forgiven if you don’t recognize this name. Recorded as the only player from the United Kingdom to skate for the Sabres in franchise history, he only ever played one game for Buffalo: November 15, 1970 against Montreal. He recorded one shot on goal. Perry was claimed by the Sabres from Oakland in the 1970 expansion draft, then claimed by Providence (AHL) in the 1971 reverse draft. Over the course of his career, he played in a handful of different lcoales – Oakland and Buffalo in the NHL, and with the New York Raiders, New York Golden Blades/Jersey Knights and San Diego Mariners of the WHA.

This one was perhaps the most difficult decision to make. How do you pick from a crop of talent like defensive highlight Phil Housley, growing superstar Jack Eichel, pinnacle captain Pat LaFontaine? Eichel may easily overtake this spot soon, but for now, I’ve got to hand it to Miller for how much of a key piece he was during his time in Buffalo. The net minder was drafted by the Sabres with the 138th overall pick in 1999 and turned out to be a real gem. He made his NHL debut in 2002 and played with the Sabres until 2014, appearing in over 540 games with Buffalo. To this day, he still holds some of the Sabres’ franchise goaltending records, and it’s hard not to include his name when talking about Buffalo’s goaltending greats. Since leaving Buffalo, Miller has played for the Blues, Canucks and Ducks. He spent this last season with Anaheim.

And not to be forgotten…

These two slipped under the radar, as NHL.com actually shows these players as from different countries (Regehr – Canada, Antipin – Russia). But we’d be remiss if we didn’t mention them.

The one and the only. Born in Brazil, Regehr (now 40) was drafted 19th overall by the Colorado Avalanche in 1998. He never actually played for Colorado, however, making his NHL debut with Calgary in 1999. Following a lengthy career with the Flames, Regehr joined the Sabres for one and a half seasons between 2011 and 2013. He finished out his career with the Los Angeles Kings, amassing 1,089 NHL games played.

Last, but not least, who can forget the legend of Victor Antipin? You’ve got to feel for the guy and how he was handled in Buffalo. The 27-year-old Ust-Kamenogorsk native played just 47 games with the Sabres in 2017-18, his first (and only, to date) North American experience. The defenseman has spent the rest of his pro career, bookending his time in Buffalo, with Magnitogorsk Metallurg. This past season, he put up a career-high 19 points in 60 games with the KHL club. Ah, what could’ve been.