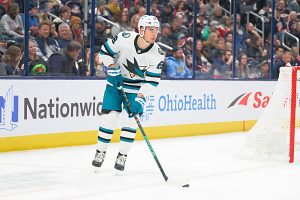 The rumour mill is churning faster than ever and with the deadline getting closer, it’s warranted. There are plenty of big names on the block and contending teams will come calling. It will be interesting to see where all these players go. But one team to watch for is the San Jose Sharks. The Timo Meier rumours are flying and he is linked to two Metropolitan Division teams.

On the latest episode of 32 Thoughts, Elliotte Friedman said Timo Meier is definitely one of the guys the #NJDevils like.

He also said he thinks other teams in the Eastern Conference expect the Devils to do something major.

With the Timo Meier rumours growing it is not a matter of if, but when Meier will be shipped out of San Jose. There will be plenty of suitors out for his services. Not only has the winger been linked to one Metropolitan Division team, but he is also now linked to two more. Meier is enjoying a great campaign and leads the sharks in goals (27) and is second in points (47). The rugged power forward will be a great addition to any club. But who are the team’s out to acquire him?

The Teams Linked To Meier

The Timo Meier rumours swirl in the tri-state area. As previously talked about, the New York Rangers are linked to Meier. In addition, it is their cross-town rival New Jersey Devils that are out for his services. The Devils have made strides and improvements and are no longer basement dwellers. But that does not mean they can’t improve further. Down the middle, the team is set with Jack Hughes and Nico Hischier, but they need help on the wings.

Ondrej Palat and Jesper Bratt are sensational talents, but the team needs more than those two. They lack another true top-six scoring winger. Not only does Meier fit the bill and can score goals, but he is also pals with fellow countryman Hischier. Not only does he fit the bill as a scorer, but he brings necessary muscle and physicality to the lineup.

When it comes to younger players the Devils have plenty to cough up. One player that could get the deal done is Alexander Holtz.

After the Timo Meier rumours swirl up north, they are trending down south. This one is a no-brainer for the Carolina Hurricanes. After bearing the bad news that Max Pacioretty is on injured reserve, the team is in search of scoring. Ironically, that is what Pacioretty was brought in for. Carolina is also searching for a second-line centre, but getting a pure scorer will do wonders for a team with cup aspirations.

Aside from Martin Necas and Andrei Svechnikov, goals coming from the wings have been down. Teuvo Teravainen and Seth Jarvis have only 11 goals combined. In fact, the bottom six have produced at a better rate than those two. Carolina is one of the best teams when it comes to expected goals share, but also one of the worst at finishing. For a team that’s destined to go on a deep run, adding a proven scorer fits the bill.

Meier would fit the style of play head coach Rod Brind’Amour likes to run. Carolina also has one of the best prospect pools in the league. It will be interesting to see what can go the other way but expect big moves to come as this team looks to escape the second round.