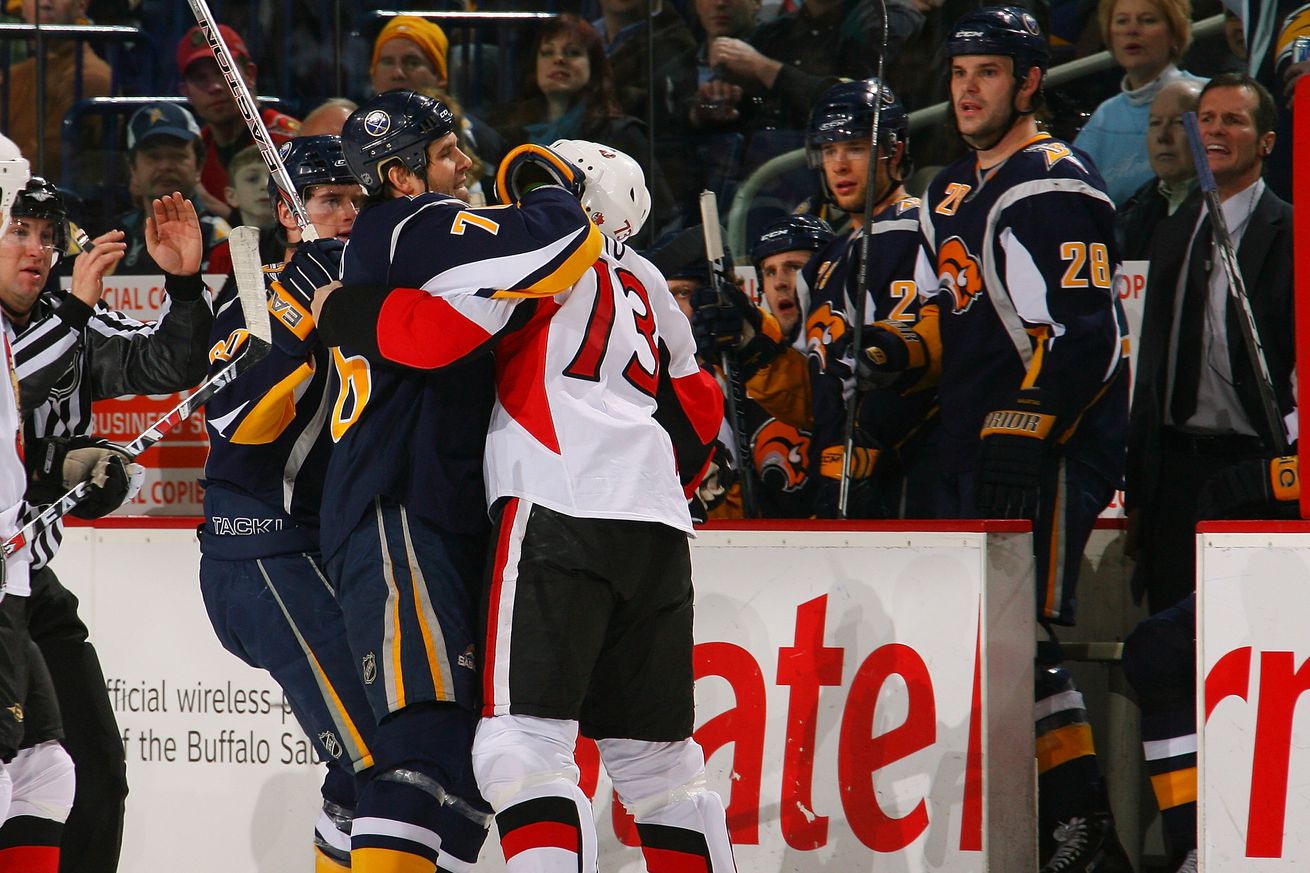 Buffalo vs. Ottawa has always been a classic

As SB Nation continues to commemorate “Rivalry Week,” we’d be remiss if we didn’t discuss the ongoing, historic rivalry between the Buffalo Sabres and the Ottawa Senators. In recent years, the rivalry has cooled off a little bit – as the Sabres’ rivalry with the Toronto Maple Leafs has continually ramped up, and the Sabres have put up less of a fight in the division – but historically, the Sabres and Sens have squared off with quite a bit of heat.

First and foremost, who can forget the epic bench-clearing brawl in 2007?

It all began when Chris Neil threw a vicious hit on Sabres captain Chris Drury. All hell broke loose after that, when Lindy Ruff sent out a ‘line’ of Andrew Peters, Adam Mair and Patrick Kaleta on the next play. All three were involved in the melee – including Kaleta, who was playing in his first NHL game – alongside Dany Heatley, Jason Spezza, Anton Volchenkov and Chris Phillips.

Not to be left out, the goaltenders also got involved, as Martin Biron squared off against Ray Emery. Goalie fights always add an extra layer to a brawl like this, and there’s no denying that it makes the events of that night all the more memorable. It didn’t last long before Peters stepped in for Biron and continued from there.

Don’t forget the time in 2009 when Peters got into it with Jarkko Ruutu, who…. bit him.

Of course, the Sabres-Senators rivalry isn’t all about throwing hits and landing punches. The two teams have an illustrious history, particularly in the Stanley Cup Playoffs.

The 2006 Eastern Conference semifinals are just one memorable example. Three of the five games went to overtime, while the other two games were settled by a one-goal decision in regulation.

In game one, the Sabres came out on top of a wild 7-6 game when Tim Connolly tied the game with seconds left in regulation before Drury sealed the win in overtime. It was Connolly’s second goal of the night, as Mike Grier, Teppo Numminen and Derek Roy (2) also scored for Buffalo.

Buffalo took a 2-0 series lead in the next game, thanks to goals from J.P. Dumont and Jochen Hecht. The Sabres continued to power on, with Dumont scoring the OT winner in game three. Although the Sens took game four, Buffalo won the series with a 3-2 victory in game five. Jason Pominville scored the game-winning goal, in overtime and with his team shorthanded.

Ryan Miller recorded a .923 save percentage in that series, allowing 13 goals on 169 shots faced.

Another moment in Sabres/Sens history that sticks out in my mind: Derek Plante’s overtime game-winning goal in 1997. Game seven, quarterfinals. I’ll never forget being in the arena for that game, and that goal. Six-year-old me was enthralled – but also felt bad for Mens goalie Ron Tugnutt, as he turned his head to watch the puck roll into the net, then collapsed onto his back with his hands over his face. Later, I’d watch the replay, and to this day, I can’t get Rick Jeanneret’s call out of my head.

Over the course of the teams’ history, these division rivals have faced each other 145 times. The Sabres have gone 70-55-10-10 in their history against Ottawa, scoring an average of 2.80 goals per game and allowing 2.64 goals per game.

Perhaps someone more mathematically inclined, or historically inclined, than I can tally up just how penalty minutes the two teams have amassed in their histories against each other.

Although the Sabres/Sens rivalry has cooled off in recent years, as both teams have fallen from the top of their division, games between Buffalo and Ottawa are still always fun. After all, you never know when the next “Derek Plante” style OT game-winner or “Peters/Biron vs. Emery” fight will break out.