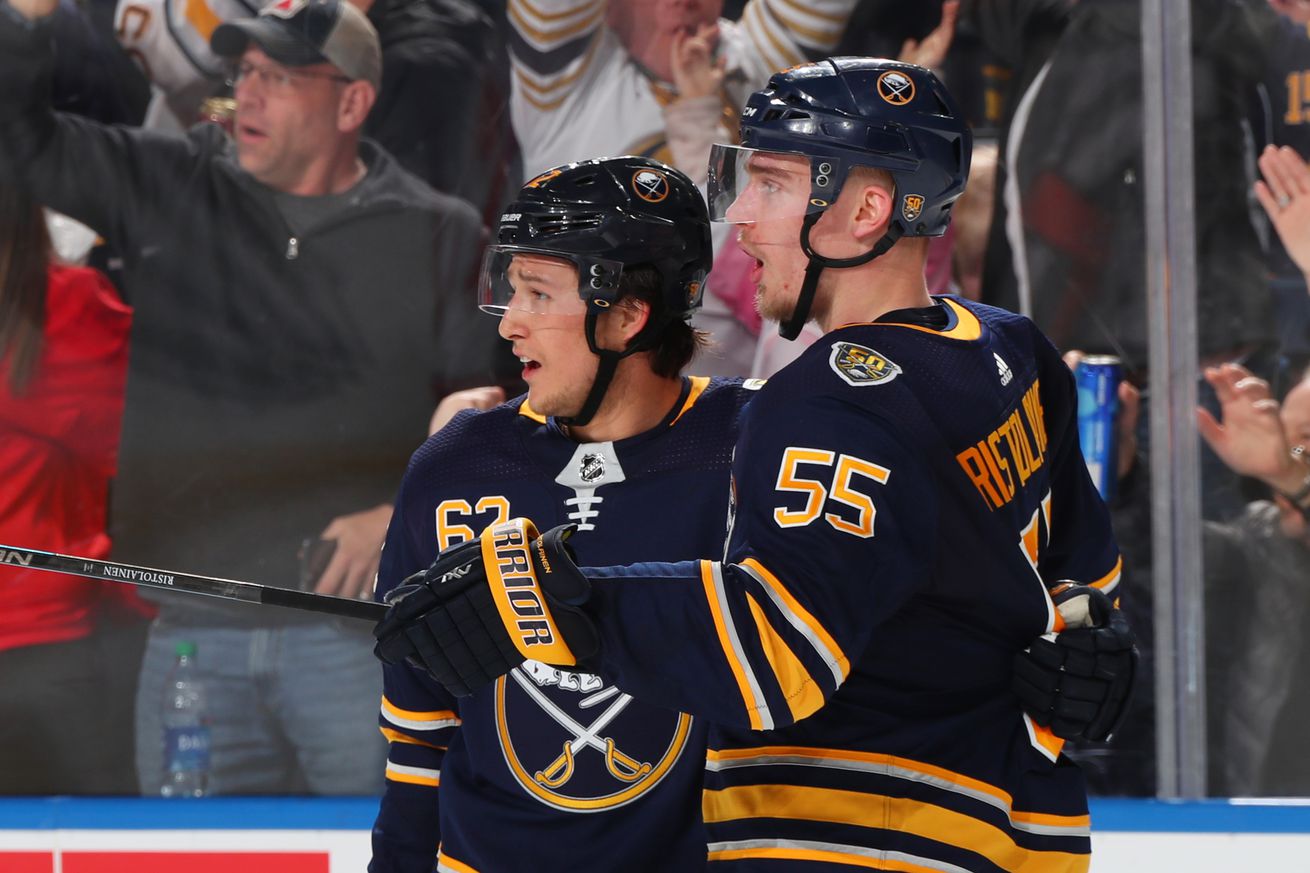 Buffalo doesn’t have many valuable pieces, but there are some assets that can help address areas of need

It goes without saying that first-year general manager, Kevyn Adams has a lot of work ahead of him in a truncated offseason. Though he already addressed one of his team’s most pressing deficiencies by acquiring a second-line center in Eric Staal, there is still a lot left on the agenda.

With the 2020 NHL Entry Draft just a day away, it has been speculated that leaguewide transactions could occur at a higher rate than normal leading up to, and during the event. Let’s first take a look at the Buffalo Sabres’ current areas of need. Then, we’ll examine which of their incumbent assets hold the most value on the trade market. It should go without saying, but this list will operate within the realm of reality, so no piping-hot Jack Eichel trade proposals.

With the departure of Johan Larsson looking all but imminent, the Sabres need a defensively-talented centerman to handle some heavy defensive zone-starts in 2020-21. While players like Curtis Lazar or Arttu Ruotsalainen could help in that regard on the fourth-line, neither of them is capable of absorbing the workload that Larsson has been responsible for over the last two seasons.

This isn’t to say that players like Stall and Jack Eichel need to be offensively-sheltered, but given the complexion of the Sabres’ depth chart on the wing, there isn’t a lot of defensive help to speak of. For that reason, a two-way centerman to play on the third line and allow Dylan Cozens to develop on the wing is a critical piece to the puzzle for next season.

The spectrum of opinions on Linus Ullmark remains relatively wide, but most fans will agree that Buffalo needs, at minimum, a rotation-capable starter to go along with him. After coming off a career-worst campaign where he battled vision issues, Carter Hutton simply cannot be relied upon to supplant Ullmark, who is an injury-prone commodity between the pipes.

Fortunately, the goalie market appears to be rather saturated this offseason. For that reason, it shouldn’t be cost-prohibitive to find a capable presence in the crease, even via trade. It should be noted that there are a couple viable free-agent options to consider here as well.

Following the unexpected loss of Lawrence Pilut, Buffalo now has a more pressing need on the left side of their blue line. Behind franchise cornerstone, Rasmus Dahlin, only Jake McCabe exists as a proven NHL-capable asset behind him.

While someone like Jacob Bryson could potentially fill-in on the third-pairing, forcing McCabe into a top-four role again would be a mistake. For that reason, Adams should be on the lookout for a second-pairing asset on the left side. This doesn’t necessarily need to be a long-term solution, but the current LHD depth is very weak.

The Sabres’ depth on the wing probably isn’t as dire as some believe, but as mentioned in the first section, there is currently a dearth of defensive assets throughout the forward corps. Of all the most pressing needs, this one seems like the easiest to address via free-agency.

That doesn’t mean that Adams should avoid the trade market here, but with so few assets of value to part with, perhaps he’d be better suited to pursue an unrestricted option, and save his tradeable commodities for something more urgent.

We’ll reiterate that this list isn’t going to include star players like Eichel or Dahlin. We also won’t list cap-restrictive assets like Jeff Skinner or Kyle Okposo. This section is reserved to reasonably-available pieces, particularly those that can be best leveraged to address one or more of the aforementioned areas of need.

Another caveat here is that we’ve drawn a faint line at the NHL-level. Due to the fact that the Sabres prospect group isn’t likely to garner much of a return individually, the following list is loosely restricted to bondafide NHL assets, players approaching NHL-readiness, and open futures (i.e. draft picks).

This one is pretty self-explanatory. None of the following assets listed are likely garner a 2021 first-round pick in return, making this the most valuable piece at the Sabres’ disposal.

Many fans have expressed interest in the team moving their first rounder this season, but with a high-end forward prospect almost certain to be there at eighth-overall, there just aren’t many (realistic) superior alternatives. A player like Anthony Cirelli for instance, would cost eighth-overall and more, if Tampa Bay even decided to make him available.

As far as the 2021 pick goes, a team like the Montreal Canadiens, who are rumored to be shopping two-way center, Philip Danault might be a team who would be enticed by that selection, especially if they feel it can be flipped to address another area of their team.

Let me make this clear right off the bat – I am not in favor of the Sabres trading Sam Reinhart. That said, as a pending RFA who is expected to receive a hefty raise, I’d be remiss if I ignored the possibility of Adams using him as a trade piece.

It’s important to mention that the addition of Staal probably reduces the chances of Reinhart being dealt. There was always a possibility that if Adams couldn’t acquire a second-line center with either his defensive surplus, or the use of futures, Reinhart could have ultimately been leveraged for one.

Obviously, that situation is resolved, and aside from an equal-or-better winger coming back, trading the 24-year-old would make very little sense. Still, as long as he is unsigned, the possibility remains.

It feels like Rasmus Ristolainen has been on the trade block for the last half-decade. Every offseason, he’s the most frequently-discussed trade piece, and every year, he’s back on the opening night roster.

Last summer, Jason Botterill got very close to dealing the 25-year-old blueliner to the Winnipeg Jets, but it ultimately fell through. After spending a year under Ralph Krueger, it actually appears that the Sabres will be less likely to shop him now, given that his head coach has only had positive things to say about him.

To analytics supporters like myself, this is discouraging, but that doesn’t change the fact that he’s likely the third-most valuable trade asset at the Sabres’ disposal. Poor metrics or otherwise, general managers around the league still value 40-point defensemen. Given the Sabres’ RHD logjam, and their deficits in other areas, a Ristolainen trade remains a possibility, just not a likelihood.

Was there a more disappointing Sabre than Brandon Montour last season? After coming over via trade at the tail-end of the 2018-19 campaign, he certainly didn’t look like the type of player you would trade a first-round pick (and more) for.

His 18 points in 54 games paced him out for a career-low, and despite his skill as zone-exit entity, there was very little he did well last season. As of last month there were even rumblings that the Sabres might not qualify him as an RFA (which seems unlikely).

Either way, there is no way Adams can recoup anywhere near what Botterill paid for him, and it’s only a little more than a year later. If the Sabres elect to keep Ristolainen aboard, there is little justification to giving Montour the $4 million AAV deal he’s expected to command.

This one is interesting. Nothing about Colin Miller’s game really justified his standing as a frequent healthy-scratch last season. Even stranger was the fact that Krueger refused to play him on regular basis, despite his GM parting with two draft picks for him the previous offseason.

The only way Miller is traded in the coming months is if Krueger truly doesn’t see him as a top-six defender (though he absolutely should). In that case, perhaps he ends up being the odd-man-out on the right side of the defense.

As was the case with Montour, there is little to no chance the Sabres get the same type of return that they initially invested to acquire Miller. That said, there would absolutely be a market for his services, should they elect to shop him.

After another mediocre season of development, this time with the Rochester Amerks, Casey Mittelstadt is approaching “Alex Nylander territory”. The former eighth-overall pick from 2017 is far from a shoe-in to make the opening night roster. It wouldn’t be a surprise to see the Sabres try to dangle him on the trade market as a piece to something larger.

Because the Sabres are a strong candidate to try and leverage a few of their mid-level prospects, I decided to make note of which of them could be sent out. Defenders Mattias Samuelsson and Ryan Johnson both seem like good candidates, given the youth of the Sabres current defensive corps, and the fact that neither of them were particularly impressive in their D+1 year.

Rasmus Asplund is another name that seems to constantly find its way onto trade speculation pieces, but just how much value does he have? At 22 years old, he struggled mightily in 29 games with the big club last season, registering just three points.