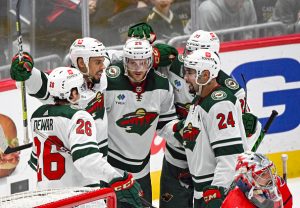 It’s time for another round of NHL rumours. Things are getting hot and heavy and many names are speculated on as we roll toward the March 3 trade deadline. Defencemen are a hot commodity and the Minnesota Wild need cap space. This means a Matt Dumba trade is very possible. Today’s NHL rumours looks at the veteran blueliner’s future after the deadline.

All NHL rumours come from the original source and are subject to change.

Rumour: The Athletic’s Michael Russo said that Wild general manager Bill Guerin alerted Duma and his representation about a possible trade. Dumba carries a $6 million cap hit that wraps up at the end of this season. The Regina, Saskatchewan native told the media that Guerin has been upfront about a possible trade as the deadline draws closer.

Dumba has four goals and eight assists in 43 games this season. However, he’s been a healthy scratch for the first time since April 2016. This might mean that his time in the Twin Cities could be drawing to an end. He recorded a career-high 14 goals and 36 assists in the 2017-18 season.

What a Matt Dumba Trade Means

The writing seems to be on the wall for Dumba after Matthew Boldy signed a long-term contract extension with the team. Minnesota has plenty of dead cap space next season after buying out Zach Parise and Ryan Suter. The Wild will have over $14.7 million in cap space gone for the next two seasons after the dual buyouts. Space will be at a premium and there’s no room for Dumba.

However, the Wild don’t want to lose out on an asset for nothing. They’ll try to send the 28-year-old to another team, but have to sweeten the pot a little bit. Defencemen like Dumba could be useful to a contender and he could be an intriguing rental. The healthy scratches could scare teams away because of Dumba’s struggles or it could renew interest because the Wild may part with the defenceman quicker.