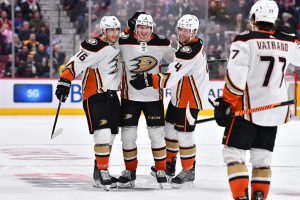 It’s time for a second helping of NHL rumours to start your work week. The upcoming NHL trade deadline on March 3 means players are going to be on the move. Things are going to be difficult for some general managers, but it’s not a problem for the Anaheim Ducks. We all know that the Ducks are going to be sellers at the deadline. The team has a few pieces and one of those is a certain Swedish defenceman. Today’s NHL rumours takes a look at how likely a John Klingberg trade will be.

All NHL rumours come from the original source and are subject to change.

Rumour: The Daily FaceOff’s Frank Seravalli released his list of trade targets and the former Dallas Stars blueliner is on that list. Klingberg was hoping for a long-term deal in the off-season. However, he could only muster a one-year, $7 million deal with the also-ran Ducks. This makes him an unrestricted free agent and an ideal rental.

5⃣ new names added to the board.

The Gothenburg, Sweden native has six goals and nine assists for 15 points in 40 games this season. He wanted to use the one-year deal he signed in the summer as a chance to cash in. However, things haven’t gone to plan this season for Klingberg. The big-money deal for the veteran blueliner may not be as large as he thought it was going to be.

What a John Klingberg Trade Means

Despite his struggles, Klingberg is still going to be a valued addition at the deadline. He can still score goals and quarterback the power play when he’s on his game. Signing the short-term deal was the right move for both sides. Anaheim can flip Klingberg to a contender and the defender can try and parlay that into a decent contract.

Klingberg’s full no-trade clause expired at the turn of the year, so his tenure in Orange County, California isn’t likely to be a long one. The Ducks will try and get something tangible for him. Klingberg can try to revive his game and maybe get his hands on a Stanley Cup ring. He could also be a good consolation prize if someone misses out on Erik Karlsson.