The Buffalo Sabres are searching far and wide for their next head coach, bringing in candidates from all over the hockey world. That includes, according to Darren Dreger of TSN, Rikard Gronborg of the Zurich Lions. Gronborg has already interviewed for the position according to Dreger. 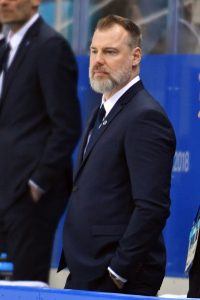 This is not the first time that Gronborg’s name has been connected to an NHL coaching search, but to this point, the 52-year-old has remained overseas. Serving as a staff member for the Swedish national team for more than a decade, Gronborg has almost countless international medals including Olympic silver as an assistant in 2014. He won the World Championship gold as head coach in 2017 and 2018 and has been leading the powerhouse Zurich team for the last three seasons.

In NHL history there have been only two European-born and trained head coaches, meaning Gronborg would be breaking new ground should he land the gig in Buffalo. It would certainly be an outside-the-box move for an organization desperate for answers, but he wouldn’t be coming in completely blind. Remember, Sabres franchise defenseman Rasmus Dahlin is very familiar with Gronborg from his time with the national program for Sweden, including time together at the 2018 Olympics.

Still, with so much pressure on Buffalo to turn things around, going with a rookie head coach may not be the best idea. The team has not been able to find any sort of stability or consistency over the last several years, switching coaches and managers as quickly as players. Gronborg is just one of many candidates considered for the role, including interim head coach Don Granato.