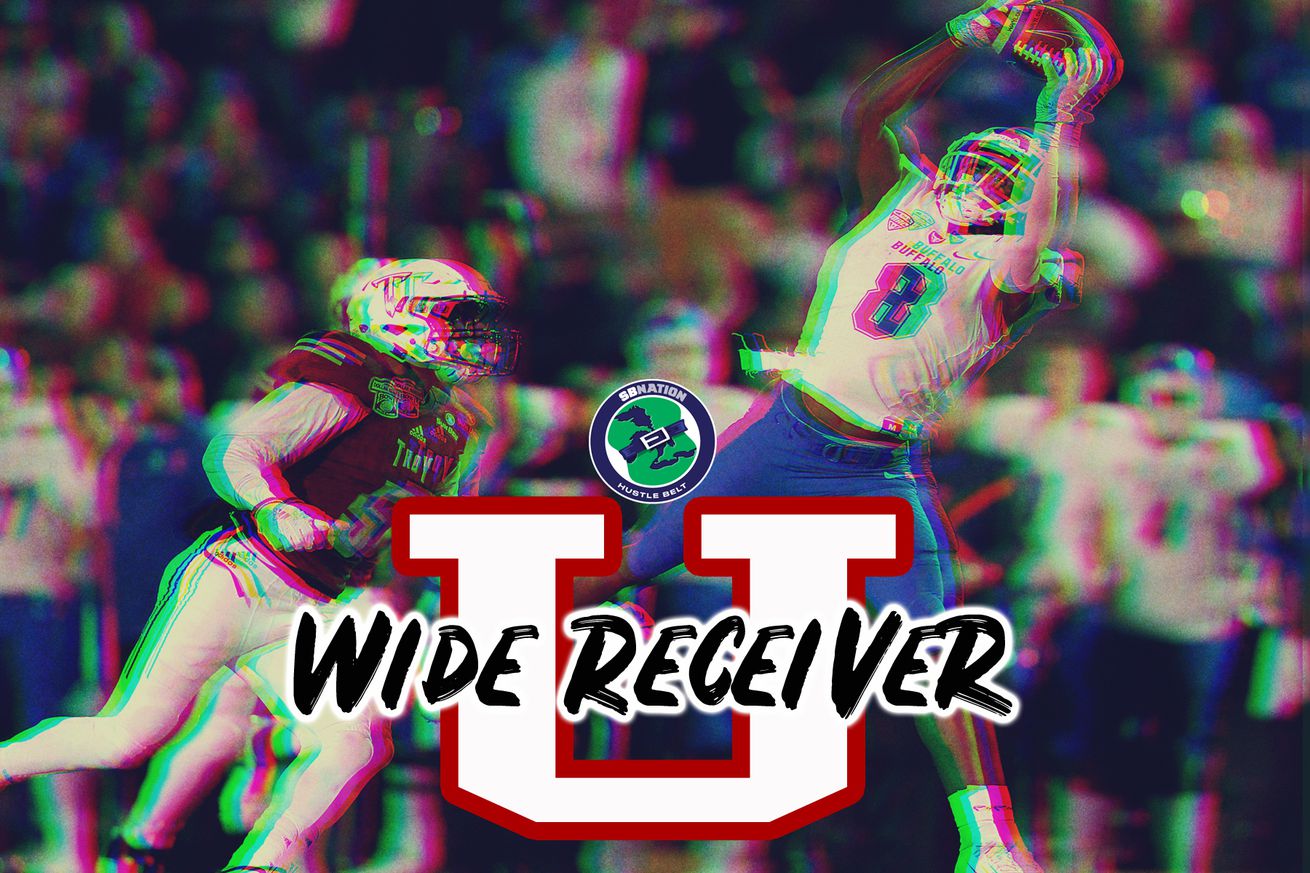 The MAC’s top school for wide receivers is…

The Positional U Series continues this week with Wide Receiver U.

You can find the first two parts here: QB U and HB U.

Our six voters ranked their top three choices at the wide receiver position with a point value assigned to each spot.

The team with the most points, wins the title of Wide Receiver U.

So who did we select as WR U?

In a close battle, WMU picked up just enough first place votes to win the title. The Toledo Rockets and Central Michigan Chippewas were right behind them with nine and eight points respectively.

The Broncos have had a long history of reliable and speedy receivers. Here’s a brief look at the bigger names to play in Kalamazoo since 2000.

Dave: Greg Jennings, Corey Davis, and Jordan White. That’s a hard trio to top for any MAC school. And their numbers would be even higher if they didn’t also have great running backs too that cut into their receiving numbers! CMU edged out Toledo for second place with me because of how well Antonio Brown played in both college and the NFL. However, the Rockets have had a slew of amazing WRs and have probably had the most depth at the position but they don’t have the name recognition as the Western or Central alums.

Steve: Picking Wide Receiver U for the MAC wasn’t too tall of a task. Western Michigan has college football’s all-time receiving yards leader. Corey Davis strung together three-straight 1,400 yard seasons during his tenure in Kalamazoo and led the Broncos to the Cotton Bowl and the greatest MAC season of the 2010s. Former Super Bowl champion (and Madden legend) Greg Jennings also got his start with the Broncos, ranking first in the FBS in receptions and third in receiving yards during a tremendous 2005 campaign. Speaking of reception leaderboards, don’t forget Daniel Braverman ranked second on the chart in 2015. Also, Jordan White led the FBS in both receptions and receiving yards in 2011. You won’t find another MAC program that consistently dominates the wide receiver statistics like Western Michigan, and that’s why the Broncos are the easy choice for Wide Receiver U.

Toledo’s produced plenty of NFL talent at the position as well, earning my No. 2 ranking on the list. Diontae Johnson and Cody Thompson are recent additions to the Rocket NFL alumni base, while Lance Moore and Bernard Reedy were talented wideouts of yesteryear for the program. Lastly, Central Michigan checks at No. 3 in with the most impactful receiver on the list at the professional level in Antonio Brown. The Chippewas had two of the conference’s top three receivers in receptions and yardage a year ago, and they’ve also exuded talent at the position over the years with Titus Davis and Mark Chapman.

James: Honestly, if I were able to declare a tie, I’d want to put CMU and Toledo right at 1A and 1B. Both programs boast excellent receivers, who achieved success at both the college level and the pros, and have been amongst the best MAC programs at the position for a fairly long time now. Ultimately, I had to give the edge to Toledo for having a deeper level of success at churning talent at the next level over a long period of time. Lance Moore, Diontae Johnson, Cody Thompson, Alonzo Russell and Bernard Reedy all had or currently have had success in the NFL and other pro leagues. There’s almost never a season I’ve previewed the MAC where Toledo hasn’t had at least two, if not more, weapons on the outside passing game. Sure, CMU had Antonio Brown, but beyond that, there hasn’t been much NFL success at the position despite having had All-Americans and first-teamers. (I do wonder if Mark Chapman ever accepted his CFL salary offer as a first-overall draft pick, or if Bryan Anderson ever got an NFL offer, if that would have affected these results.) At the end of the day, you can’t deny the depth and development in Toledo.

Zach: Toledo and WMU have to be the top two here, but I’m going with WMU at 1 because they’ve produced 2 legit WR1’s at the NFL level (Jennings and Davis). Toledo might have one with Diontae Johnson, but he’ll need to prove that over the course of the next few years. I included BGSU at 3 because of how great that offense was during the Dino Babers years. Dieter and Lewis were great to watch during that era.

Jordan: For WR U, it’s awfully hard to go against Central Michigan. Antonio Brown alone would be worth the nod (the past few years notwithstanding), but throw in guys like Titus Davis and Mark Chapman on top of it and you’ve got a serious WR pedigree. WMU is close with guys like Corey Davis and Braverman but the Broncos haven’t had an extended period of quality WRs. Lastly, I put Toledo for having consistent play from their wide-outs, although UT doesn’t quite have the top-end productivity that CMU and WMU had.

Sam: I bet the majority of you all know about Willie Snead and I won’t have to do much explaining on him, but there are three others you may not know about. Dante Ridgeway was a finalist for the Fred Biletnikoff Award and contributed 3,030 yards to the Cardinals and he is also in the Ball State HOF. KeVonn Mabon had 2,800 yards and 12 touchdowns. Dante Love had 2,700 yards and, if it wasn’t for a career ending injuring, he probably would’ve had well over 3,000 yards and set a new BSU record for career receiving yards. The stats speak for themselves.

Thoughts? Did we get it right? Vote now to tell us who you think is WR U!