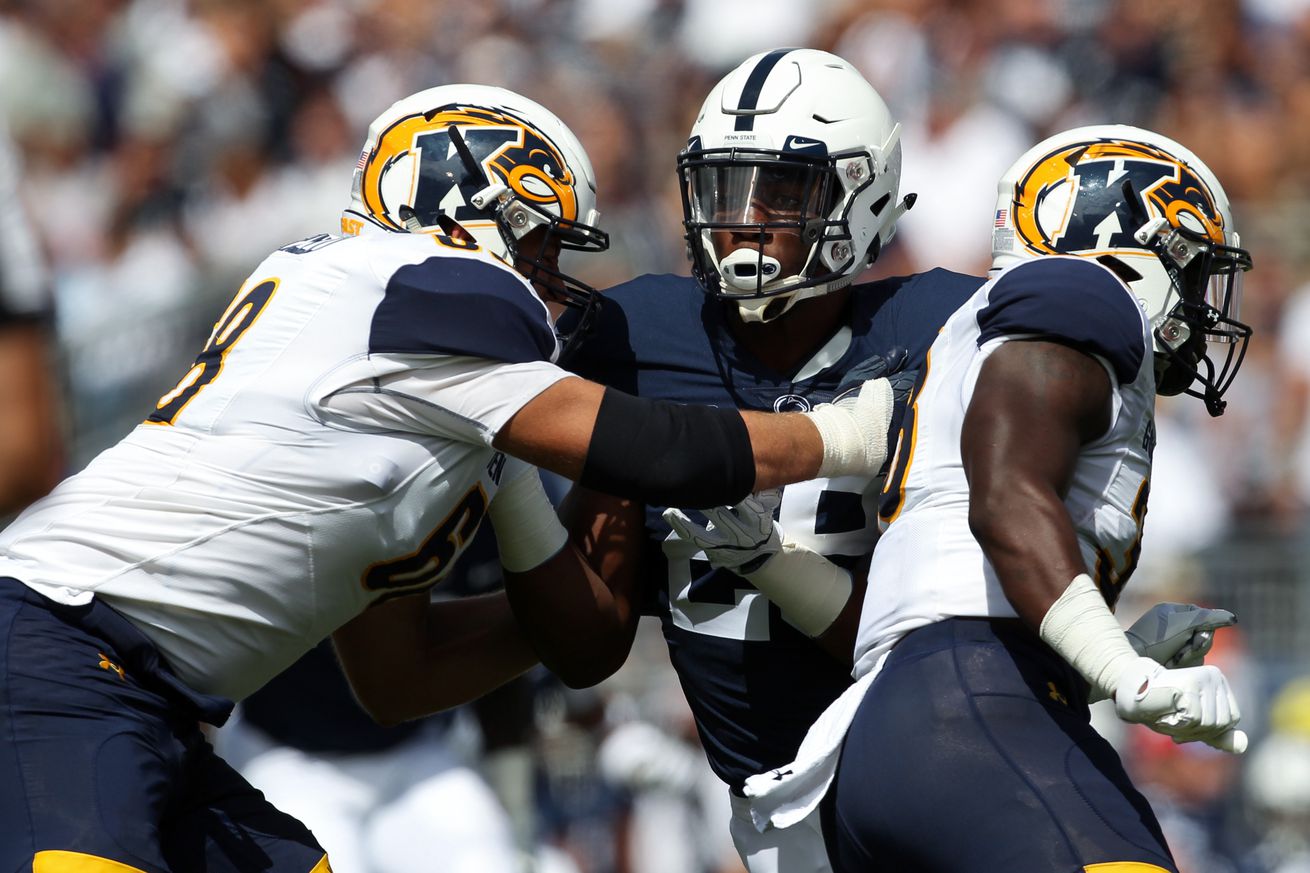 The MAC was the first conference to withdraw from a fall football season. Every game will be sorely missed, but especially these non-conference matchups.

We were supposed to wake up early on Saturday mornings in September with open eyes and open stomachs, ready to digest entire days of non-stop college football. Every year, college football welcomes 130 fanbases with open arms to enjoy the pageantry, the festivities, and engage in silly debates about conference superiority or what the definition of a “quality loss” is.

While we are not completely bereft of the sport of college football since six conferences are currently scheduled to play a fall season, the season already feels like a lost year. One of the most enjoyable times to be a college football fan is during non-conference play, when fanbases are hungrier for football than ever, wide-eyed teams believe in their season dreams, and when upsets like Appalachian State over Michigan send shockwaves around America.

There were supposed to be 11 ranked non-conference matchups in the month of September, but zero survived the rescheduling process due to the COVID-19 pandemic. On August 8, the MAC axed its entire season citing health concerns, removing dozens of contests from the 2020 schedule. We’ll miss every single one of them and will never take MACtion for granted, but here are 10 non-conference games in particular that leave a sting behind of a destroyed memory that we longed to create this fall.

It’s a new era of Kent State football under head coach Sean Lewis. The Golden Flashes overcame their biggest hurdle as a program by winning their first-ever bowl game last December, shocking Utah State 51-41. The thrilling Frisco Bowl aired frequently on ESPNU all offseason long, keeping Kent State’s signature “Flash Fast” offense fresh on our television screens. Riding the momentum of the historic moment, Kent State is equipped an impressive 4-game win streak, but there’s no longer a chance to test it in Happy Valley against the No. 7 Nittany Lions. And after a season featuring 20 touchdown passes and only two interceptions, on a 69.3 percent completion rate, quarterback Dustin Crum is on a mission to prove he can out-duel the quarterbacks on some of the nation’s top teams. Unfortunately, that valuable opportunity will not come in front of 100,000+ fans in Central Pennsylvania. The Vegas odds heavily favored the reigning Cotton Bowl champion Nittany Lions, but this could have been a chance for Crum and the Golden Flashes to prove on a national stage that there’s a new program and new culture in Kent, OH, if Kent State kept Penn State within reasonable striking distance.

If a random number generator became a college football program, it would be the Pittsburgh Panthers. Pitt regularly knocks off ranked opponents, taking down two teams in the final AP Top 10 in 2016 (eventual national champion Clemson and Penn State), ruining Miami (FL)’s undefeated season on the final week of 2017, and ending UCF’s absurd regular season win streak last fall. But Pitt also loses a lot of games it shouldn’t and rarely finishes above 8-5. The Panthers always seem to be a beatable opponent for MAC opponents (less than a minute away from losing to Eastern Michigan in the Quick Lane Bowl last December), and the 2019 MAC champion Miami RedHawks would be a more-than-worthy challenger for the ACC foe on opening Saturday. Pitt’s star-studded secondary led by Damar Hamlin versus Jack Sorenson and Miami’s loaded receiving corps would have been an interesting matchup to witness if this matchup transpired.

Buffalo finished with the best record in the conference at 8-5 last season, but the Bulls finished with a demeanor far superior than an 8-5 team. They won six of their last seven with a sturdy offensive line, a relentless pass rush, and a lethal halfback duo of Jaret Patterson and Kevin Marks. With many of their on-field personnel returning, Buffalo was perfectly set up to inflict some damage against strong non-conference challengers such as Kansas State. The last six times we saw Patterson line up in the backfield, he exploded for 140 or more yards each time. Could Kansas State’s Elijah Sullivan-led defense be the answer to the unstoppable Patterson and his partner-in-crime Marks, or would Buffalo roll over a solid Big 12 program on the road? Not being able to witness this potential “upset alert” game is upsetting, to say the least.

The last time Toledo and Tulsa met on the same football field, offensive magic happened. Former Rocket kicker Jameson Vest sunk a game-winning field goal as time expired to put an end to a 54-51 touchdown festival in 2017. Ex-Toledo quarterback Logan Woodside threw for 458 yards and six touchdowns, Cody Thompson had 178 receiving yards and a hat trick in the end zone, and Terry Swanson rushed for 139 and a score. Meanwhile, Tulsa, which blew a 28-7 lead, ran all over the Toledo defense with three rushers eclipsing 130 yards on the ground. Toledo and Tulsa have always boasted respectable offensive identities, and with Jason Candle and Philip Montgomery still at the helm, this game was bound to light up the scoreboard. On the Tulsa side, the Zach Smith-to-Keylon Stokes connection, combined with Shamari Brooks’ running ability would be difficult to stop. Meanwhile, Toledo’s offense was built to counter with star running back Bryant Koback bulldozing from the backfield and the cannon arm of Eli Peters leading the aerial attack.

Central Michigan hasn’t beaten a Big Ten team since 2014, but the Chippewas were presented with a golden opportunity to take down the Huskers at Memorial Stadium on Week 2 of the pre-COVID-19 schedule. Fellow MAC West member Northern Illinois went into the same venue three years ago and shut down Nebraska’s offense to silence the Lincoln crowd. With realistic hopes of doing the same, Central Michigan returns a solid team under Jim McElwain after surging from 1-11 in 2018 to MAC West champions in 2019. Outside linebacker Troy Brown and wide receiver Kalil Pimpleton are budding stars on both sides of the ball destined to build on great 2019 campaigns. While Central Michigan experienced a quick rebuild from under McElwain, Nebraska hasn’t had a winning season since 2016 and has mightily struggled in non-conference play under Scott Frost — falling to Troy once and Colorado twice in two seasons. Neither the Chippewas nor Cornhuskers are playing football this fall, so the result of this showdown in the Midwest will forever remain a mystery.

Cincinnati checked in at No. 20 in the launch of the 2020 AP preseason poll after faring 22-5 over the last two seasons under Luke Fickell. One of many frontrunners in a stacked American Conference, the defensive-minded Bearcats are aiming to play in their first New Year’s Six bowl under the current CFP system. However, prior to cancelation, Western Michigan circled this game as an opportunity for its first signature non-conference win of the Tim Lester era. The Broncos experienced massive turnover this offseason losing their former 3-year starting quarterback Jon Wassink and reigning MAC Offensive Player of the Year LeVante Bellamy, but they still have many offensive pieces in place to be a formidable squad. With Biletnikoff Award watchlist member Skyy Moore lining up opposite of the Cincinnati secondary and guard Mike Caliendo manning the trenches, Western Michigan retains enough veteran talent to serve as a threat in non-conference play. It’s a shame the Broncos’ trip to Nippert Stadium against a Top 25 team is no more.

Pac-12 After Dark receives plenty of attention for Saturday night chaos, but late San Diego State kickoffs usually match the madness as well. In recent bouts with MAC teams, the Aztecs have been involved in wild finishes on the west coast, including an overtime thriller against Eastern Michigan in 2018 and a dramatic showdown versus Northern Illinois in 2017. Longtime head coach Rocky Long left the Aztecs, handing the keys to the program’s former face (and former Ball State coach), Brady Hoke. Before the plane tickets to Southern California were voided, Toledo had an interesting matchup on its hands. Toledo and San Diego State play contrasting styles as the Rockets often feature high-powered offenses under Jason Candle, while the Aztecs prefer to play defensive-oriented games with scores in the 10s and 20s. The MAC and Mountain West hope to move their seasons into the spring, and if this meeting somehow happens, whoever emerges from this matchup may wind up gaining ground in a spring AP Top 25 poll.

The MAC was all-too familiar with Kentucky last fall. Both Toledo and Eastern Michigan fought noble battles in the first half, but the Wildcats were too much for the MAC challengers to handle. In 2020, Kentucky must adjust to life without Lynn Bowden Jr. running the show from virtually every skill position on offense. Dustin Crum and Kent State would likely exhibit the best passing attack in this matchup, and if the Golden Flashes’ rushing defense limited Kentucky, a possible upset may have brewed in Lexington. Sean Lewis invaded SEC country and nearly left with a win against Ole Miss in 2018, and with a stronger program, a battle with Kentucky would be a sneaky-good non-conference matchup on the 2020 schedule.

Ohio and Marshall met every season from 2009-15 and the former MAC rivals resumed their series in Huntington, WV last fall. In a closely contested battle between the teams decked in green and white, Marshall claimed a 33-31 victory behind a 43-yard pass from Isaiah Green to Xavier Gaines in the fourth quarter. Both the Bobcats and Thundering Herd must work in new quarterbacks after the graduation of Ohio QB Nathan Rourke and the transfer of Marshall QB Isaiah Green. Still, this game was set to be filled with numerous players to watch at the skill positions, including Ohio’s powerful halfback De’Montre Tuggle and Marshall’s versatile tight end/wildcat quarterback Xavier Gaines. Five of the last eight games between the two opponents have been decided by four points or fewer, so you’re usually bound to get a good one when Frank Solich and Doc Holliday bring their consistent programs to the gridiron.

Eastern Michigan and Army is a growing non-conference “rivalry”, as the two opponents squared off eight times from 2008-18. The Eagles and Black Knights took a hiatus from their series in 2019, but before the MAC axed the season, a rematch was slated for mid-October. Army is 8-1 in the series history, with the lone Eastern Michigan victory occurring in 2012. But the Eagles were inches away from upsetting the Black Knights at West Point in 2017. Electing to go for a 2-point try and win rather than the tie, former Eastern Michigan running back Ian Eriksen was tripped up and flipped while diving for the end zone. The tip of the pigskin landed on the grass, less than a yard away from glory. Army now holds a 4-game winning streak in the series, but Chris Creighton’s team would have earned a great opportunity to dismantle the Black Knights and their iconic triple option attack for a late non-conference matchup in 2020.

Every program dreams of entering a historic football landmark like Bryant-Denny Stadium or The Big House, and stunning the entire college football universe. Buffalo originally had that opportunity before the cancelation of the season with a trip to the Horseshoe in Columbus scheduled for September 19. History suggests an easy win for Ohio State which owns a 35-1 all-time record against programs from the MAC. But Buffalo now loses an opportunity to make a statement against a likely AP Top 3 program in a national television slot. With the nation’s only returning pair of 1,000-yard running backs in Jaret Patterson and Kevin Marks, several returning members from an offensive line which allowed the second fewest sacks in 2019, and a tenacious pass rush spearheaded by Taylor Riggins and Malcolm Koonce, there was a lot going for the Bulls. Last year’s Buffalo team held a 10-7 halftime lead against a New Year’s Six team in Penn State, so the bright lights aren’t too much for the Bulls to handle. We all wanted to see what Patterson and the gang could muster up against the Buckeye defense, but unfortunately, we’ll only be able to play the game of hypotheticals for the 2020 MAC schedule.