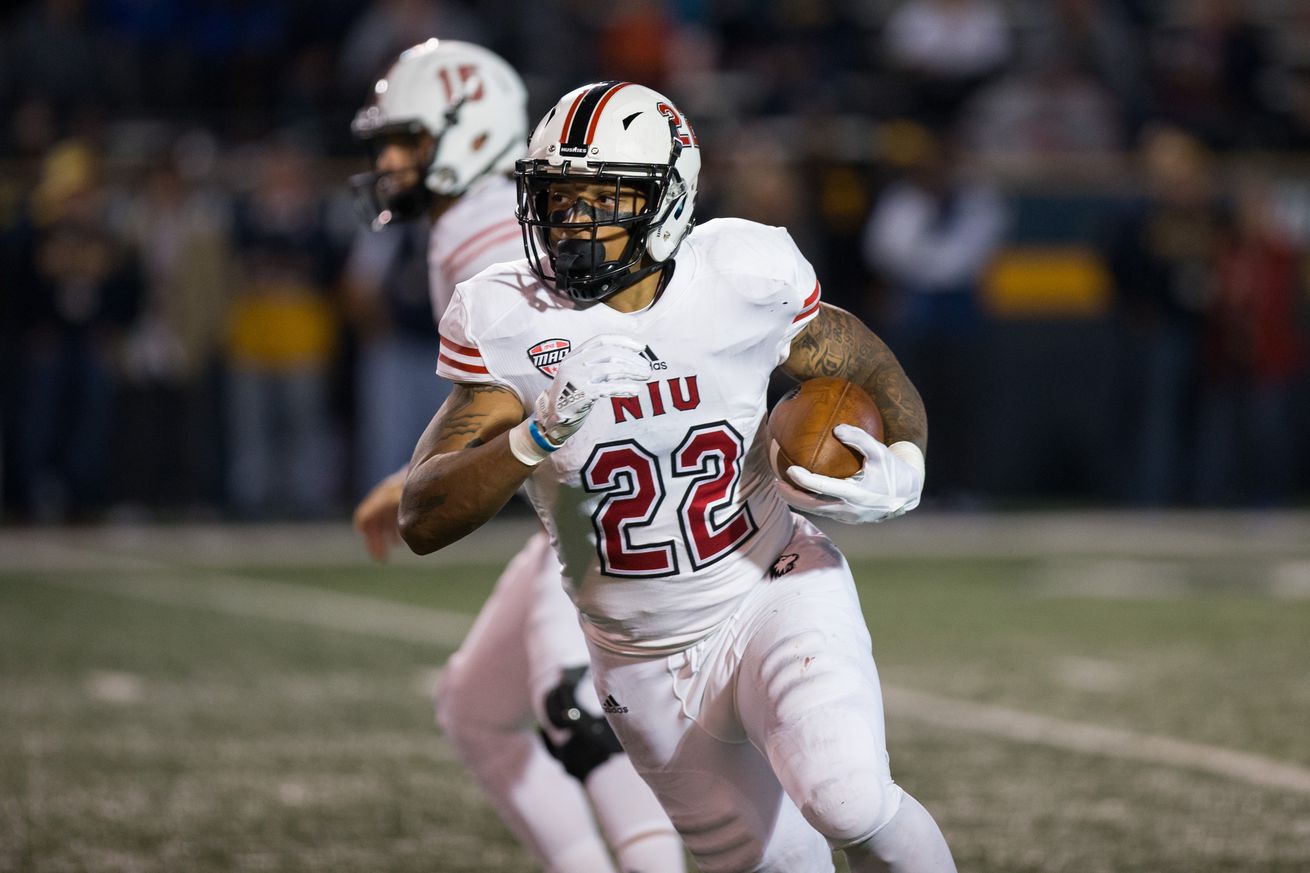 Several MAC teams were hit hard by the transfer market this offseason. But there is hope, with worthy players serving as the ‘next man up’.

The rise of the transfer portal continues to alter the college football landscape each offseason. Graduate transfers are becoming increasingly commonplace, and player movement in the sport is higher than ever. The MAC was hit particularly hard by outgoing transfers this season, but with every departure comes an arrival of the next man up. Below are the largest transfer vacancies MAC teams must address, and the right player to fill each void.

Northern Illinois already got a sneak preview of life without Harbison during its season finale last November. Harbison announced his entry into the transfer portal roughly 4.5 hours before the Huskies were set to kick off against Western Michigan on Senior Night. The Huskies’ defense commanded the team to a 17-14 upset, but Northern Illinois’ feature back was evidently missed in the contest.

With an inconsistent passing game over the past two seasons, Harbison was the driving force of the NIU offense, posting back-to-back 1,000-yard rushing campaigns. In three years as a Huskie, the star running back averaged 4.8 yards per carry and rushed for 16 touchdowns. He will complete his college career at Charlotte, a program coming off its first winning season in its short-lived FBS tenure.

Nettles is by no means an unfamiliar face when it comes to Northern Illinois football. He served as the tertiary back behind Harbison and Marcus Jones as a freshman in 2018 and played second fiddle to Harbison during the 2019 campaign. The rising junior from Romeoville, IL posted consistent stats in both seasons — 61 carries and 217 yards in 2018, and 67 carries 274 yards in 2019. Nettles earned a bulk of his production during NIU’s 49-0 rout of Akron last October. He is still searching for his first career touchdown, but having an experienced back leading the way could lead to a smooth transition for the post-Harbison era.

James Morgan departed to FIU, Jarret Doege headed to West Virginia, and now Grant Loy is following in the footsteps of his predecessor Bowling Green quarterbacks by testing the transfer market. For three straight offseasons, Bowling Green’s starting quarterback left the program. The trend began in the Mike Jinks era and is continuing after Scot Loeffler’s first year as head coach. Morgan leveraged his successful FIU tenure into a fourth round selection at the 2020 NFL Draft and Doege emerged as West Virginia’s starter toward the end of last season. Although he’ll likely ride the bench behind incumbent starter Bo Nix, Loy is hoping for similar development at Auburn. In 2019, Loy completed 155/203 passes for 1,137 yards, throwing for six touchdowns and 11 interceptions. He was a solid asset in the run game, dashing for 427 yards and four touchdowns on 100 attempts in his final season as a Falcon.

In a surprising decision by the NCAA before the 2019 season, McDonald was denied eligibility to play at Bowling Green one season after transferring from Boston College. McDonald followed his former offensive coordinator in Loeffler from the ACC to the MAC and is expected to take the reigns from Loy for the 2020 season. Albeit a diminutive sample size, McDonald’s college career has gone rather smoothly. In the second half of blowouts over UMass and Holy Cross in 2018, he completed 7/8 passes for 118 yards and two touchdowns, producing an astronomical 293.9 passer rating. Those numbers won’t sustain, but McDonald has years of practice and repetitions under his belt which should allow him to make a seamless transition to a full-time starter.

Northern Illinois’ defensive tackle pairing of Jack Heflin and Weston Kramer was set to be one of the more experienced and talented units in the MAC. But Heflin, already the owner of a kinesiology degree, announced a graduate transfer to Iowa in May. Heflin led the Huskies in sacks and tackles for loss in 2019 by registering 3.0 and 8.5, respectively — all while playing only nine games. The defensive tackle also starred for the 2018 Huskies with career highs in sacks (6.0) and tackles (33). Now, his talents will be utilized by Kirk Ferentz and the Hawkeyes, which are currently slated to play Northern Illinois on September 26 if the season continues as planned.

Taylor made a brief collegiate debut in Northern Illinois’ non-conference battle with Utah last fall. He recorded two tackles and 0.5 tackles for loss in limited playing time. The 6’2”, 290-pound defensive tackle will be the likely recipient of increased playing time due to Heflin’s departure. At East St. Louis High School in Illinois, Taylor proved to be a nightmare for opposing offensive lines, recording 15 sacks and 285 tackles as a four-year starter. He utilized a redshirt last fall, so in-game experience and enduring the grind of a full season in practice should allow Taylor to ease into the new role when the Huskies take the field again.

Knight will forever hold a special place in Kent State history. The Golden Flashes notched their first bowl win in program history on December 20, 2019, besting Utah State, 51-41, in a thrilling Frisco Bowl. Knight won the defensive MVP honors with nine tackles, 2.5 tackles for loss, and 1.5 sacks. The strong safety wasn’t a Golden Flash for a long time — he spent one year in the MAC after transferring from Maryland. But he was there for a good time with 74 tackles and 10.5 sacks wearing the blue and gold. With a degree in hand, he’s on the move to the West Coast to wear different shades of blue and gold as a UCLA Bruin.

There was a moment in 2019 where Kent State sat 3-6, down 21 points in the fourth quarter to a streaking Buffalo squad. The Golden Flashes were in the midst of a miraculous comeback, and that comeback came to fruition thanks to the special teams efforts of Salaam. The reserve safety blocked a punt deep in Buffalo territory in the fourth quarter, allowing Kent State to tie the game at 27 one minute and four plays later. Salaam played 10 games in 2019, wrapping up for 31 tackles and defending two passes. His production increased toward the end of the year, making nine stops in a win over Ball State before adding seven tackles in the Frisco Bowl. Kent State’s secondary lost Knight and cornerback Jamal Parker in the offseason, but Salaam’s rise at the end of 2019 should allow the unit to rebuild and pick up where it left off when play resumes.

Buffalo caught fire in October and November to finish with the best overall record in the MAC last season at 8-5. The men in the trenches, on both sides of the ball, were instrumental in the Bulls’ late-season success. Onwuka started at defensive tackle for a unit which registered 2.5 sacks per game. He ranked third on Buffalo with 3.5 sacks, while adding 8.0 tackles for loss, and 43 total tackles.

Buffalo retains its two best pass rushers on the defensive line, Taylor Riggins and Malcolm Koonce (combined 16.5 sacks in 2019). Onwuka’s absence leaves a vacancy in Buffalo’s 4-3 defense, a spot which McGee should occupy. McGee entered the program after spending time at Highland Community College in Kansas. Once arriving on campus as a sophomore, he appeared in all 13 of the Bulls’ matchups in 2019, managing 11 tackles and a sack as Onwuka’s backup. The rest of the Buffalo defensive line, including McGee’s co-defensive tackle Eddie Wilson, is back and should remain one of the Bulls’ greatest assets in 2020.

At South Florida, Brinkman is replacing another tight end named Mitchell — Mitchell Wilcox, a three-time Mackey Award watchlist member with the Bulls. South Florida’s newest tight end, Brinkman, spent his last four seasons catching passes and blocking for the Huskies. From 2016 through 2018, the 6’3” tight end only hauled in a combined 11 receptions. But his usage skyrocketed in 2019, finishing third on Northern Illinois in receptions with 34 and second in yards with 445. Brinkman averaged over 13 yards per reception — a remarkable number for a tight end — so the Huskies will miss his downfield presence, as well as his solid run blocking ability.

Northern Illinois’ offense under Thomas Hammock featured a heavy dose of tight end in 2019. Multiple tight end sets were common, and while Brinkman caught 34 passes, fellow tight end Daniel Crawford saw similar production with 37 receptions for 443 yards. Thus, the Huskies need a ‘next man up’ for their second tight end alongside Crawford. There is a wide array of names to fill Brinkman’s void, but Lersch is a reasonable player to enter that role. Lersch began his Huskie career as a linebacker before transitioning to the offense. In 2018, he caught six passes for 65 yards and two touchdowns, before corralling two receptions for 29 yards and a touchdown as a junior. With a defensive pedigree, Lersch is a versatile player and also thrives as a blocker, which should make him a key cog in bolstering NIU’s run game in 2020.

Council brought versatility to the Zips’ offensive line. As a junior, he lined up all over the place, starting seven games at left guard, two games at center, two at right tackle, and one more at left tackle. He primarily started at right tackle as a sophomore and left guard as a freshman, serving as the ultimate utility player for Akron’s offense. The graduate transferred was a highly coveted prospect this offseason, and in April, he elected to continue his college football career in SEC country and become an Auburn Tiger. Losing arguably the team’s strongest, most athletic offensive lineman on the roster could be a huge blow to Akron, hoping to shed off its 0-12 record and establish a promising foundation for the 2020 season.

Not many linemen exhibit the versatility shown by Council, but Muldowney is prepared to take over Council’s primary position at left guard entering 2020. He earned three starts at the spot in 2019 in late-season games against Buffalo, Bowling Green, and Ohio. The former walk-on is now a scholarship player and a likely starter. Muldowney’s promotion can bring promise to a new era of Akron football, one season after the team allowed an FBS-worst 4.83 sacks per game, while its offense rushed for an FBS-worst 47.6 yards per game (1.75 per carry).

Lorbeck is one of five Northern Illinois starters from the 2019 season to enter the transfer portal. Along with Heflin, he is one of two departing NIU defensive linemen headed for Iowa City. Lorbeck stepped into the starting defensive end role in 2019 to replace outgoing senior Josh Corcoran. He found ample success in the role with 2.0 sacks, 5.5 tackles for loss, and three forced fumbles in 11 games. Lorbeck announced his transfer from the Huskies in May, and declared his arrival in Iowa on Twitter on June 22. As a grad transfer, he will be able to play immediately and is set to face his former school on September 26 if the schedule continues as planned.

Northern Illinois was hit particularly hard by the transfer market, so the Huskies will rely on a bevy of young developing talent for the 2020 season. Northern Illinois has boasted one of college football’s strongest pass rushes over the past three years, and the Huskies hope that will continue through prospects like Mattox. At 6’2” and 238 pounds, Mattox is of similar build to former NIU All-American defensive end Sutton Smith. As a freshman, Mattox wrapped up for one sack against Vanderbilt and seven total tackles in limited action. He formerly starred in the state of Illinois as a high schooler, landing All-Area and All-State selections two times each.