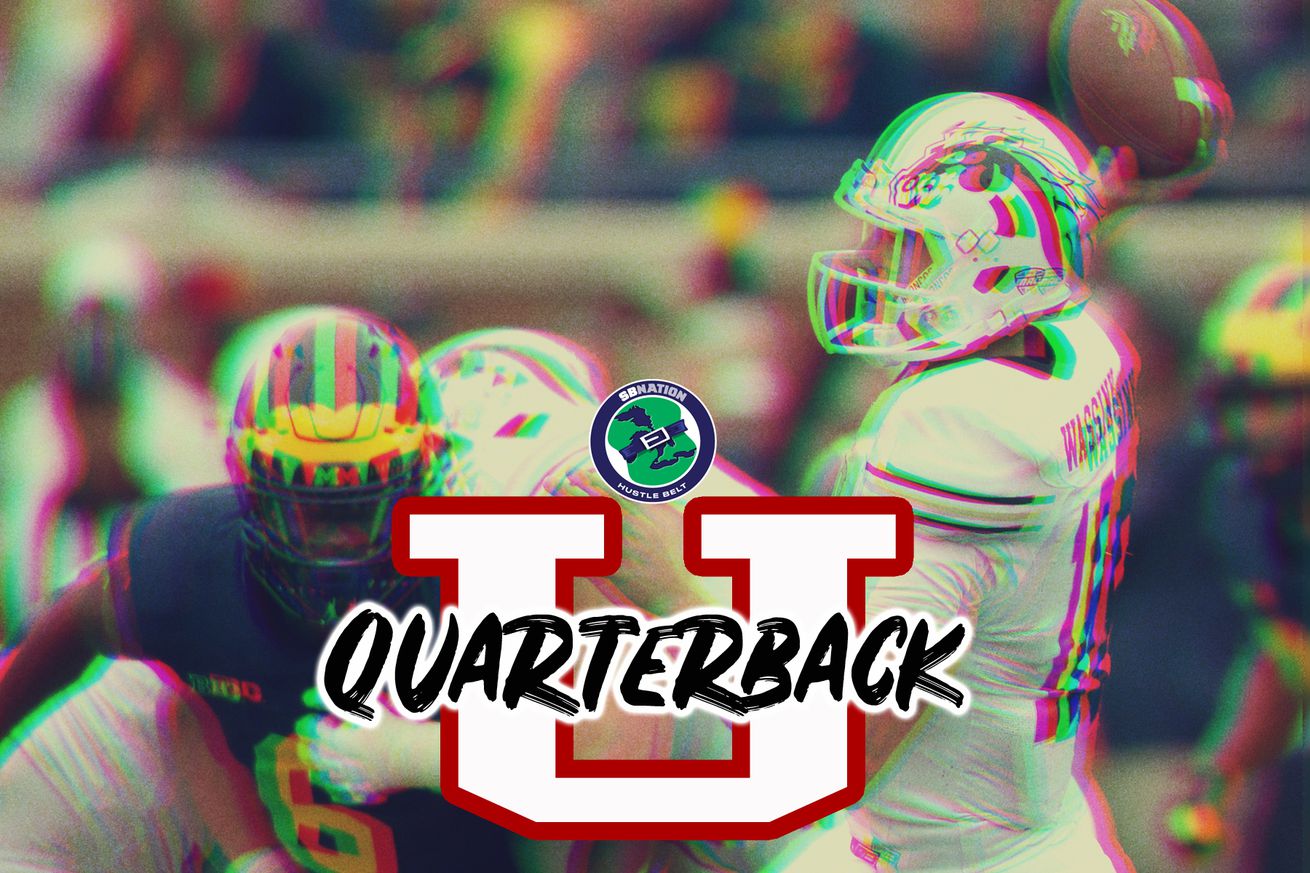 Which MAC program will be the one to claim the MAC’s title of QBU?

Where better to start our Positional U series than with the quarterbacks.

Six Belters – Steve Helwick, James Jimenez, Zach Follador, Jordan Rinard, Sam Thilman, and myself (Dave) – undertook the difficult task of looking through the all the stats and players in the MAC for the past twenty years to come up with our list for each position group.

However, since it’s near impossible for all of us to come to a consensus, we needed a way to judge the votes in a fair manner. We decided that we’d each select our top three schools for each group with a point value attached to each position.

The team with the most points, takes home the title of Quarterback U.

Quarterbacks have been a huge part of the MAC’s success over the past couple decades.

And the MAC has seen it all; from pocket passers to dual-threats and even a Heisman finalist. The list of talented QBs made this a hard one to nail down. Just look at these names:

And that’s just a small fraction of the great QBs to play in the MAC.

So who did we choose as Quarterback U?

In a slightly shocking upset, NIU took the top spot with 13 points. Players like Jordan Lynch, Chandler Harnish, and Josh Haldi top the Huskie record books, with Lynch even finishing third in the Heisman voting back in 2013.

The Huskies topped the Central Michigan Chippewas, who came in a close second. There was a three-way tie for third between the Toledo Rockets, Ball State Cardinals, and Miami RedHawks, each of whom got three points. The Ohio Bobcats (2) received points as well.

The Huskies have always been known as a more of a running team and have utilized QBs as a game manager more so than an offensive weapon – with the exception of Harnish and Lynch. However, the consistent play of their quarterbacks and the success they had in the early 2010s, lifted NIU to the top spot.

Here’s a brief look at the Huskies’ starting quarterbacks and their stats since 2000 (bracketed years are the years they started):

Dave: I had to go with CMU as the #1 school here. Dan LeFevour and Cooper Rush were amazing talents. LeFevour still holds the top spot for career passing yards in the MAC and is second in passing touchdowns. I have NIU second mostly due to just how dominant the Huskies were with Harnish and Lynch. And Lynch finishing as a Heisman Trophy finalist bumped them up a bit, as that’s a rare feat for a G5 school. They also had good game managers like Josh Haldi and Phil Horvath in the early part of the 2000s that helped them beat teams like Alabama, Maryland, and Wake Forest. Toledo edged out Western Michigan for me, as they always seems to have a dangerous quarterback – Gradkowski, Woodside, Owens, Dantin, etc – and are always at the top of the MAC West. Yes, the Broncos had Hiller and Terrell but (outside of 2016) they haven’t been as consistently successful as the Rockets have been.

Steve: Selecting one QBU, or even a top three, was an incredibly difficult decision. There were six MAC schools that could reasonably wind up as QBU for me — Northern Illinois, Toledo, Central Michigan, Ohio, Western Michigan, and Bowling Green. Each of the aforementioned schools has at least 2-3 program-defining quarterbacks since the turn of the century. When narrowing down my list, I focused on the following criteria — (a) which program had the BEST quarterback, and (b) which program had the most quarterback depth. Ultimately, I selected the Northern Illinois Huskies as the top dog because how often does a MAC team have a Heisman finalist quarterback? Despite not serving as a traditional pocket passing quarterback, Jordan Lynch was a generational player in college football and wound up in New York due to his dominance with the read option. A former-record holder for QB rushing yards in a game, Lynch rushed for 1,800 yards and 19 touchdowns in back-to-back seasons. Now, looking at sheer depth, Chandler Harnish is a viable No. 2 quarterback on the hypothetical depth chart as a former MAC Offensive Player of the Year with 3,216 yards passing and 28 touchdowns in 2011. Former MAC champion quarterback Drew Hare takes the third spot in my Huskie QB rankings, allowing Northern Illinois to exhibit the best quarterback in the MAC and solid depth in order to be well worthy of the QBU honor.

I settled on Toledo for the second spot, primarily due to Logan Woodside and Bruce Gradkowski, who both enjoyed a season as the conference’s top player. Central Michigan winds up third thanks to the passing heroics of perennial winner Dan LeFevour, Hail Mary legend Cooper Rush, and the ever-consistent Ryan Radcliff.

James: When considering quarterbacks, I discounted NIU a bit for a few reasons. For one, they ran a fairly unique offense which was difficult to prepare for. Quarterbacks were often right at the top of the rushing charts, with passing not as big an option for most of these QB’s. The ability to move the ball downfield via the pass is the most important part of being a quarterback (even one who is the stereotypical “dual-threat.”)

The NIU QB class is also not terribly deep. After Jordan Lynch and Chandler Harnish, there isn’t really a lot there I felt reasonably good about in the last 20 years. Even arguing for Marcus Childers being a MAC Freshman of the Year, he was eventually replaced and transferred. Hell, Jordan Lynch being converted to a running back in the pros is about all you need to know on that front.

I know there will be complaints of homer bias in my choice to make CMU the #1 QB school, but I feel from a numbers and depth perspective, I think there’s a lot to like with Central’s roster. The LeFevour-Radcliffe-Rush run of three straight QB’s starting 3+ years isn’t something to overlook, and the pro success of LeFevour and Rush is also a point in their favor. All three of those QB’s are tops in their program in most passing stats, and also ushered some of CMU’s greatest successes in the last 20 years. Even Shane Morris had a great year at CMU in his graduation year, and Dormady and Moore really helped CMU in their quest for a MAC West title last season.

I voted Ohio third primarily on the strength of some sneaky good QB’s such as Tyler Tettleton and Nathan Rourke, who are both great QB’s who never got their due because they couldn’t clinch that ever-elusive MAC championship. They deserve a shout-out.

Zach: It was tough for me to go between CMU and NIU, because LeFevour and Rush were so prolific. I ultimately ended up going with NIU first because Jordan Lynch led them to an Orange Bowl, which is a height CMU has never reached.

Jordan: For QBs, I feel like NIU is an excellent representative for the conference. Jordan Lynch was an otherworldly talent during his career there, Chandler Harnish was also highly productive, and the Huskies had solid play from guys like Drew Hare. I had Miami at #2 thanks to Big Ben and Zac Dysert (although Brett Gabbert has an equally high ceiling). I put Ohio at #3 because they have had some remarkably steady play from guys like Tyler Tettleton and Rourke.

Sam: I think this position is pretty self explanatory. When you look at Wenning and Davis what can you say other than studs. Wenning and Davis were a part of Ball State teams that actually produced team success and the records they had/still hold, and if you don’t know their stats look them up phenomenal. And one quick thing to add: Davis was top 10 in Heisman voting, how many MAC Players are even in top 50 let alone top 25 in Heisman voting? Plitt is recency bias on my part, even though he hasn’t had the best team success the preseason award watch lists nominations speak for themselves.

Did we get it right? Tell us who you think is Quaterback U in the poll below, and be sure to sound off in the comments too!