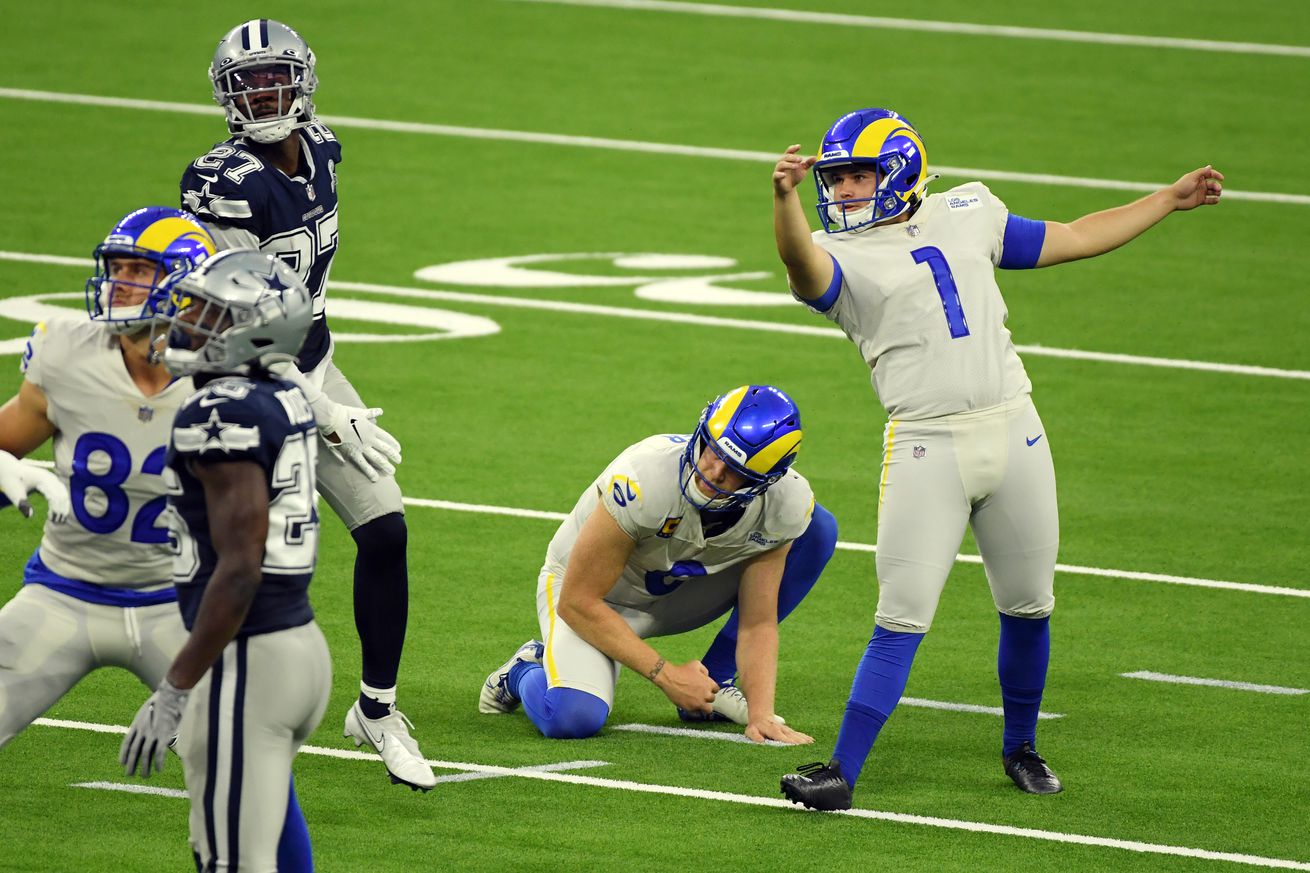 The MAC isn’t playing on Tuesdays and Wednesdays this fall, but many players who formerly made their mark on November weeknights are now taking snaps on Sundays (and Thursdays and Mondays). A total of 69 former MAC players across all 12 member institutions appear on NFL rosters. Here are five notable performances delivered by MAC alums in an eventful Week 1 of the season.

Sloman was one of two 2019 MAC players selected in the NFL Draft last April. A seventh round pick, the former RedHawk beat out Lirim Hajrullahu and Austin MacGinnis for the starting kicker role in Los Angeles. Per Greg Beachem of the Associated Press, Rams head coach and ex-RedHawk wide receiver Sean McVay provided his reasoning for selecting Sloman: “Sam just made a push the last couple of days. The pop that he has in his leg, the youth that he has… Sam was the guy we felt best about.”

Sloman’s NFL debut on Sunday Night Football got off to a rocky start. The Miami product sunk an extra point on the Rams opening possession, but his first field goal attempt was not ideal. Sloman doinked a 29-yard field goal off the left upright in the first quarter. But the All-MAC kicker responded with confidence in the second period and drained a pair of field goals from 35 and 31 yards to keep Los Angeles within one point of Dallas at halftime. Sloman’s Rams won 20-17, so his two field goals and two extra points proved to be vital in his introduction to the NFL.

We’ve seen Ben Roethlisberger play plenty of football ever since his days suiting up for Miami in the early 2000s. But it’s been 364 days since the two-time Super Bowl champion last threw on the pads and lined up under center. Roethlisberger’s return Monday night proved one thing — the 17-year veteran is still a quality quarterback in the NFL.

Facing the Giants defense on ESPN’s Monday Night Football, “Big Ben” completed 21/32 passes in a 229-yard performance. His first impressive throw of the season pierced between two New York defenders and landed in the outstretched hands of rookie receiver Chase Claypool. He gained his rhythm after that and fired two touchdown passes to JuJu Smith-Schuster and one to James Washington. It was the 30th time Roethlisberger finished with three touchdown passes and zero interceptions in his storied NFL career and his first such game since December 2018.

An incredible catch by @ChaseClaypool on the sideline! #HereWeGo

Scharping is back in familiar territory on the frontlines of the offensive line depth chart. The Northern Illinois grad started all 53 games during his tenure in DeKalb, and he’s now a Week 1 starter for the first time in his NFL career. Scharping, primarily an offensive tackle at NIU, is now the left guard for the Houston Texans. The 2019 second round pick started the final 14 games of last season and he blocked well enough for the reigning AFC South champions to retain the role headed into 2020.

Scharping made a key block on the first touchdown of the new NFL season. On 2nd and 1 in the first quarter, he bullied Chiefs defensive tackle Tershawn Wharton out of the play, paving a path for running back David Johnson to find paydirt on a 19-yard run Thursday night.

Tom Brady enjoyed working with a 5’10” MAC wide receiver the last 11 years under the name of Julian Edelman. After moving down south, he now has 5’9” Bowling Green standout Scotty Miller as a weapon on the new-look Buccaneer offense. Miller won’t receiver the attention of Tampa Bay’s Pro Bowl wideouts Mike Evans and Chris Godwin, but he looked just as stellar in Week 1. Only Godwin had more catches and yards than Miller’s 5 and 73 from Sunday in the Superdome. The former track star is a speed mismatch for many defenders when lining up in the slot and he should increase his production from the 13 receptions and 200 receiving yards he attained as a rookie.

At Western Michigan, Davis finished as college football’s all-time leader in receiving yards with 5,278. The former top-5 draft pick added plenty of receiving yards to his NFL résumé in a 16-14 Monday Night Football win over the Denver Broncos. Davis torched the Broncos secondary en route to his third 100-yard receiving game in his fourth year as a Titan. His seven catches were tied for the second-best mark of his career, and he caught all but one attempt quarterback Ryan Tannehill directed his way.

Davis’ greatest highlight of the night was a brutal stiff arm he applied on Denver strong safety Kareem Jackson following a long catch-and-run. The bronco logo may be on the opponent’s helmet this time, but this highlight shows what Davis used to do every time he suited up for the Broncos in his four years at Western Michigan.