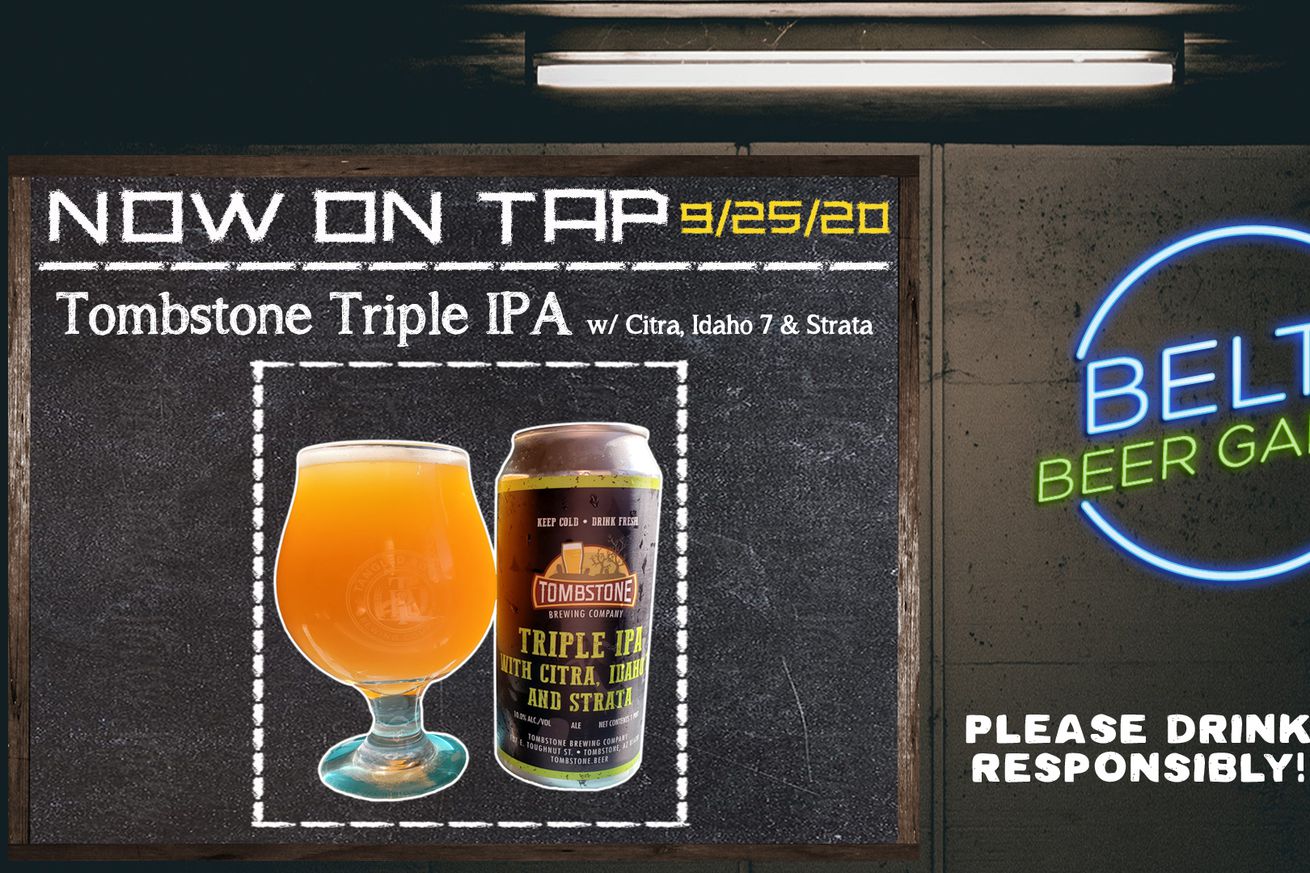 Tombstone Brewing opened up in the Town Too Tough to Die (Tombstone, Arizona) back in 2016. Today they can be found in the bigger cities of Arizona (Phoenix, Tucson, Flagstaff) and at the brewery but it’s quite difficult to see them outside of the Grand Canyon State.

However, I was able to get my hands on a pair of their new hop-bomb. And today I have their Triple IPA, this version of which was brewed using Citra, Idaho 7, and Strata hops. Each pint packs a wallop with a 10% ABV and costs $7 but I’m sure it can be found for less in Arizona. The cans I have were packaged on July 19th and the beer was reviewed on September 18th.

It poured a nice and hazy burnt orange color with very minimal head building up. The bright white foam never made it more than half a finger high and was quickly nothing more than a razor thin ring around the edge of the glass and almost no lacing.

But, holy cow, did it smell amazing!

Somehow, despite it being a Triple IPA and having a double-digit ABV, it was incredibly juicy and inviting. There were massive notes of mango, papaya, passion fruit, and pineapple and you could literally smell this beer from five feet away. There was no hint of booze or hoppy bitterness in the aroma and, based on the smell alone, I would’ve guessed it was just a 6% hazy IPA. I couldn’t wait to dive in.

And my first sip did not disappoint. It started off with a moderate flash of carbonation and a small hint of hoppy bitterness but quickly had me smiling.

A wave of tropical fruits washed across my taste buds unleashing a blend of super juicy tropical fruits; mango, papaya, pineapple, peach, and some light honeydew melon leading the way.

The first wave of fruit was met with a pithy grapefruit rind flavor midway through that brought back some of the hoppy bite but still managed to keep the bitterness to a very low level.

As the sip progressed, that grapefruit peel addition began to slowly overpower the other citrus fruits and teamed up with some light earthy and grassy undertones and began to cut into the early sweetness.

It finished a little dry and with some of that resiny grapefruit bitterness lingering on for a few moments.

Overall, this might have been one of the best Triple IPAs I’ve had in quite some time. It was so easy to drink and that massive ABV was never noticeable (although you sure felt it after the glass was empty). It was a super clean, insanely crushable 10% beer that drank much, much lighter.