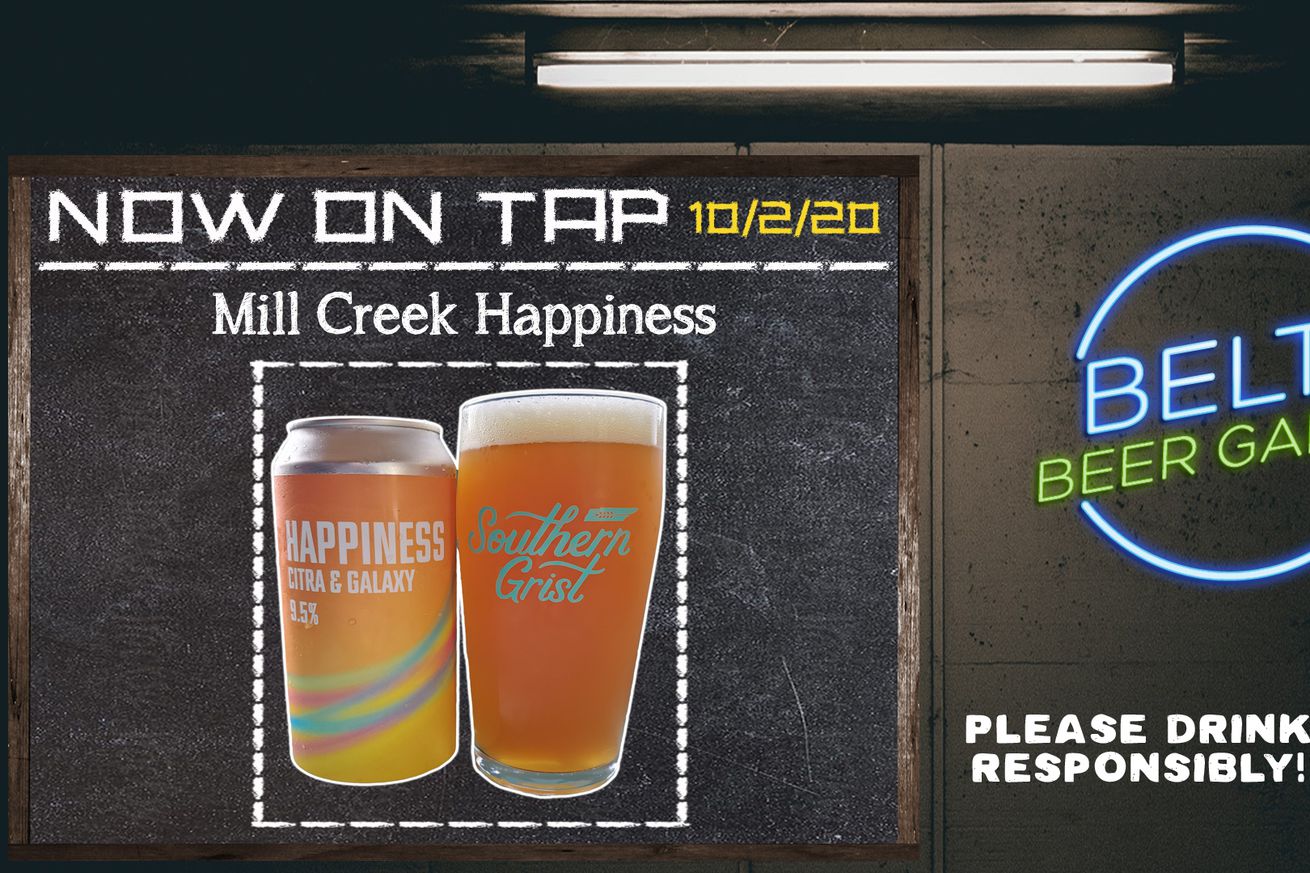 Mill Creek Brewing was founded on January 1st, 2014 Nolensville, Tennessee – a small town about 20 miles south of Nashville. They live by their motto of “Less Fuss. More Beer.” and I can’t think of a more fitting way to live life. Right now they have a solid distribution across Alabama, Kentucky, and Tennessee.

For my birthday a few weeks ago, my friend brought me back a beer from their Shield Series – a series of highly limited brews that go fast!

Happiness comes in many forms and, this week, for me, it comes in a can. Happiness is a 9.5% behemoth of an Imperial IPA that was double dry-hopped with Citra and Galaxy hops.

The beer poured a darker copper color, nearing an orange hue, with just about a finger of offwhite head topping it off. The foam quickly thins down to a mere ring around the edge of the glass with minimal lacing.

On the nose this was a very fruit forward brew. It was brimming with notes of tropical and stone fruits. Peach, mango, papaya, and passion fruit led the way but, underneath, you could smell the hops. There was a dankness and hint of bitterness that could be detected, along with other secondary characteristics of grass, resin, flaked grains, and a dash of booze.

My first sip started off incredibly smooth. The brew wasn’t nearly as thick as I thought it would be but it was still rather creamy. The hops nipped at my taste buds with some mild bitterness but it wasn’t severe and the flavors quickly overpowered the bitterness (for the most part).

The tropical fruits gave off a nice sweetness as peach, mango, and papaya appeared alongside a slightly tart lemon flavor that I didn’t see coming.

Those citrus fruits had full control of the first half of the sip. But, around the midway point, the hop profile shifted some – adding earthy pine notes and that grassy, resinous feeling as it continued.

The bitterness was also amplified in the second half, cutting through the fruit. The malt profile used some biscuity notes and caramel to attempt to quell it but it was no match, and stung my tongue for a moment or two.

At nearly the same time, there was a boozy burn towards the back of my throat…the 9.5% showing itself here.

And then, just like that, the bitterness and alcohol disappeared. There was no lingering aftertaste, no dry feeling…nothing. The sip just ended. It was a super clean ending and I was ready to take another swig.

As I progress through the beer, the alcohol sting does die down with each additional sip and, by the end of the pint, it’s hardly even noticeable. It’s replaced with a pithy grapefruit that blends in well with the already prevalent hops.

Just like in real life, this can of Happiness is a lot of things. It’s juicy, bright, fun, and easy drinking. But you also have to go through moments of bitterness and some booze…and, even then, it can still be difficult to find (as this beer is a limited release).

If you can handle the high ABV and a slew of hops…this beer is for you.