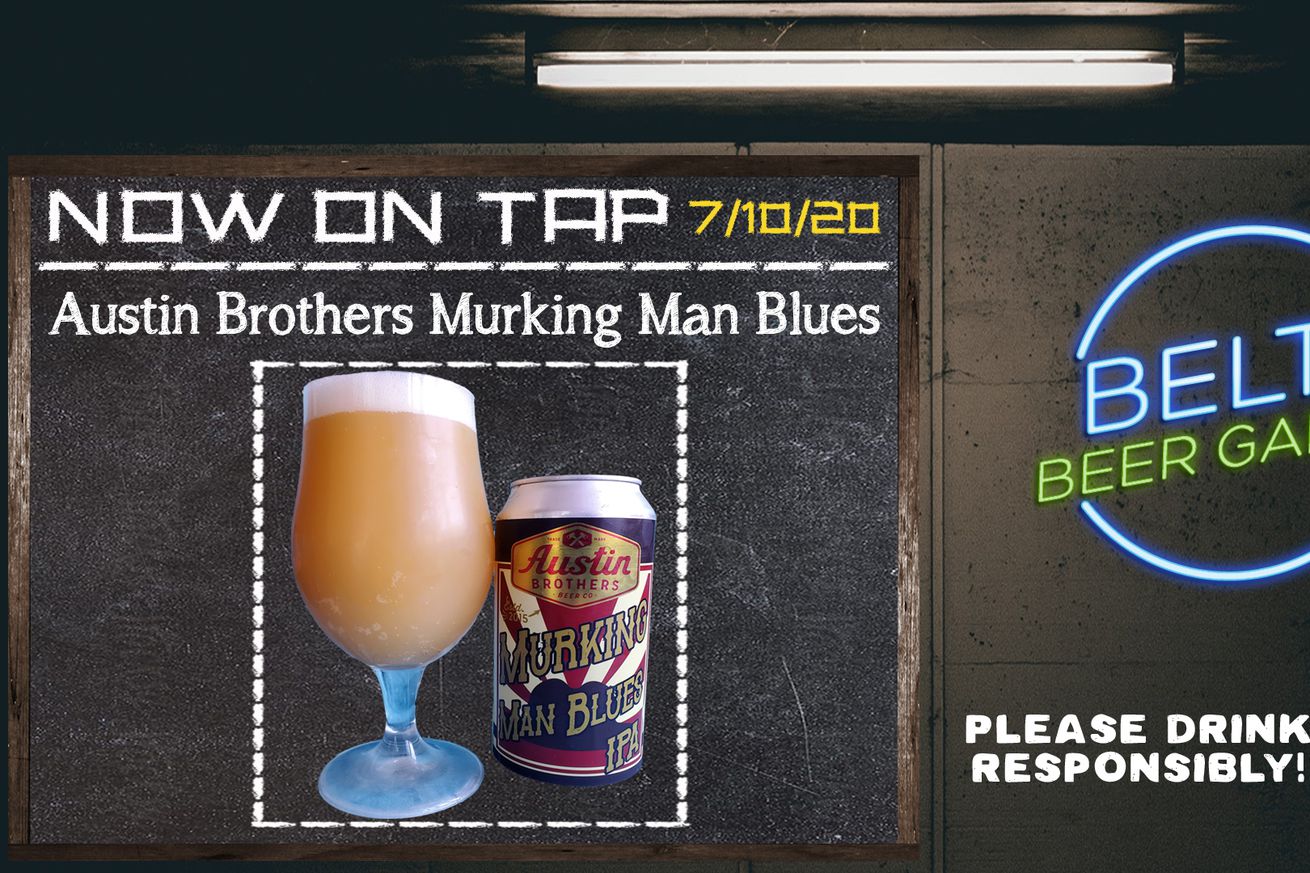 Today’s beer comes from Austin Brothers Beer Company and is perfect for working man to have this upcoming weekend.

Austin Brothers Beer Co. began in 2015 in Alpena, Michigan (near the top of the mitten on Thunder Bay in Lake Huron) after the owners found the city on a cross-country road trip and decided to move there.

Their distribution is still very limited and most of their beers are taproom only, with the occasional canned beer finding its way outside of Alpena.

Today I have a rarely released, and almost never canned, brew – their Murking Man Blues.

Despite the name taking inspiration from country legend Merle Haggard, this New England-style IPA was brewed with a trio of Australian and New Zealand hops – Motueka, Vic Secret, and Wai-iti. It packs a solid punch with a 7.2% ABV and each 16-ounce cans cost me $4.50. This beer was canned on June 2nd and reviewed on July 3rd.

It certainly lived up to the murky namesake, as it poured an incredibly cloudy/hazy muddled orange color with just about a finger of bright white head topping it off. The dense foam slowly faded down to a thin layer and laced the glass nicely as it did so.

The aroma was a combination of hoppy tropical fruits and floral notes with some flaked grain sweetness. A dash of pine and a slight hint of booze sat behind everything as well.

My first sip started with a thick and heavy mouthfeel and a slight hum of carbonation that gave way to that hoppy surge of tropical fruits.

It was pineapple and grapefruit that hit first with a dash of alcohol. Following those was a lighter melon and white grape flavor that peeked through but never overpowered the pineapple.

The grist appeared midway through with a bready, cereal-like flavor that was quickly overpowered by the hops.

Murking Man continued on with a juicy swelling of pineapple, melon, and pithy grapefruit. The burst of tropical flavors late in the sip slowly faded out, leaving just the grapefruit rind flavor lingering on afterwards.

It ended with that citrus peel flavor and a tiny bit of dryness sitting on my tongue for a few minutes after everything else had disappeared.

This was a rather heavy IPA and that made drinking it fast difficult. It was not a crushable, easy sipping brew but, rather, one that was meant to be sipped slowly and enjoyed over a longer period of time.

The brew didn’t initially seem like a NE IPA, as the first half wasn’t very juicy and was more average IPA than anything. However, as it warmed up, the juiciness increased and the bitterness faded some, making the final half of the can a much more enjoyable.

If I rated this beer based on the first half of my experience, it would have been a bit lower…

However, that second half was vastly different. Maybe I just got over zealous and dove in too quickly? Give this beer, and your taste buds, a moment to warm up. The second half really was better than the first.