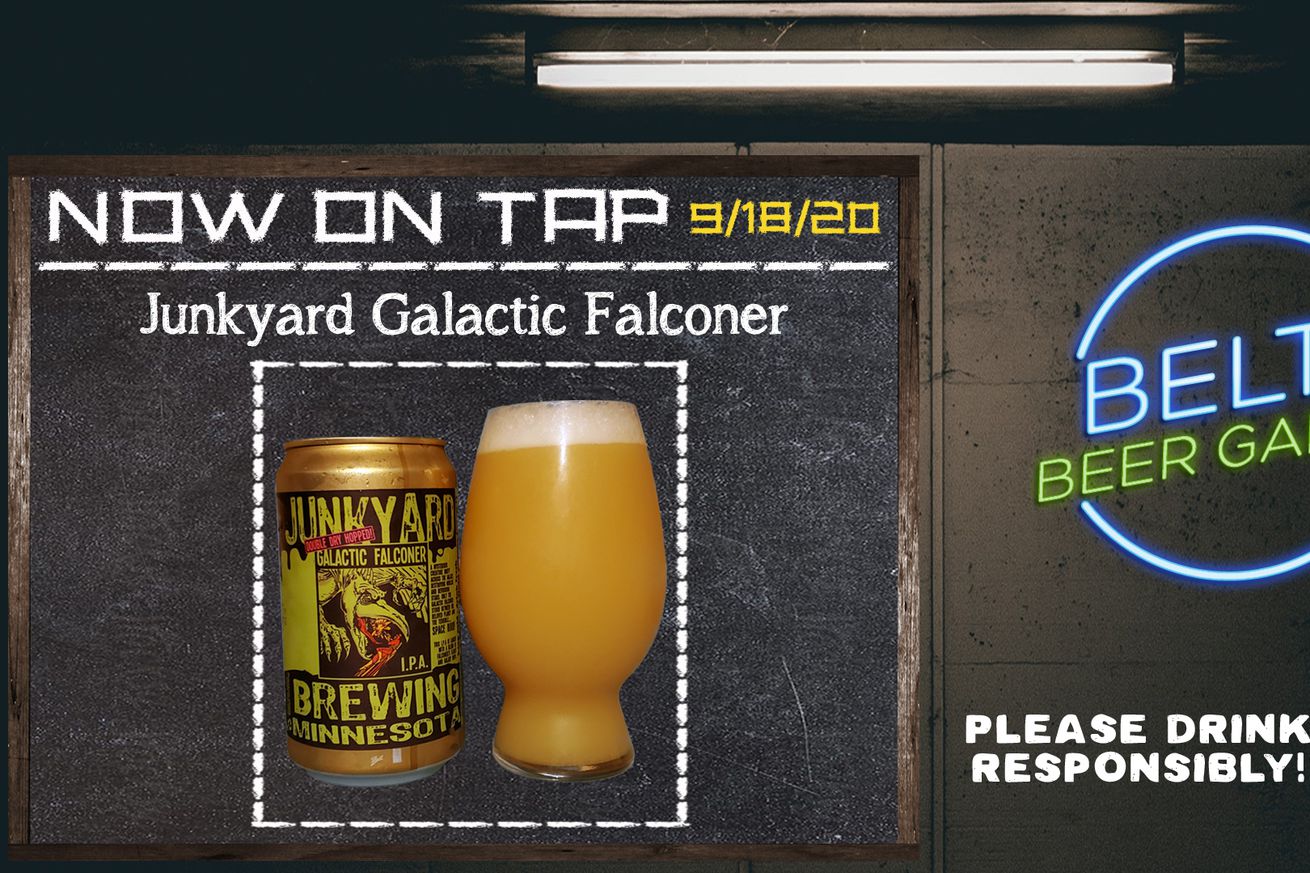 Junkyard Brewing opened their doors back in 2013 in Moorhead, Minnesota – which is right next to Fargo on the Minnesota/North Dakota border – so it should come as no surprise that their beers are only available at their taproom or in the Twin Cities, Fargo, and Bismark areas.

Galactic Falconer was brewed with a massive dose of Falconer’s Flight and Galaxy hops, with each jumbo sized can having a 6.5% ABV. My can was packaged on July 24th and reviewed on September 13th.

This double dry-hopped IPA poured an insanely murky and cloudy pale orange color. Almost like a delicious smelling puddle of muddy water. Just over a finger of eggshell white head topped the brew and slowly faded down to a manageable level.

On the nose, it was incredibly juicy and packed with hops. Tropical fruits like mango, papaya, and guava were most prevalent. Sitting patiently behind the juicy tropical fruits were notes of citrus rind, flaked grains (wheat and oats), and just a hint of an earthy/grassy hop resin.

My first sip started with a thick and creamy mouthfeel, very minimal carbonation, and it sat slightly heavier. The hop flavors crawl forward with the fruit flavors slowly popping up and, as the smell had indicated, it was filled with a slew of tropical fruits.

Sweet, ripe mango led the way and was quickly joined by some papaya. Following in their footsteps was a slightly acidic pineapple and some notes of guava and grapefruit.

There was a sugary candied lemon flavor that appeared midway through. It’s the flavor that always brings me back to my childhood and popping Lemonheads candy like it was nothing.

Growing more and more on the backend of the sip was a grassy resinous feeling that stuck to my taste buds and added some moderate dryness that lingered on after everything else had faded.

The bitterness level remained quite low and that made this massive can of beer insanely crushable.

Before I knew it, my glass was almost empty, as this brew went down soooo easily and so quickly. It’s a good thing it’s sold in 25.4 ounce cans because 16 ounces is definitely not enough! Heck, even the 750 mL isn’t enough!

My only complaint…I wish I had bought two or three because one is not enough!