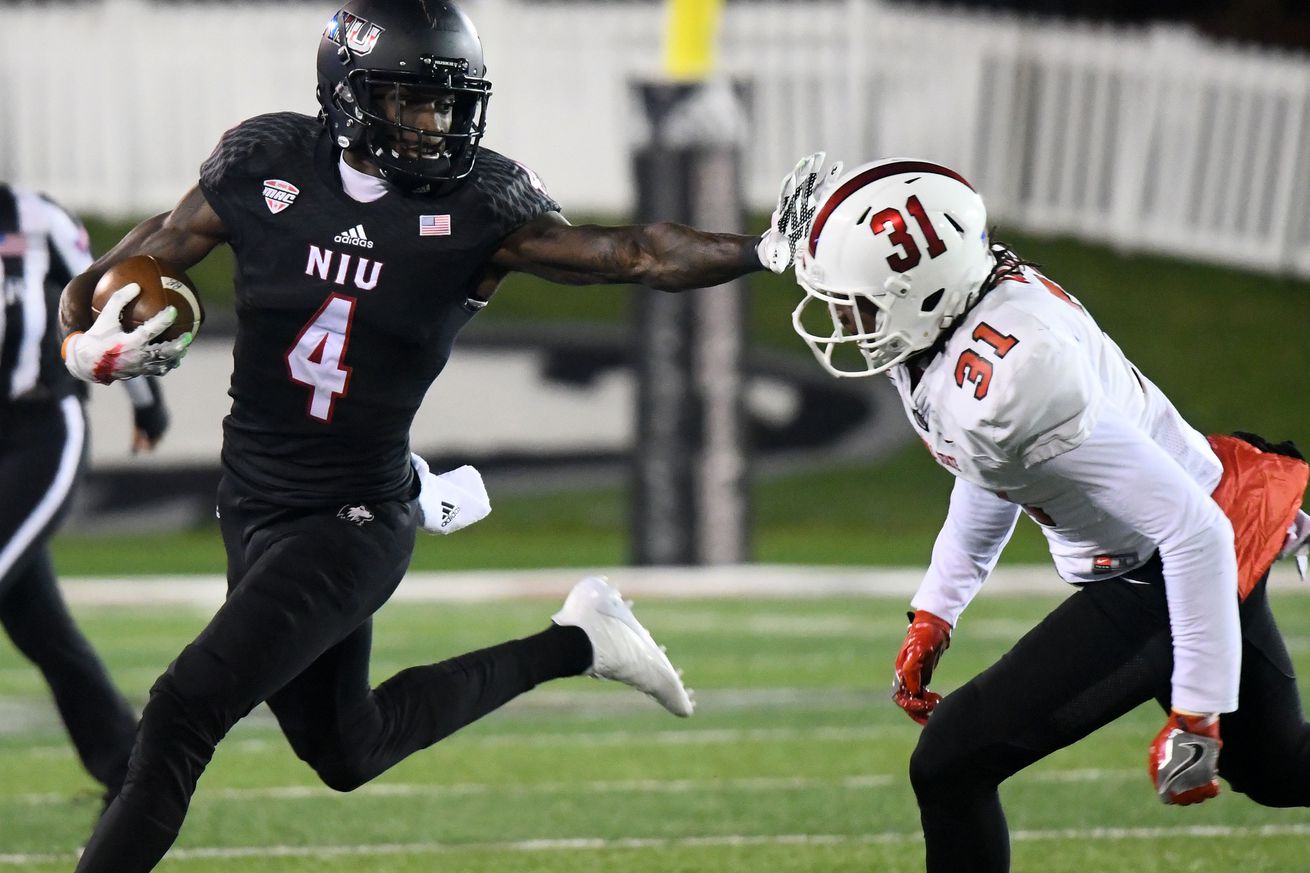 Who will win this year’s Battle For the Bronze Stalk?

The Northern Illinois Huskies (0-2) will travel to Muncie, Indiana to take on the Ball State Cardinals (1-1) on Wednesday night, where they’ll look to get their first victory of the season and reclaim the Bronze Stalk Trophy.

Last week the Huskies were annihilated by CMU while Ball State crawled back from a 21-7 deficit against EMU to claim a 38-31 victory.

When: Wednesday, November 18 at 7 p.m. (EST)
Where: Scheumann Stadium — Muncie, IN
Watch: ESPN News
Weather: Clear and in the low-40s at kickoff
Odds: Ball State is favored by 13.5 points and has a 69.6% chance of winning according to ESPN’s FPI

Battle for the Bronze Stalk History

Wednesday night’s game will be the 48th time these two schools have met, with the Huskies currently holding a slim 24-21-2 advantage over the Cardinals.

The first meeting was back in 1941 and ended in a 6-6 draw. The teams would meet again in 1942 (Ball State would win 14-0) but then not see each other for 24 years. However, the schools would then become real close, meeting every season from 1966 until 1988, with the exception of 1972. From there, a decade would pass before they rekindled the rivalry in 1997, when NIU rejoined the MAC. Since 1997 they have met every year.

The series has been full of streaks. The Huskies jumped out to an early 6-1-2 series lead in the first nine games. But the Cardinals would win 16 of the next 17 games to amass a 17-7-2 record against NIU. However, since 1999 NIU has reclaimed the series – going 17-4 and, at one point, claiming ten straight wins over Ball State (2009-2018) before BSU ended the streak last season.

It wasn’t until 2008 that a trophy was introduced. And, as a tribute to both universities’ rural locations, a stalk of corn became the inspiration for the trophy. Ball State won the inaugural trophy game but NIU has gone 10-1 since, only relinquishing it back to Ball State last year.

The home team has, statistically, been worse in the series. NIU is 13-8 in Muncie, while the Cardinals are 13-11-2 in DeKalb.

It has been a tough year so far for the Huskies, there’s no denying that. In both games the Huskies were able to keep it close initially before completely imploding in the second half…mostly on offense.

A struggling offensive line has led to four sacks, a lot of scrambling from QBs, and a mediocre run game.

Ross Bowers, NIU’s main quarterback, has connected on 55% of his passes (33/60) and thrown for 341 yards with a single touchdown and one interception. He has looked quite shaky this season and most of his throws have been within a second of the snap or high, either well over his receivers’ heads or forcing them to go up and get the ball, stopping any momentum they had.

Leading the way for the WRs is Tyrice Richie, who has 16 catches for 176 yards (nearly 43% of NIU’s receiving yards). Cole Tucker is another impact player, snagging seven passes for 82 yards and a touchdown.

NIU, who has been known as a running team for some time now, has also struggled to get anything going on the ground. Averaging just over 100 yards per game, Erin Collins leads the team with 92 yards on 31 carries (3 yards/run) and one TD. But right behind him is freshman Harrison Waylee, who has gained 89 yards on 23 attempts(3.9 yards/run).

The Huskie offense has turned the ball over seven times in two games (six lost fumbles and a pick), three of which went for touchdowns and one that ended up being a safety.

On defense, it hasn’t been much better for NIU. They’re allowing nearly 400 yards and 45 points per game. However, some of that has can be traced to the offense failing to move the ball or turning it over.

In both games the defense allowed quick opening drive touchdowns before settling down and keeping the Huskies close. NIU was in both games come halftime – it was 21-16 against Buffalo and 9-0 against CMU – before massive meltdowns in the final 30 minutes led to blowout wins for their opponents.

There has been virtually no pressure in the backfield from the Huskies, as they have just three sacks and only seven tackles for loss through two games.

Linebackers Kyle Pugh and Nick Rattin lead the defense with 16 tackles each. Pugh also has 1.5 TFL, 1.5 sacks, and a QB Hurry. Jordan Hansen, a freshman safety, has also played well. He has 11 tackles, half a sack, and an interception.

The Cardinals’ scorelines have been consistent so far; both games ended in the same score and under eerily similar circumstances.

In both games, the eventual loser had a 21-10 lead before allowing a comeback in the second half. Both games were tied 31-31 in the final minute and both had a game-winning touchdown in the final seconds – the RedHawks scored with 10 seconds to go to beat BSU 38-31. But, against EMU, the tables turned and Ball State scored a TD with six seconds remaining to win 38-31. Both on runs under 2 yards….very weird.

Drew Plitt has been very effective at quarterback for the Cardinals, slinging it for 541 yards and two touchdowns in the first two games on 41/63 passing (65.1%). He has thrown two picks as well and has been sacked NINE times already….which isn’t good.

He has three main targets – Antwan Davis, Yo’Heinz Tyler, and Justin Hall – the only Cardinal players with more than two receptions. Davis leads the team with 13 receptions and 179 yards but has yet to score. Hall is tied with Davis with 179 yards but also has a touchdown and just 11 receptions. Tyler is right there as well, as he has a dozen grabs going for 130 yards and a TD.

On the ground, watch out for Caleb Huntley. The senior running back is on pace for 1,000 yards, already running for 334 yards on just 55 carries (6.1 yards/run). He’s also scored five times. Justin Hall is also a threat to run – he has six carries for 87 yards and a rushing touchdown.

Defensively, Ball State is also led by two linebackers – Brandon Martin and Jaylin Thomas. Marin has 26 stops, a tackle for loss, and a pass breakup while Thomas has 20 tackles and a TFL.

But safety Brett Anderson and linebacker Jimmy Daw have also been all over the field, each having 15 tackles and Daw adding an additional 1.5 TFL.

Like the Huskies, Ball State has struggled to get pressure on defense, only netting three sacks and 12 TFL as a team. But, while they have yet to get an interception, the Cardinal defense does have nine pass breakups, six QB Hurries, and has forced three fumbles, recovering two.

Ball State should retain the Bronze Stalk Trophy here as the Huskies are in the midst of a rebuild (this would be the year to rebuild if there ever was a time).

The Cardinals offense can both run and pass the ball effectively, meaning the young Huskie defense is in for another long evening.

NIU is allowing nearly five yards per carry, so look for Huntley to have another explosive game. It wouldn’t shock me to see him around the 200-yard mark again, as he did it last week against EMU.

I would expect this would be another relatively close game in the first half before BSU starts to pull away in the second half. NIU just doesn’t have the depth and experience they’re used to.