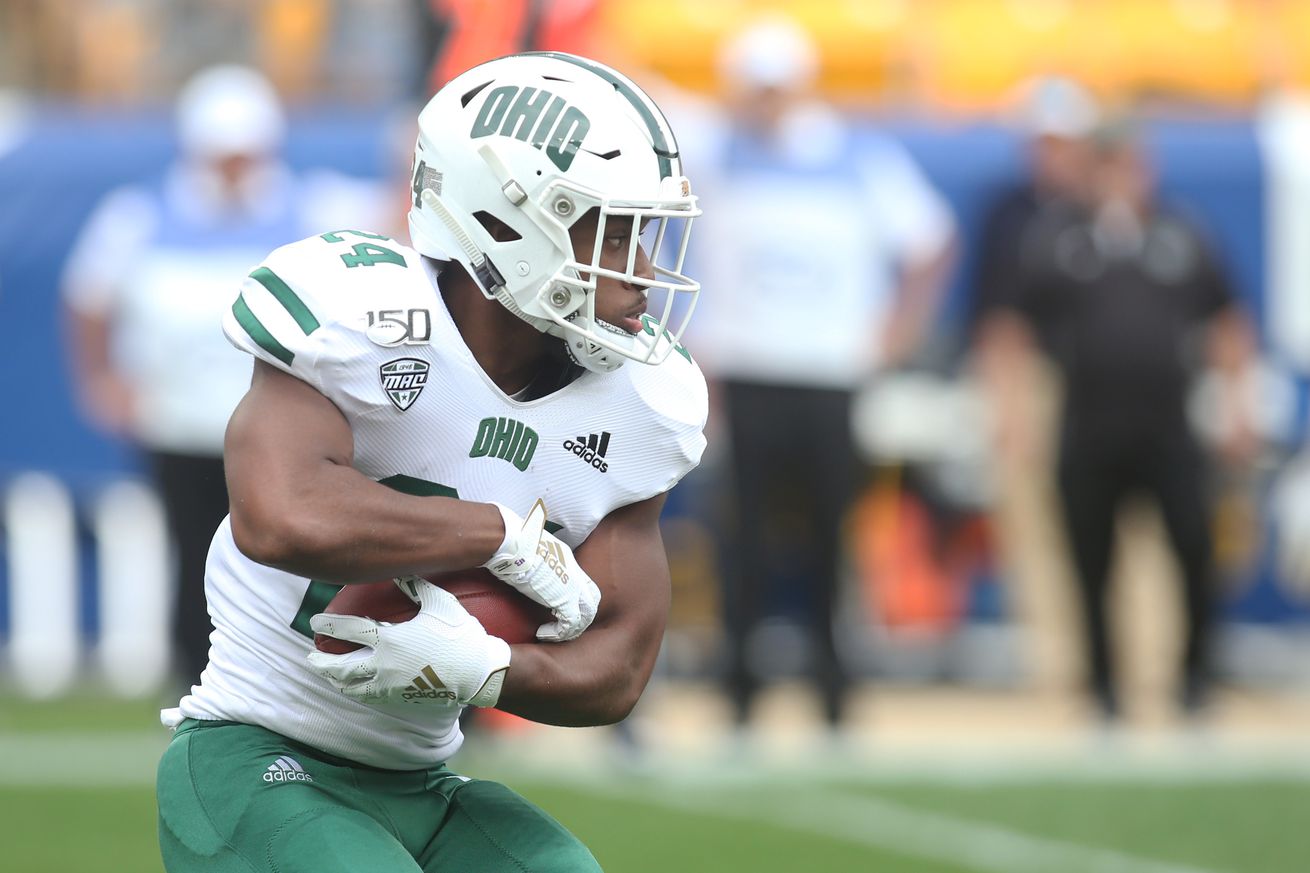 De’Montre Tuggle is quickly becoming one of the best backs in the MAC. Tuggle ran for 139 yards and two touchdowns in the win over Akron | Charles LeClaire-USA TODAY Sports

Takeaways from Ohio’s 24-10 win over the Akron Zips

Most, if not all, MAC coaches and players will tell you that they do not take any opponent for granted. That the goal is to go “1-0” every week.

The philosophy makes sense. Every MAC team is working hard to win and will come in ready to play. And there would be no real hopes of Ohio going to Detroit for the championship game this year with a loss to Akron at home.

With that said, it is probably hard for Ohio fans to feel like last week went anywhere near as well as they hoped. After all, Ohio was at home, 27.5-point favorites, and a MAC East contender going against an opponent who came in to Peden Stadium on the heels of a 58-13 loss and with an 18-game losing streak in tow.

So, for the Bobcats to be leading by only seven points with less than three minutes left in the fourth quarter was probably a lot closer of a game than Ohio fans expected to see.

Despite the close call against a spirted Akron squad, I think there is a lot to like about the 2020 Bobcats. And at 1-1 with some signs of improvement, I still think the team can make it to Detroit.

Entering the half way point of a six-game schedule, we take a look at each phase of the Bobcat squad for some key takeaways.

Through week two, all things considered, I think the defense has done pretty well. The Bobcats opened the season allowing 14 points in the first quarter to a quality Central Michigan squad but, since then, Ohio has allowed just 27 points in the last seven quarters.

Such a performance is pretty good considering COVID and other casualties have left Ohio’s defensive depth chart with a much different look than anticipated prior to the start of the season.

Coming into the season, Ohio figured to return multi-year starters at LB (Dylan Conner) and CB (Marlin Brooks). In addition, team captain DT Kai Caesar and key rotational player DT Marcus Coleman were anticipated to log heavy minutes. Veteran safety Alvin Floyd may have been in the mix for a starting role.

Yet, none of the above players have logged a single snap in 2020. Connor, Brooks, and possibly Coleman, opted out of the 2020 season. Connor’s replacement at LB was injured vs Akron, so the Bobcats are on their third-team linebacker.

The result is Ohio is a lot younger and more inexperienced than anticipated but are still competing pretty well. Against Akron, the defense held the Zips to just 10 points. And the Bobcats created two turnovers and both gave Ohio possession inside the red zone.

The pass defense did well overall, surrendering only a few big plays (25 and 39 yards). And the two key catches on Akron’s lone touchdown drive were on pretty good coverage by Ohio, just great plays by Akron.

The main issue against Akron was the off-tackle run defense. Ohio’s run defense looked pretty good between the tackles but where the Zips gashed them is on designed off-tackle runs or cut backs to the outside.

Overall, I would expect the defensive unit to continue to improve in 2020 with increased experience of the young but talented players and the anticipated return of Kai Caesar and Alvin Floyd at some point this season.

The offense really did not look to be in sync the majority of the night against Akron.

The Bobcats scored touchdowns on their first, fourth, and final drives but a series of penalties, execution errors, and bad luck scuttled other promising drives.

Reducing Execution and Other Errors

If the Bobcats offense can execute more consistently and reduce penalties, they can be very good.

The Bobcats have a core group of really talented players on offense, just about as good as anywhere in the MAC. WR Isiah Cox just makes big play after big play. His catch against Akron in the second quarter to set up a touchdown is just about as good as it gets (see the video here, at about the 2:40 mark).

RB De’Montre Tuggle is a special talent and has 380 combined yards (rushing, receiving, kickoff returns) and 4 scores in 2020. And talk about clutch, Tuggle carried the ball nine straight plays at the end of the fourth quarter on a 70-yard touchdown drive to put the game away.

WR Shane Hooks is one of the better deep ball threats in the MAC. Hooks caught four passes vs Akron for an 18.3-yard average. TEs Adam and Ryan Luehrman are reliable targets and good blockers.

It was just a lot of things with execution and penalties that limited Ohio’s effectiveness vs Akron. On the second drive of the game, a holding penalty inside Akron’s 30-yard line on a run on 2nd and 1 stalled the drive. In the red zone on 3rd and 5, an out route is run just short of the first down marker and the throw is a little off, forcing the WR back to the ball, creating a fourth and 1. The QB does not see a RB wide open in the flats for what would have been a big gain. A throw here-and-there to an open receiver which is off the mark or dropped.

With the core group of talented players and the new QBs gaining experience, I see Ohio eliminating mistakes and improving on offense.

Something to keep an eye on is if the offensive line is able to identify its most effective group going forward. Ohio played nine offensive linemen vs Akron, still seeming to be searching for the right combination.

The Bobcats have lost the battle in time of possession on an average of about ten minutes per game in the first two games. Head coach Frank Solich identified this as a priority improvement area in a recent press conference: “getting more snaps offensively is something that has to transpire and that involves the whole football team, offense, defense, and special teams, it involves getting some three-and-outs (on defense) and it involves converting on third downs on offense.”

The Bobcats were 2-of-10 on third-down conversions vs Akron.

Overall, the special teams have performed pretty well and even improved in some areas in week two vs Akron.

As a general rule, Ohio puts a premium on maintaining field position advantage, regularly opting to punt even when the offense is on the opponent’s side of the field. Punter Jack Wilson, in his second game as a Bobcat, did a nice job of maintaining field position, pinning Akron back inside its 20 yard line three times. And Wilson’s overall performance looked improved, avoiding any misses like the 22-yard punt vs CMU.

Coverage teams are doing well. Kickoffs seem to be well-placed and the coverage units have not given up any explosive plays, with the longest return allowed being a 24-yard kickoff return by Akron’s Jeremiah Knight.

The obvious area of improvement needs to come from the field goal unit, where Ohio is 1-of-4 on field goal attempts, including two misses inside 30 yards. There is optimism that this will turn around as Ohio’s kicker is only a redshirt freshman with two career starts.

If Ohio can start hitting some more of its field goals, the special teams unit will be a big plus going forward in 2020.

Ohio travels to Yager Stadium in Oxford, Ohio on Tuesday November 17th to take on rival Miami in primetime. The game will be broadcast on ESPN starting at 8pm Eastern. Hustle Belt will get you ready for the contest with a game preview in the days leading up to kickoff.