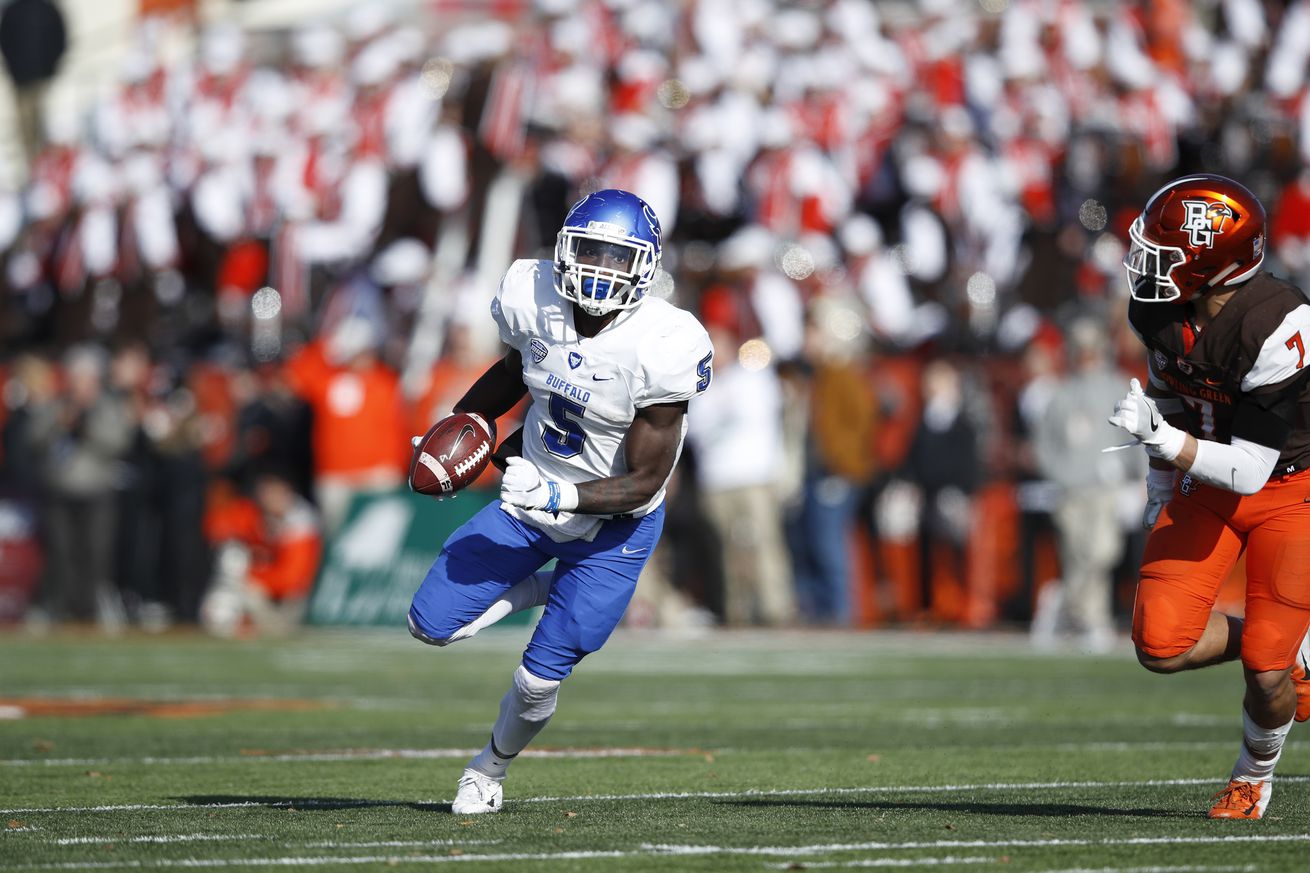 Buffalo made a statement last week by throttling the defending MAC champs. Bowling Green hopes to end its drought with a longshot upset bid.

It’s possibly the most lopsided matchup we’ll see in the MAC all season. Buffalo just wrecked Miami (OH) by 32 points while Bowling Green is losing games this year by an average of 36.5 points. The 2-0 Bulls are even better than the 2019 edition of the team which finished with the MAC’s best record at 8-5. The jury is still out on where Bowling Green stands in relation to previous years, but the Falcons’ outlook for 2020 currently appears bleak after a suffering back-to-back blowout losses out of the gate.

Buffalo is the clear frontrunner of the Mid-American Conference. The Bulls deservedly earned that recognition after annihilating the reigning MAC champion one week ago, 42-10. In what was expected to be a hard-fought battle and the conference’s game of the year, Buffalo made things look incredibly simple.

The Bulls always present a challenging running threat with the 1,000-yard halfback duo of Jaret Patterson and Kevin Marks, but the offense has evolved beyond the running game year. Buffalo can destroy opponents through the air now.

Quarterback Kyle Vantrease enjoyed a career day against the RedHawks racking up 353 passing yards and four touchdowns — finishing 9/9 with 229 yards and three touchdowns in the second half alone. His downfield passing looks considerably sharper this year, and he connected on seam route touchdown passes of 78 and 82 yards a week ago with pinpoint accuracy.

Buffalo didn’t require Vantrease to pass much last season, but the Bulls are balancing their run/pass split more this year with the quarterback vastly improving his game. The receiving group is much deeper as well, improving the versatility of the unit. In 2019, the entire passing game centered on wide receiver Antonio Nunn, who is playing the best football of his Buffalo career. Nunn is continuing to manhandle opponents on contested catches and in the open field with sheer strength, and he’s elevated his game too. He is second in receiving yards in the MAC with 239 and has contributed two touchdowns on 11 receptions this year — one on a seam route and the other on a 50-50 jump ball in the end zone.

Nunn now has additional weapons lined up beside him. Tight end Zac Lefebvre has been a remarkable downfield threat with 109 yards, averaging 18 per reception. Wide receivers Trevor Wilson and Jovany Ruiz each contributed a touchdown a week ago and defenses now have to focus on more wideouts other than Nunn. With a loaded receiving corps, Vantrease is able to spread the wealth and foster versatility within the Buffalo offense.

Patterson and Marks will carve out their work in the running game and whichever running back catches fire Tuesday night likely surpasses the 100-yard mark. Destroying the Falcons in the run game shouldn’t be too difficult considering they have the only rushing defense in the country that allows over 300 yards per game. For a quick refresher of what Patterson did to Bowling Green last November, he shattered MAC records with 298 rushing yards and six touchdowns on a defense which had absolutely zero answers.

Through two games this season, Patterson became the program’s all-time rushing touchdown leader and the fastest running back to 3,000 yards. Patterson’s accolade hunting isn’t finished yet. With 154 more yards, he could pass James Starks to become the second leading rusher in Buffalo history. Meanwhile, Marks is fresh off a 100-yard performance and needs 192 more to secure a spot as the fifth leading rusher in the Bulls’ record book.

Defensively, Buffalo is as potent as any team in the MAC. Against Northern Illinois two weeks ago, the Bulls scored three defensive touchdowns and forced five turnovers. Facing Miami (OH), Buffalo was even more unstoppable. Usually, the success starts with the front seven but last Tuesday night, the secondary blanketed the RedHawks and produced six pass breakups. Miami quarterback A.J. Mayer completed only 7/25 passes and cornerback Roy Baker picked him off in man coverage on a momentum-swinging play. Overall, the RedHawks managed to score a mere 10 points on the defense.

Bowling Green may recall Buffalo’s stingy secondary. Last November, the Falcons totaled just 81 passing yards in the 49-7 loss to the Bulls. Moving the sticks on the ground was a challenge for Bowling Green as well, finishing that game with 106 rushing yards at 3.0 yards per carry.

Scot Loeffler has a grueling rebuilding project on his hands. Bowling Green has not won any of its last five games dating back to November 2019, and frankly, the Falcons weren’t even close. After a 62-24 loss to Kent State last Tuesday, they are the first FBS team over the last 15 seasons to lose five consecutive conference games by 35 or more points.

Bowling Green has been outscored by an aggregate score of 97-27 this season, but the competition has been strong. It won’t get any easier this week facing an improved Buffalo offense averaging 45.5 points per game this season with victory margins of 19 and 32.

The forefront of Bowling Green’s issues stem from the defense, and the defense has been consistently among the worst in the country since Dino Babers left in 2015. Through a small sample size of two games, the Falcons are the only team in the country to allow 50 points per game. But this is a familiar position for a program which has finished in the bottom 11 in points allowed per game in each of the last four seasons.

Outside of the defense, the Falcons’ passing game has been a massive letdown. Boston College transfer quarterback Matt McDonald has yet to complete more than 30 percent of his passes in a game this year, connecting on just 14 of 50 attempts (28 percent). The number will certainly improve as the season gains steam, but no FBS team is even within 14 percentage points of that unsettling rate. Buffalo holds opponents to an average of a 45.8 completion percentage (third in FBS), so the trends could coincide poorly if McDonald faces pressure and continues to force low percentage throws.

McDonald has demonstrated a solid rushing ability, however. He dazzled Toledo with 41 rushing yards on three attempts in the opener, but sack yardage forced him to finish with -10 last week. Still, McDonald came in handy near the goal line in the first half as he scrambled to the outside for a touchdown which tied the score at 10 apiece — right before Kent State fully took control.

While the offense has yet to arrive, Bowling Green undeniably exhibits talent at the skill positions. Tight end Quintin Morris was one of the country’s top tight ends a year ago, ranking seventh in his position in receiving yards with 649. This season, with the Falcons struggling to complete passes, Morris has been limited to four receptions and 37 yards through two games.

There are no complaints in the running game after last Tuesday night. Despite starting running back Andrew Clair missing the Kent State game due to a shoulder injury, a new star emerged at the end of the contest. Freshman Terion Stewart checked into his first collegiate game and turned on the burners for 162 rushing yards and two touchdowns on 14 carries. Although the game was decidedly over when Stewart generated his impressive stats, his performance should earn him more reps on an offense looking for any jump-start it can get.

If Clair returns from injury (he was listed as questionable last week), that could be a bonus too. He rushed for 37 yards at Toledo, and the redshirt junior is still aiming to recapture the success of his 2017 true freshman campaign. The long tenured Buffalo players and personnel may remember 2017 Clair, as he registered 85 rushing yards and a touchdown in a 38-28 loss to the Bulls.

It’s a longshot chance to win this game, but here’s a reminder about Bowling Green. The Falcons pulled off an upset as four touchdown underdogs last October. Battling a 4-1 Toledo team which looked like the MAC frontrunner at the moment, Bowling Green protected its home turf and shut down the Rockets’ offense for a 20-7 victory. This time the Vegas spread is slightly larger, but similar, and the venue remains the same for the upset-hopeful Falcons.

This one will be over by the first quarter. If Buffalo wants Jaret Patterson and Kevin Marks to keep rewriting the record books, both running backs should have no problem doing so. Buffalo’s offensive line hasn’t allowed a sack in six games and it should be able to withstand Bowling Green’s pass rush to give Kyle Vantrease ample time to carve out the Falcons’ defense. But Buffalo probably won’t pass much if the score gets out of hand in the first half.

Things are shaping up for a blowout, which would result in Bowling Green’s sixth consecutive loss. But it will be improvement if the Falcons lose by less than 35, ending the dreaded streak of futility. Buffalo, which was recognized with an AP vote after its win over Miami, may be too good to allow that.