After an injury-plagued start to 2019 led to four losses in Syracuse’s first five conference games, the Orange recovered with a five-game winning streak in late October and early November. They finished the season eighth of 15 teams in the Atlantic Coast Conference.

Polina Shemanova was the driving force during the Orange’s best spell of the season, which included five-set wins over Boston College and Louisville. Shemanova led the ACC in points, points per set, kills and kills per set. Then a sophomore, she was named ACC player of the week for three consecutive weeks. But for the Orange’s season, that wasn’t enough.

After making it to the NCAA tournament in 2018 for the first time in program history, Syracuse (12-13, 9-9 ACC) turned in a middling season plagued by injuries and inexperience. The Orange couldn’t seem to overcome early season woes, and their season turned into an unexpected “developmental year,” outside hitter Kendra Lukacs said.

This year, due to the ACC’s coronavirus schedule adjustments, SU is set to play a shortened season with 10 conference games. With 11 of the Orange’s 13 players returning this fall, here’s a complete breakdown of the 2020 roster and what to expect from Syracuse.

In 2019, the Orange’s roster was young — nearly half the roster spots were filled by freshmen, and Aliah Bowllan was the only senior regularly in the starting lineup. Now, with the Orange returning five of their six regular starters, expectations should be higher.

Sophomore Marina Markova, who suffered a season-ending finger injury in mid-October, finished the year with the second-most aces per set in the ACC (0.46). Early in the season, she led SU in service aces and had the eighth most in the country. The outside hitter also found success at middle blocker during SU’s spell of blocking struggles.

Alongside Markova will likely be middle blocker Abby Casiano, who recorded nine blocks and five kills in the Orange’s 3-2 win over Boston College. Head coach Leonid Yelin utilized various combinations of Markova, Casiano, Yuliia Yastrub and Dana Gardner as middle blockers last season — and all four will be back in 2020.

Setter Elena Karakasi recorded 804 assists last season, and barring a few mishaps in her first season as a starter, she was perhaps the Orange’s most consistent player. As the season went on, Karakasi developed more on-court chemistry with outside hitters Ella Saada — who had the second most kills on the team — and most importantly, her roommate Shemanova. Shemanova attributes much of her success to her setter, and this season, the two should pick up with the same rhythm they left off with the end of 2019.

Now a junior, Shemanova is coming off a 2019 season where she finished fifth in the nation for points per set and broke the Syracuse record for most kills in a single game (36) against Louisville on Nov. 3. Though she lacked consistency early on during the season, she made up for it in the latter half and the expectation is that she’ll only get better, Lukacs said last year. 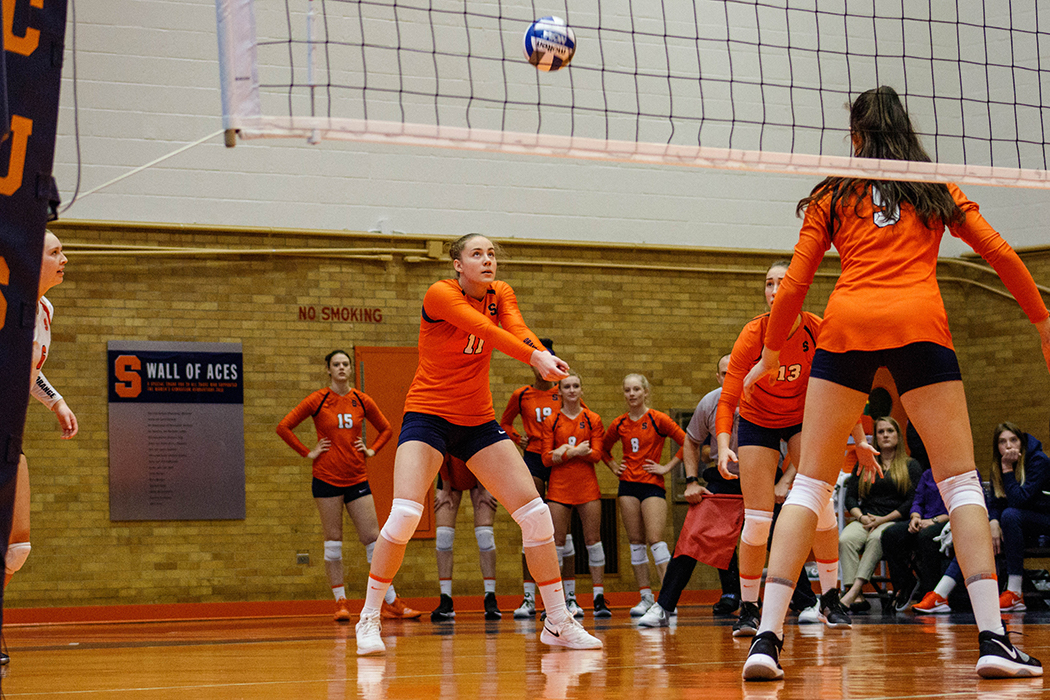 The Orange lost libero Bowllan and Lukacs to graduation, but will return the remaining 11 players from last season.

Replacing the difficult digs that Bowllan made look routine will not be easy. She had 240 digs last season and averaged a team-high four per set, and served as “the leader of the defense,” assistant coach Derryk Williams said.

Sophomore Berkley Hayes is Bowllan’s expected replacement, but in comparison to her fellow sophomores, Hayes rarely saw the court in 2019 — she had 27 digs in 61 sets last year. Hayes has big shoes to fill, though she was relatively consistent during her limited playing time as a freshman.

When Bowllan missed nearly a month due to a right ankle injury, Lukacs filled in. Though she was only used sporadically throughout the season, she played a large role as a “senior leader” on the team, Williams said. This season, the Orange will turn to seniors Saada, Gardner and Yastrub, to fill those vacated leadership roles.

With the offensive abilities of Shemanova, Markova, Saada and an emerging Casiano, paired with the growing chemistry the four have developed with Karakasi, SU will be a serious offensive threat.

The Orange already have a superstar in Shemanova, and so long as she continues to show up in the game’s most clutch moments, the Orange will continue to impress offensively. When she gets into a rhythm, Shemanova is able to notch kills through as many as three blockers.

“(You) cannot have five drivers in one car. You know what’s going to happen, and (our team is) not an exception for this,” Yelin said in 2019. “Shemanova is one who can make a difference and has to step up to the challenge that we have.”

Though there isn’t an NCAA tournament this fall, the Orange can be a very dangerous side, if they show up defensively. Following the unexpected rebuild in 2019 and barring another injury plagued season, Syracuse’s more experienced 2020 team should outperform last year’s.