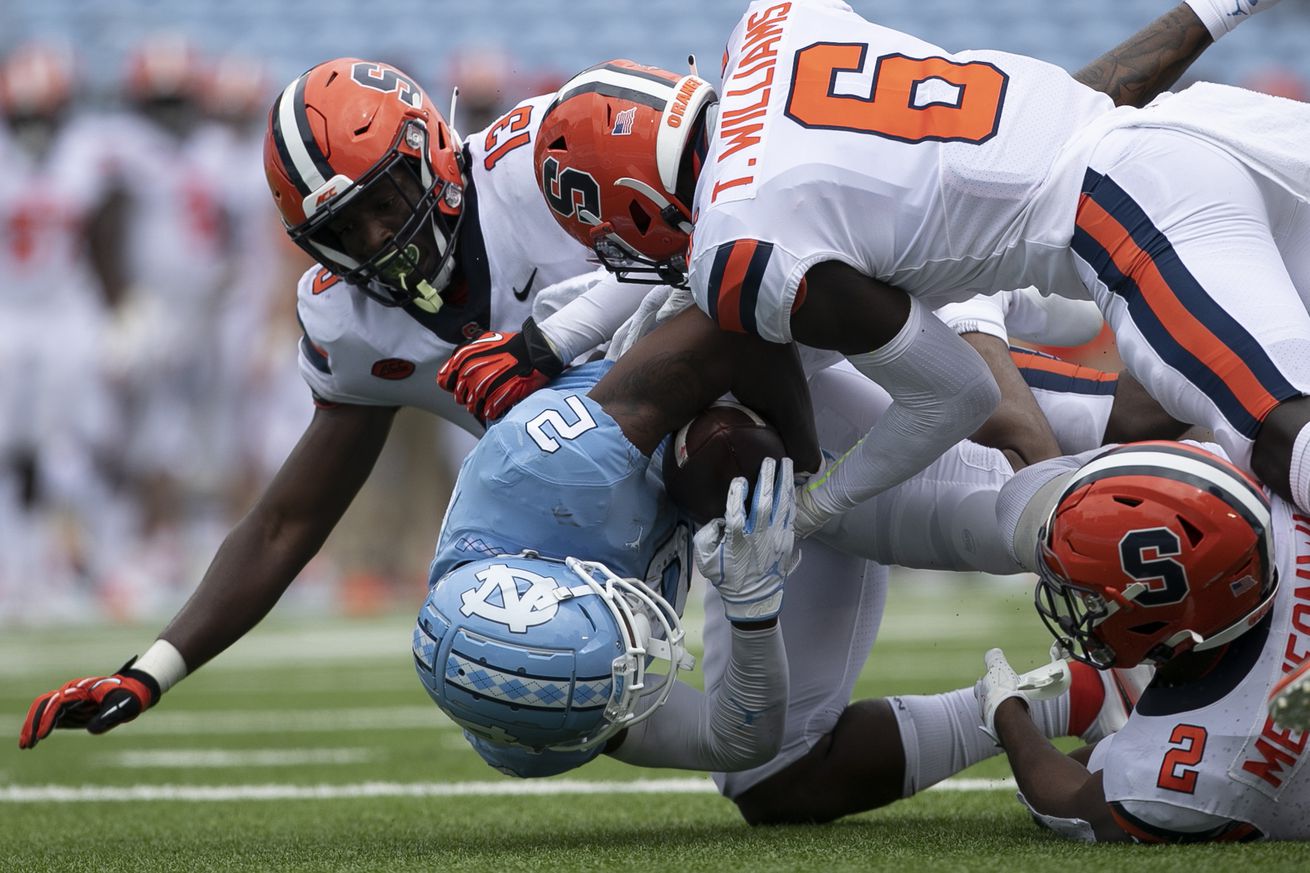 Questions abound after game one

Following the Syracuse Orange’s 31-6 loss to North Carolina on Saturday, Dino Babers addressed some of the frustrating results:

“It comes down to when you have an opportunity, you have to make plays.”

Despite what wound up being a 25-point loss to the 18th-ranked team in the country, Syracuse did do some positive things here and there. And they DID have plenty of opportunities to win this game. Or at least keep it closer than the final score.

There was the punt return touchdown called back for an ill-advised personal foul. The failure to convert three turnovers into any real points, and scoring on just two of three red zone trips (both field goals). Sharod Johnson’s dropped touchdown pass. Andre Szmyt’s missed field goal. The team was within seven points or less of UNC for 45 minutes of game time. All opportunities. All missed.

More than anything else, I’d content that litany of missed chances is what had Orange fans so irate in the aftermath of the game. If you just lose to a ranked team for the whole game, it’s almost easier to stomach. They were better, you weren’t, you live to fight another day.

But being taunted as Syracuse was for over three quarters on Saturday means you missed a chance at a win. That sort of loss is worse, and also leads to a lot more second-guessing. If you just did X better, or X, Y and Z more effectively, perhaps you’ve won the game instead.

Where it gets even more maddening for the Orange here comes from the fact that last year was already one of missed opportunities. Seeing a game full of them in week one tells fans — self included — that 2020 could be another entire season of them, in part because the offense (Dino Babers’s specialty) just doesn’t appear up to snuff.

So will this be a season of opportunities? Or one where SU actually follows through on the chances presented to them.

We’ve seen both scenarios these past couple seasons. The 2018 campaign was clearly one where SU was presented with the opportunity of a down ACC and an experienced senior class (and QB), and followed through to turn that into a special year. Last year, Babers’s program had an opportunity to prove that wasn’t a fluke, and due to a variety of reasons large and small, did not.

In year five of the Babers regime, this sort of becomes the rubber match. We know that with this staff, Syracuse can follow through. We also know they can miss on opportunities presented to them based on what we saw last season — one that featured a couple close losses which had any turned into wins, SU would’ve made a bowl game.

For restless fans, 2020 allows them to establish which scenario is the exception and which is the rule. Or at least it would, if not for a pandemic, drastically harder schedule and various injuries already by this point. The altered season and stunted offseason are what complicate matters.

If Syracuse was unable to follow through on opportunities in a normal 2020 season and missed a bowl against their original schedule, it’s perfectly understandable — and reasonable — to demand some answers. This wouldn’t have been a “hot seat” season for Dino, but failing to make a bowl would’ve potentially set one up next year, and Babers would’ve had to perform against “bowl game or bust” expectations.

Without a normal offseason to implement the changes Babers put in place or a normal season to test them against, the question becomes harder. How can one truly evaluate a coach when despite everything he did to prevent a tough season, he may very well get it due to forces beyond his (or anyone’s) control?

Still, it’s the nature of college football, and fandom in general, to expect more. So Dino and every coach in the country is forced into a similar predicament. Is this a developmental season that doesn’t matter much? And if they think it is, do fans? Because based on how aggravated a lot of Syracuse fans appeared during and after Saturday’s loss, I don’t think many are willing to wait.

I’d argue they should be willing, but you knew that already. Coaxing the Orange to 10-3 in today’s college football landscape is a miracle, and any coach that does it deserves a little runway. However, that was the opportunity Dino had when he got here. He nailed it. But the follow-through thereafter is what tripped him up last year, and may very well this year too.

The 2020 season can still be one of follow-through . We’re just going to need to start seeing signs of it next week against Pitt. If you’re on the optimistic side, you see three quarters of “what if” and playing close vs. UNC as a sign of possible improvement to come. Those that are already pretty sour on this regime (I personally that’s ridiculous, but sure, we’ll certainly acknowledge the overall shortcomings) may see the beginning of the end. A second straight season of opportunities, without enough follow-through to warrant this journey continuing with Babers at the helm.

Whether this is a “developmental season” or not, it’ll still be decided by fans feeling like they saw follow-through or just opportunities at the end. Luckily, we still have 10 more games to come to those conclusions. Or at least, I hope the majority of fans are willing to wait more than one game before making their decisions on what this season truly is for SU.