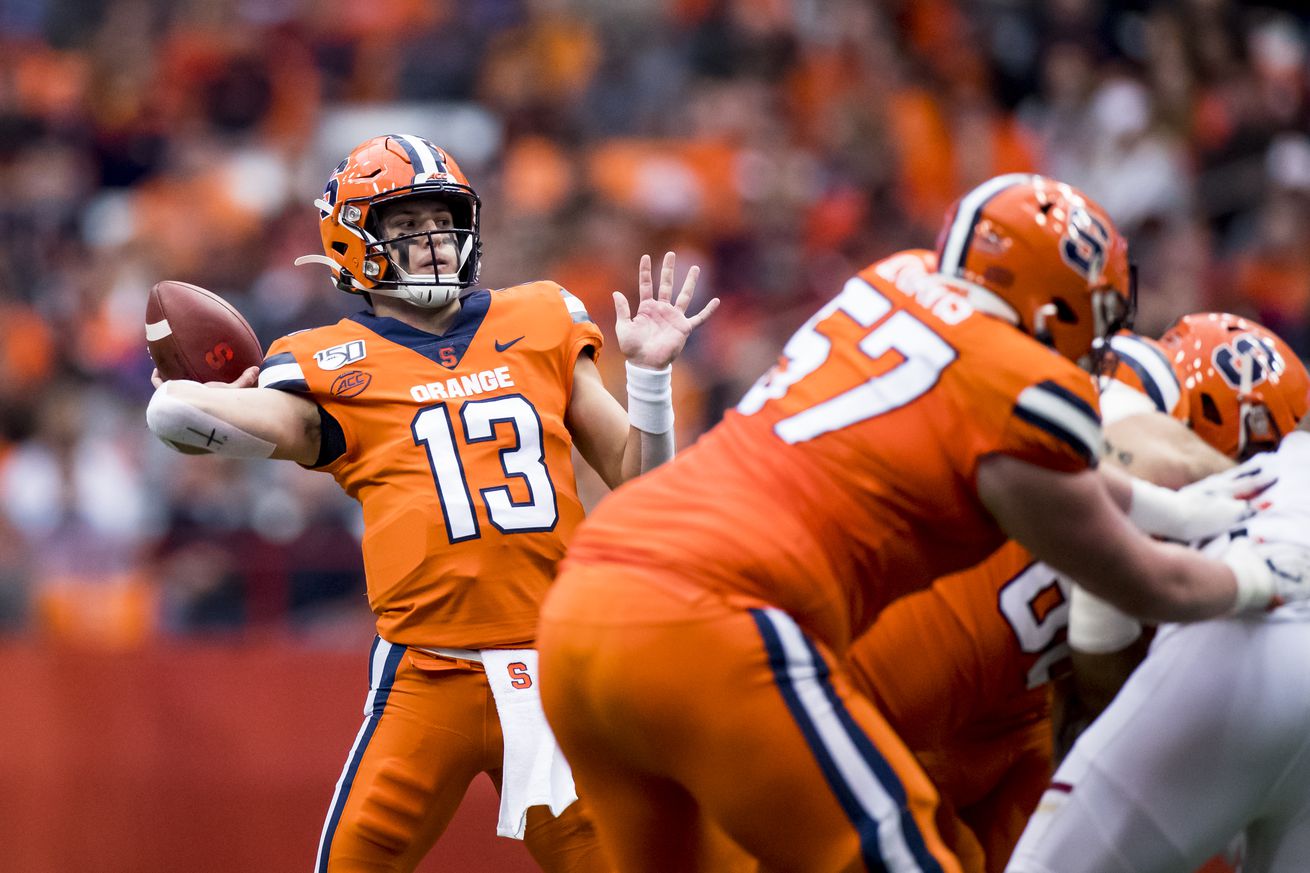 Ed. Note — As has become an annual tradition at TNIAAM, staff writers tell you all week why this year’s Syracuse football team will finish with certain win-loss records. These projections get better as we go along, so hopefully you were done being mad around now, or Thursday.

So for all you avocado toast-loving millennials with your TikToks and your participation trophies and your socialisms and your curious distaste for Confederate statues, I’m the face who used to run the place. I hope this blog post finds you well.

I’m gonna level with you guys. I haven’t really been paying attention to what’s going on with Syracuse Orange football. I mean, I’ve been paying attention in the general sense that we’re all paying attention to college athletics and the game of chicken we’re all playing with the lives of 20-year-olds just so we can watch Syracuse play Pitt in a Nooner on Channel 397. But, like, I honestly couldn’t tell you that I have any insight into how good this team is, how good the other teams are, and what the hell is going to happen this season (if it actually happens at all). I don’t think I could even tell you who the starting linebackers are. So I’m just gonna talk about whatever I want to talk about and you’re just gonna have to deal with that.

With that being said, all glory to god and the haters, let’s figure out how this team is going to go 7-4 and go to The Duke’s Mayo Bowl as intended. Please respect my decisions. No phone calls, please.

at North Carolina Tar Heels: You know what’s really gotten me through the quarantine? Horror. As in, the genre. I’ve been a big horror fan for a long time but for some reason I found myself turning to horror content in just about every medium when given any kind of choice. I was concerned that I might need to book some therapy appointments but during an episode of the podcast Scaredy Cats, an expert talked about how a lot of people turn to horror in times like this because when you’re watching a horror movie or reading a horror novel, you can tell yourself “well at least my life isn’t as bad as THIS.” And then it made a lot of sense.

My top pandemic horror picks? The aforementioned Scaredy Cats podcast was fun, and The Left-Right Game was a downright fantastically creepy audio drama. I ended up binging the “Kill Count” videos on the Dead Meat YouTube channel as a way to remember some horror classics. I got a subscription to Shudder, which is how I watched “Host,” which is way creepier than it has any right to be. I also powered through “Hannibal” on Netflix and cursed myself for taking it for granted when it was on the air. L, (0-1) (0-1)

at Pittsburgh Panthers: Has it really only been four years since the time Syracuse and Pitt broke the record for the most combined points scored in an FBS regulation game? It feels like eons ago, mostly because that game was just such a whirlwind of WTF. On paper, it was an insane watch to see one team score 61 points…and lose. But when you consider that it was Syracuse and Pitt, two teams who always bring out the dull in one another, it just seemingly defied logic. You couldn’t even be mad at Syracuse for losing, it was just too surreal to experience. It seemed at the time like it might be ushering in a new era of exciting Northeastern football. And true, the 44–37 overtime finish in 2018 provided some of that. But once you set the bar at 76-61, well, nothing else quite measures up. W, (1-1) (1-1)

Georgia Tech Yellow Jackets: I’m a big neck gaiter fan, is what I’ve learned. Masks are fine (and smart), but give me a bunch of gaiters and I’m good to go. Yes, I read the article about how they’re not as effective as masks. And I also read the follow up that clarified the initial report didn’t actually say that. I got my COVID test last week (negative!) and I’ve been mostly wearing gaiters this whole time (and, you know, socially distancing like a champ). So I’m fine with it. Plus, WUH BOUT MAH RAIGHTS?

I’ll be honest, 75% of the excitement of wearing a neck gaiter is pretending you’re an old-timey bank robber as you walk into 7-11 to buy a Diet Coke and Ferrero Rocher three-pack. Protection from a highly infectious disease is just a bonus. W, (2-1) (2-1)

Duke Blue Devils: I recently watched “The Last Dance” and I gotta say, I think you guys went a bit nuts on that thing when it actually aired. Don’t get me wrong, it was entertaining. And for someone who was a teenager during the entire Bulls run, it was a great nostalgic trip. But, like, without any of the hype and social media madness around me, it was merely an enjoyable watch that did exactly what I’d expect a documentary series about Michael Jordan brought to you by Michael Jordan to be. There were so many times they could have pressed harder and there were so many voices we didn’t get to hear form, which is a shame. I don’t think we got the whole story, but then again that was probably the point. W, (3-1) (3-1)

at Clemson Tigers: Dabo’s a weirdo. We can say that, right? We’re all on the same about that now, I think. Great football coach. Fantastic pitchman for his program. He’s really good at his job for sure.

Wake Forest Demon Deacons: Time for the Sean Keeley Podcast Power Rankings as of September 3, 2020. The way this works is that, if every podcast in my queue released a new episode on the same day, this is the order I would choose to listen to them as of right now.

N.C. State Wolfpack: Jim Boeheim is on Cameo and none of you are doing anything about this? Admittedly, this is as much my fault as yours. But the fact that I haven’t seen a Cameo of Boeheim begrudgingly explaining why Don McPherson deserves the 1987 Heisman Trophy tells me how little I mattered to you all. W, (7-3) (6-3)

at Notre Dame Fighting Irish: Guys, it’s midnight on Thursday night right now because I forgot to write this until John reminded me earlier today so my brain is shot and I’ve got nothing else. But I still think of you all fondly and I look forward to getting excited about Syracuse sports again very soon and tweeting dumb things about them. But if we have to wait a while before that can happen safely, I’m all for that. Besides, Syracuse fans are already suffering from irreversible damage to our hearts, we don’t need to subject the players to that, too. L, (7-4) (6-4)