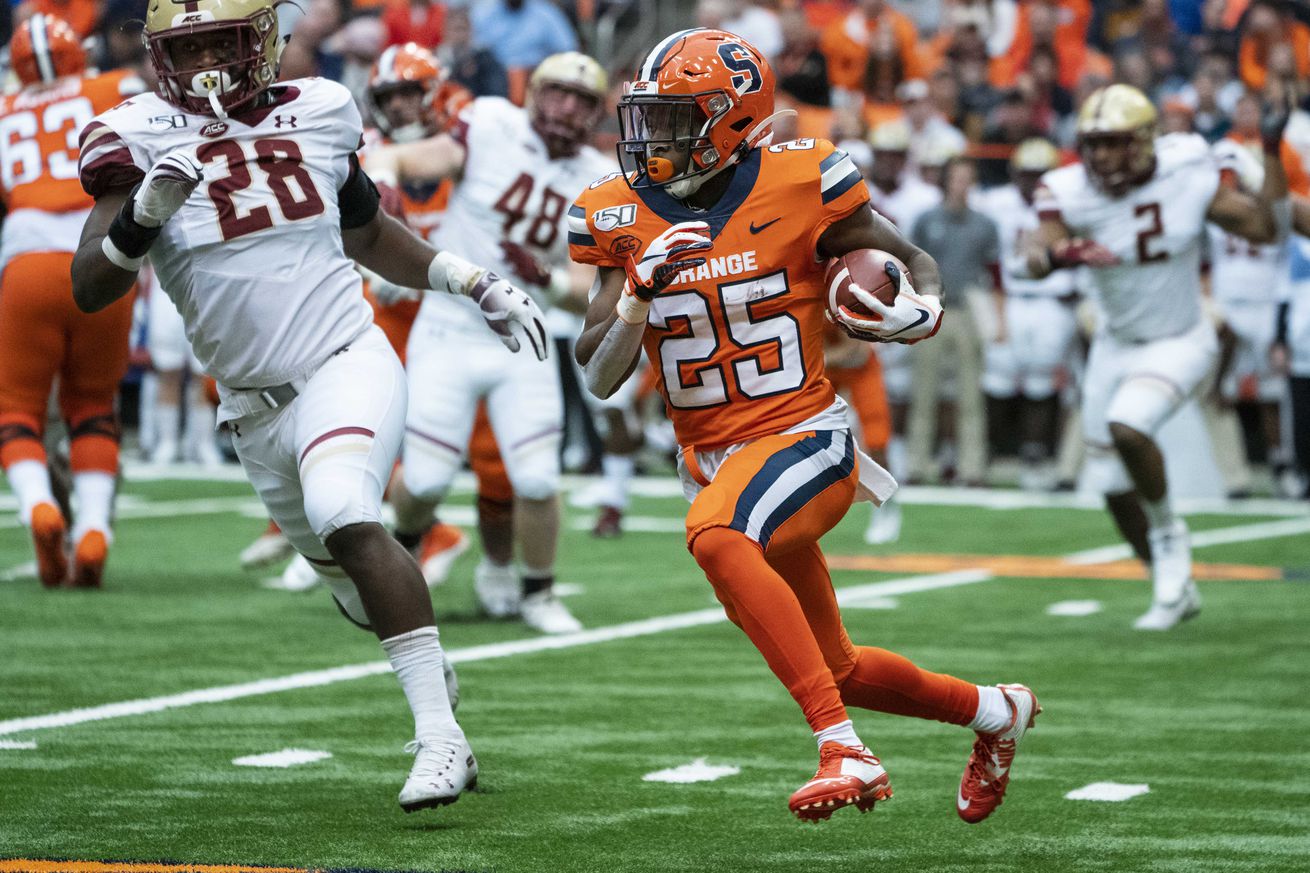 I get the optimistic one!

Ed. Note — As has become a tradition (?) here, TNIAAM writers will tell you all week why this year’s Syracuse football team will finish with certain win-loss records. These projections will get better as we go along, so hopefully you’re done being mad around now, or Thursday.

So, you all at this point probably know that I tend to be pragmatic, but also a bit optimistic on what I see on the field. I was real pumped about the pre-COVID schedule and how it lined up. Thought there was a good chance at a bit of a cushy bounce-back season. The new schedule gives those happy feelings a bit of a hiccup, but I’ll see if I can get us where we’re going.

at North Carolina Tar Heels: With the talent Mack Brown has been pulling in, I’m not too sure what to make of this game, but opening on the road definitely doesn’t do any favors to the Orange this season, especially in-conference. L, (0-1) (0-1)

at Pittsburgh Panthers: Stupid things always happen when Syracuse travels to Pittsburgh. I don’t know why, but it’s true. Both football and basketball, its like a weird bogey-team. Were it not for the fact that it’s the second road game in a row, against a top defense, I would pick a win. I’m not sure I trust Kenny Pickett to get the job done for Pitt, but I say that every year and he somehow does. L, (0-2) (0-2)

Georgia Tech Yellow Jackets: Colgate was going to be the first ever game under the new Dome. Instead we get the Rambling Wreck, who are still in the midst of changing up what their entire offensive identity is. I think the Orange hang on in this one and get the win to open the new facilities. W, (1-2) (1-2)

Duke Blue Devils: New addition Chace Brice already can hang one win over the Orange on his wall, leading the comeback in the 2017 Clemson game, when they eeked out a win to avoid losing two straight to the Orange. I don’t think however, that he’s working with the same weapons in Durham. Orange walk out of the Dome, 2-0 under the new roof. W, (2-2) (2-2)

Liberty Flames: I really have no idea if this game actually happens, but if it does, I think we chalk it up to a big win and get some of the young guns reps. W, (3-2) (3-1)

at Clemson Tigers: On the road? Two of the best offensive weapons in college football on the other side? Nah. I’m not thinking this one’s happening this year. L, (3-3) (3-2)

Wake Forest Demon Deacons: The Orange don’t have to rely on Trill Williams and the play of the season to get out of this one. With Sage Surratt out, the Deacs offense can’t keep it together against Williams, Andre Cisco and the rest of the secondary, and Wake misses Jaime Newman. W, (4-3) (4-2)

Boston College Eagles: Without the Dazzler, the Eagles can’t hang. More importantly, without one of the best running backs in the ACC, the Eagles shouldn’t hang. While I worry that they have a very good offensive line, some of the quickness and versatility that the 3-3-5 brings to the table should be enough to counter the battle in the trenches. W, (5-3) (5-2)

at Louisville Cardinals: Last year was a question mark that turned into an exclamation point for Scott Satterfield and his Cards. Micale Cunningham went from spot rushing QB to most efficient passer in Louisville history in an offseason, and they didn’t really lose a ton. Oh, and Syracuse is on the road. L, (5-4) (5-3)

N.C. State Wolfpack: If we make it this far into the year, the Orange need a real redemption game for whatever the stupidity that happened down at Carter-Finley Stadium last year. That alone is enough to propel Syracuse to the victory. W, (6-4) (6-3)

at Notre Dame Fighting Irish: We traded our non-conference schedule for a date with these guys? Really? That goes against every Cassillo rule of scheduling… Oh, it wasn’t our choice? Got it. Still not gonna win it. L, (6-5) (6-4)

In writing that up and looking at it, it’s a lot of coin flip games, which historically, I think season by season have gone really good or really bad for the Orange. An improved offensive line, and a new defensive scheme should help in some of those toss up games. If we can keep a modicum of momentum through the weird travel, there’s a lot to look forward to in this weird schedule, outside of ending the season in South Bend…