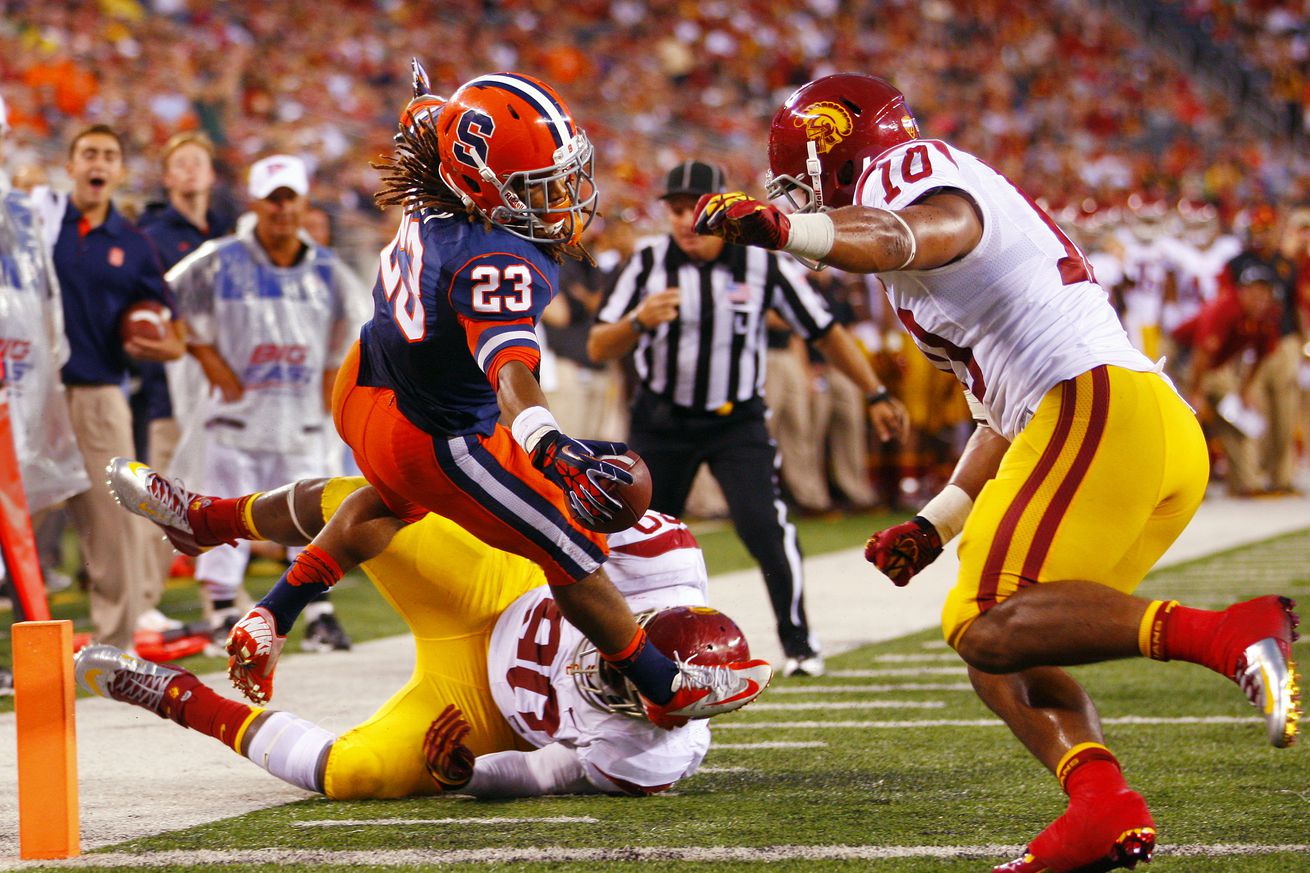 With at least four conferences (and assorted others) not playing this fall, we give you the best reasons for them to root for the Orange

At least for the time being, there will be college football played this fall — but without four of the 10 FBS conferences. Should that hold, fans of Big Ten, MAC, Mountain West and Pac-12 schools will likely be looking for a team to root for when games start back up next month. We want to make the case for them to support our own Syracuse Orange.

So no matter which team or conference you’re missing out on, here’s your perfectly rational sales pitch for why Syracuse is the answer to your football-less troubles.

Yes, we’ve had some issues over the years, and have dealt each other some pain at various points. But Syracuse is still just 49-90-9 against the 11 teams in the conference that joined before 2011. We only have a winning record against one of those squads (Wisconsin), and the Badgers once beat us 31-7 in Madison. So you’re all welcome for the wins we’ve added your resumes over the century-plus we’ve been playing one another.

As for the other three schools, Maryland, you’re welcome for last year’s 63-20 drubbing you got to hand to us. If not for that, you’d have had so little joy in 2019. So we’re glad we got to bring some to you on that fateful Saturday.

Rutgers, one of the only reasons you’re even in the Big Ten is because of what GERG did to the Syracuse football program around the same time Greg Schiano took over (the first go-around). We’re still waiting for our thank you card in the mail.

Nebraska, yes we had that issue in 1984, and we’re sorry for upsetting you at the Dome that year. It’s only fair, however, since you beat us 63-7 the season before. That win was part of how you were ranked No. 1 at the end of the regular season. Again, you’re welcome.

Syracuse has a winning record against nearly every MAC school, save Bowling Green (0-2) and Northern Illinois (never played), and have lost just five total games to all of these schools. And yet, because of the nature of college football and how pay games work, we’ve been helping fund MAC football programs for quite some time. We’re not the only ones, of course. But we’re among those responsible. It’s worth rooting for your benefactors in this case, no?

Admittedly, some schools may need a little more coaxing than that. Toledo’s certainly not over the blown extra point call from 2011, and they have every right to remain annoyed there. We’ll counter with the fact that us hiring Dino Babers away from Bowling Green opened up the MAC West for them in recent years. For BGSU, you have your two wins against us. It’s not our fault you lost the ability to make good head coaching hires since. CMU, you still owe us for knocking Eric Dungey out of the game in 2015.

Buffalo, you’ll never want to root for us, but what if we promise not to call Lance Leopold if Dino leaves?

There’s virtually no beef or even possible beef between the MWC and Syracuse, since the Orange are just 1-0 all-time against all 12 current members (thanks, overtime win over Wyoming in 2006). So realistically, there’s little reason for Mountain West fans NOT to want us to do well this year.

SU actually has quite a bit in common with the Mountain West, when you think about it. We’re all plucky upstarts largely away from football talent hotbeds (SDSU aside), and any season within sniffing distance of a College Football Playoff invite would be considered bucking the system. So we we’re kindred spirits already. Might as well make it official.

Admittedly, Syracuse is 17-13 against current Pac-12 schools, and it would be better if not for the 0-4 record vs. USC (the Orange actually have a .500 or better record against every other school they’ve played in the league, save Washington). But importantly, we turned down a Rose Bowl invite for the 1916 game, which would’ve matched SU up against Washington State at the time. Wazzu’s ability to beat up on Brown instead helped the then-Pacific Coast Conference notch a win in the game a year after Michigan trounced Stanford, 49-0. There’s more to the rest of the story, but it’s fine. Just give us credit.

Babers has spent quite a bit of time on the West Coast, and has worked at both Arizona and UCLA. With Syracuse’s recent offensive success and the Pac-12’s struggles, the fact that we didn’t face any teams from the league could’ve actually been a gift (despite our own issues). Also, Dungey is from Oregon. And while they probably would’ve preferred the Ducks had signed him instead, we potentially put a spotlight on Oregon high school talent by having Dungey as a four-year starter.

Beyond the opponent histories and other random facts, all of these now-displaced fans should be able to appreciate a bit of an underdog story. SU is rarely at the top of college football, and doesn’t have a lot of recent success to keep us satisfied (we’ll always have 2018, of course). This season will be weird as it is, and what’s weirder than an atypical team winning a lot of games? At the very least, you don’t want Clemson and Alabama winning. Rooting for us could help prevent that (or at least make you feel like you’re not just hate-watching those two squads).

Also, we should be an interesting team to watch, if nothing else. No promises on the defense overall, but Andre Cisco and Trill Williams are fun playmakers to see in action. The pass-rush will be aggressive. Plus the offense should be improved, which means we’ll see Tommy DeVito make some bigger throws now that he has some time to do so. Taj Harris is one of the more underrated receivers in the country. SU has the promise of something entertaining happening every week, even if it’s also something bad.

Welcome aboard the Orange bandwagon, new friends. Just don’t ask why we retired the number 44. We honestly don’t know either at this point.