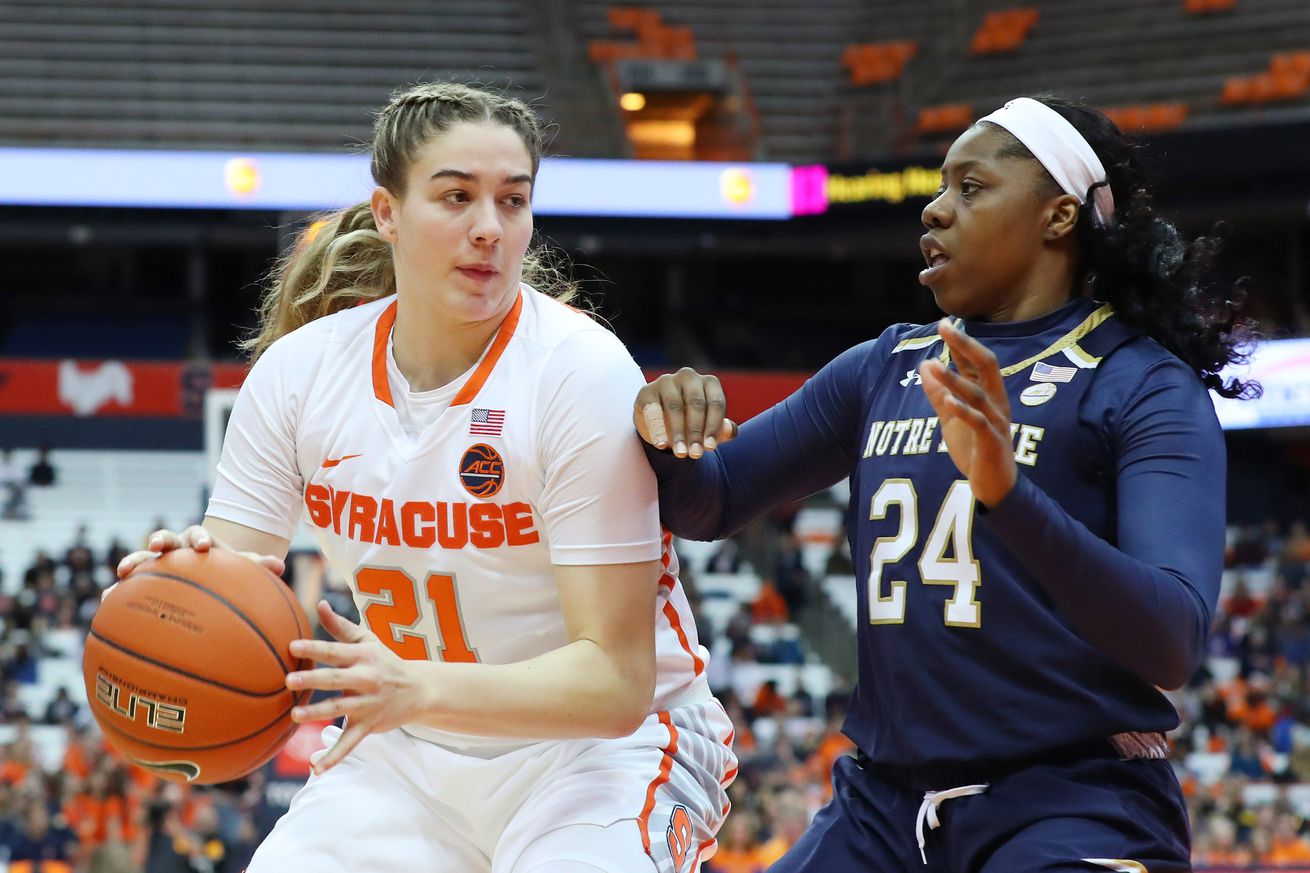 Emily Engstler has shown flashes of an elite college basketball player. Here is why this season will be her time to shine in the most competitive basketball conference.

“My biggest goal is to be someone that everyone can remember,” Emily Engstler said in a 2018 Bleacher Report interview after she committed to Syracuse.

2020-21 will be the year everyone remembers Emily Engstler.

If you have watched Engstler compete for the Orange over the past two seasons, you know she is a walking highlight reel. Between her undeniable passion and extreme athleticism, Engstler is every fan’s favorite and every opponent’s biggest foe.

At 6-foot-1, Engstler consumes the floor. You can’t help but keep your eyes fixated on her when she’s out on the court. Engstler is either scoring a lot of points or blocking shots that seem near impossible to stop.

Off the court, you would experience a more laid back Emily. She is also a positive person, always giving credit to the team for her success and reiterating her drive to get better for the next game.

Engstler has shown glimpses of an elite college basketball player over the last few years. Heading into the 2020-21 season, assuming it happens, Engstler has the tools to make her argument for All-Conference team in the most competitive women’s basketball conference: the Atlantic Coast Conference.

Before we get too far ahead of ourselves, let’s take a look at Emily’s resume:

Engstler was a five-star recruit with a scout grade of 98 coming out of St. Francis Prep High School. The New York City native received numerous awards in her high school days, including the 2018 New York State Gatorade Player of the Year and McDonald’s All-American. In just two years at St. Francis Prep, Engstler racked up over 900 points.

Coming into her freshman season in Central New York, Engstler was named to the ACC’s Preseason Newcomer List.

During her first year in the Orange and White, Engstler had flashes of powerful basketball. Her season-highs included 17 points, 11 rebounds, and four steals. She averaged 4.9 points and 4.5 rebounds in 14.3 minutes and tallied five double-digit scoring games. Overall, Engstler had a solid freshman year.

The 2018-19 season was about finding where exactly Engstler fit in Coach Quentin Hillsman’s system. Engstler appeared in almost every match-up, but her minutes differed from game to game. Some days she would play the entire game, other times she would only make a brief appearance. It wouldn’t be until her sophomore campaign that Engstler found her place for the Orange.

Not only did Engstler find her role in Coach Q’s playbook, but she also earned a spot in his starting lineup. Engstler started all 31 games for Syracuse last season and averaged a near-double-double with 9.0 points and 9.2 rebounds in 29.3 minutes.

Engstler was a double-double machine in 2019-20, recording nine in points and rebounds.

Though she has improved from her freshman season, Engstler is still nowhere near the ceiling of her talent level. With an extended offseason due to COVID-19, Engstler has more time to train, recover, and prepare for next season.

Now in her third year in Central New York, I strongly believe Engstler is ready to make the jump from Syracuse star to ACC star. Engstler is a name everyone needs to write down, underline, circle, star, and highlight.

The Orange were ranked at No. 23 in ESPN.com’s way-too-early top-25 rankings for 2020-21. They were also predicted to be the sixth seed in the latest NCAA March Madness bracketology. Whatever number they are ranked and wherever they end up in March 2021, Emily Engstler is going to be a big part of that success.

With Engstler, a No. 4 recruiting class, and the comeback of Tiana Mangakahia, Syracuse Basketball will reach new heights in 2020-21.