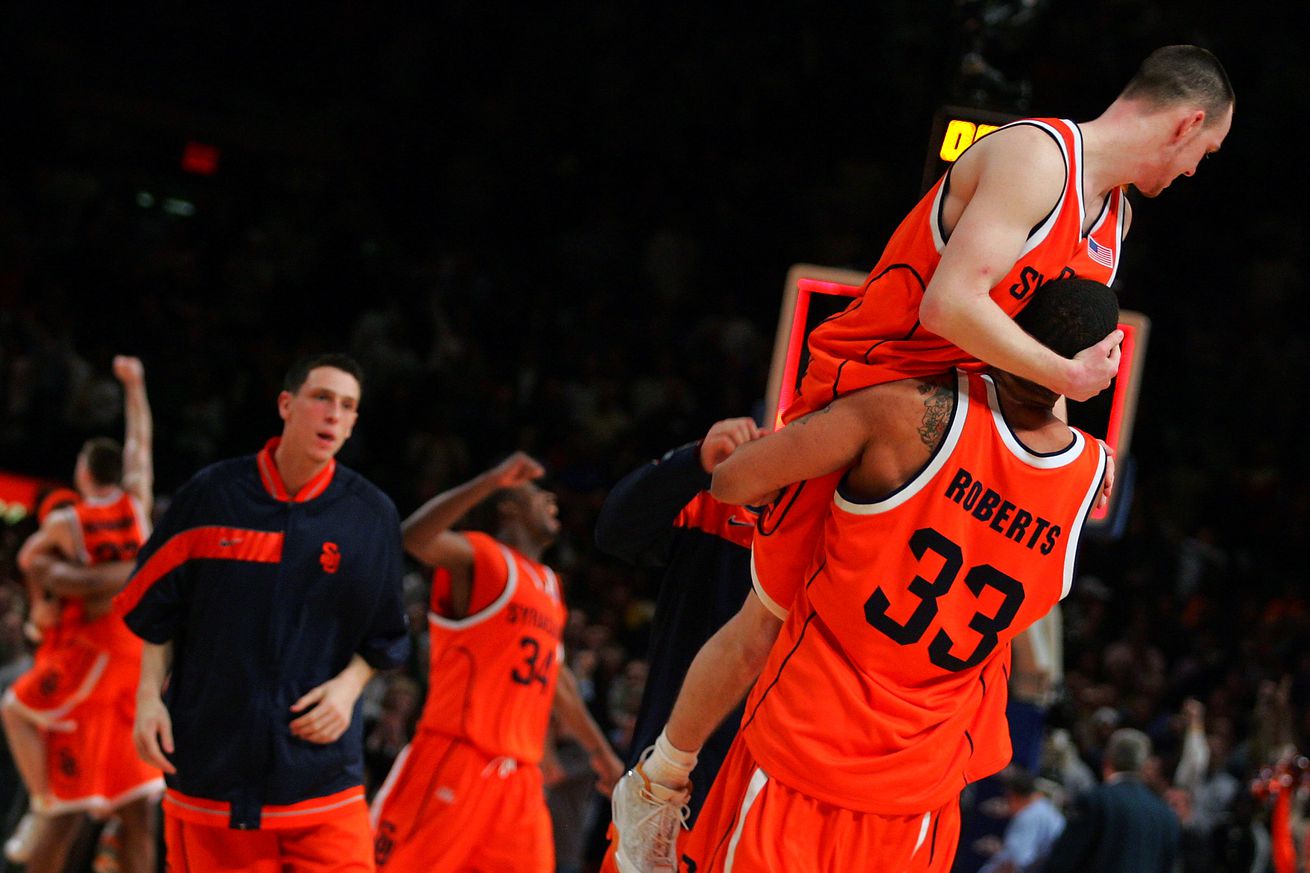 Hint: Two are in the lead photo.

As the fate of college sports hangs in the balance for 2020 and we continue to come up with creative (yes, reaching, even) ways to produce content, we’ll be rolling out Syracuse Orange men’s basketball superlatives in categories over the next few weeks. Point is to make these more discussion-based, as opposed to absolute fact since these types of things tend to be subjective based on varied criteria.

We’ll start today by looking at some of the best shooters in Syracuse history, with a few parameters in place. It’s worth mentioning that the three-point line was not officially installed by the NCAA until the 1986-87 season. Earlier versions existed in various conferences (including the ACC), but the 3-point line’s inception wasn’t officially recognized in the college game until 1986.

Also, no one-year players. And we’re considering players limited only to the Jim Boeheim (coaching) era, just so a larger number of people can actually have experience watching the players in question. Anyway, let’s dive in.

I went with players that I actually watched and I came close to putting John Wallace here but in the end I think Janulis and Moten were a bit better in terms of shooting. The mid-range game isn’t favored these days but anytime Moten pulled up from 16-18 feet you felt it was going in. Percentages weren’t a huge overall factor in my choices as I wanted to think about players who I’d feel comfortable having the ball in their hands when you need a shot. Obviously clutch shots stand out and Rautins, Janulis and G-Mac all hit memorable post-season game winners.

I’m going to be a bit more specific and limit this to the best 3-point shooters in Syracuse basketball history and install some parameters here: To be eligible players had to play at Syracuse for at least two years, shoot a minimum of 35% beyond the arc for their career and make at least 100 3-point field goals.

It’s hard to put anyone besides McNamara at No. 1 as he made 400 3s in his career while nobody else has made over 300. Other players shot a better percentage, but McNamara didn’t have as much help in 2006 when he shot 33.4% from deep his senior year. His career best was 38.9% in his sophomore year.

Rautins gets the No. 2 spot as he sits second only to McNamara in career makes with 282. He was a career 37.4% shooter from distance and his form was by the book. Shumpert won’t win points for his form, but his effectiveness from range can’t be questioned. He’s fourth all-time in makes with 249 and shot 37.8% for his career.

Matt Roe didn’t get as many attempts as some of the other guys, but he shot an impressive 43.3% from deep in his three years at SU. Sean Keeley’s boy Janulis rounds out my top five because Sean made me do it. Just kidding. The guy shot 39.9% from deep. Absolute sniper.

Roe creates a bit of “what if” given his late transfer to Maryland, but before that, he was a sharp-shooter from outside at 43.3% for three years — despite not being one of SU’s primary scoring options. Gerry needs no introduction, as one of the most lethal distance shooters and beloved players in program history.

Rautins may get dinged a bit because he was a much better shooter in the last two years of his career, but his three-point abilities were also a major part of the team’s offense in those last two seasons. Janulis was excellent from a volume perspective over his career, but also hit at a great clip — he has three of the top 14 three-point shooting seasons (from an accuracy standpoint) in school history.

Monroe is probably the name least talked-about, but that’s largely due to both his role before senior year and the fact that the three-point shot was only introduced during his final season. The Rochester guard hit 79-of-180 threes (43.9%) as a senior, while putting up 12.9 points per game and basically parking himself on the perimeter. Would be interesting to see what his numbers could’ve looked like with a more complete career with the arc at his disposal.

Now it’s your turn. Who do you think are the best shooters of the Boeheim era?