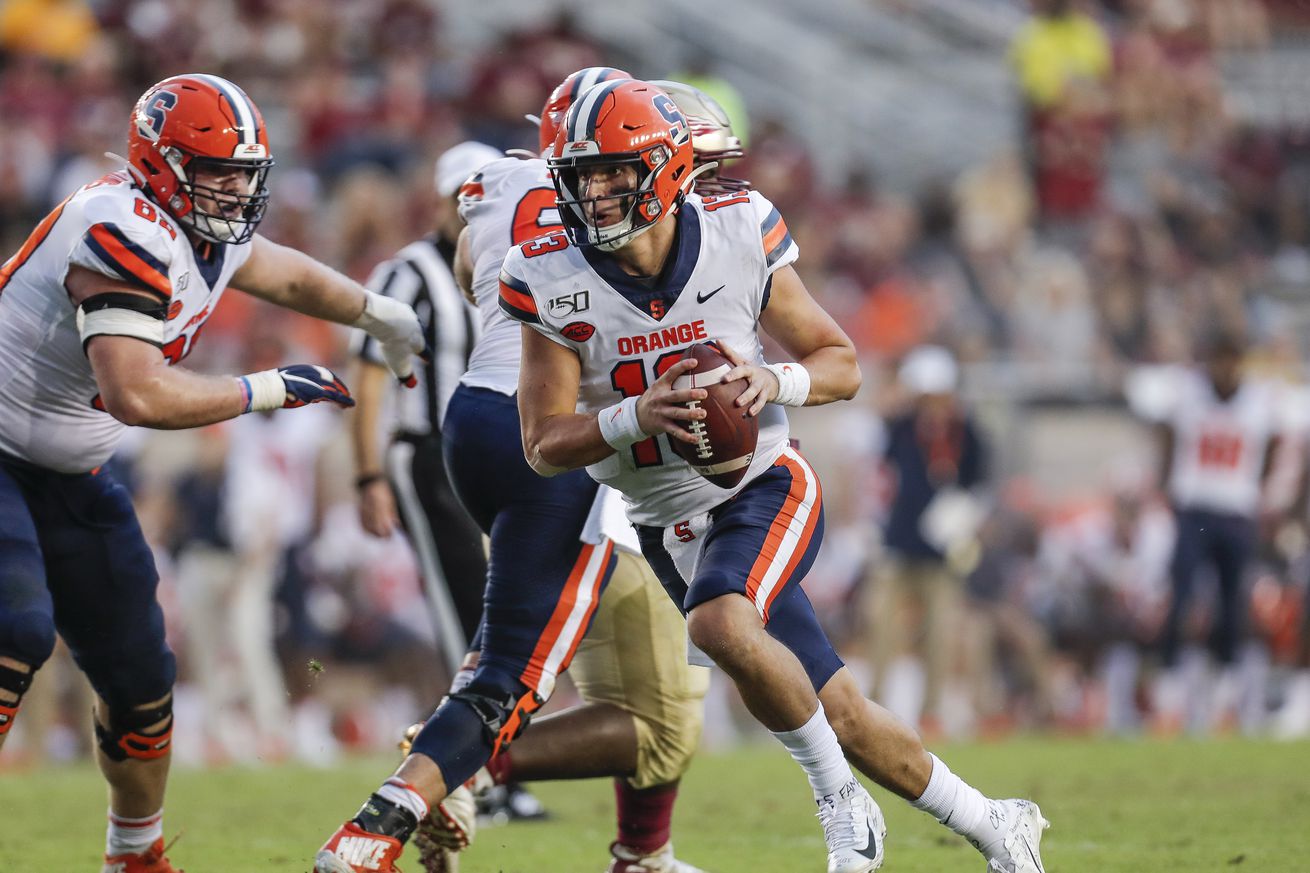 In a way, we always have questions about Syracuse football

As usual, it seems like a great time to preview the Syracuse Orange football season. Naturally, we’ve all got questions about how Syracuse is going to perform in a crazy 2020 that continues to throw punches left and right. Today, we’ve got the TNIAAM staff putting forward one question that they have about the current Syracuse football team. What do we want to know about this squad?

Kevin – How will the Syracuse defense create pressure on opposing quarterbacks?

My question for the upcoming season is how will the Syracuse defense create pressure on opposing quarterbacks? With the departure of Alton Robinson and Kendall Coleman and the switch to the 3-3-5 defense, will we see a lot of blitzing this Fall? If so, will it just be the linebackers or are we going to see the defensive backs utilized in the pressure game more than in the past?

Steve – What new wrinkles will Sterlin Gilbert bring to the Babers offense?

While Gilbert comes from the same coaching tree, groomed under our head man, himself, he’s also had some influence peppered in there from a few other notable college coaches, most notably Charlie Strong. He also worked as an OC under Philip Montgomery, who was an OC in this type of system before taking over the head coaching position at Tulsa. Do we see the same trap-heavy run game and sideline push that we did under the Lynch era, or will we be pushing outside that bubble and diversifying the play calling more? The core tenets will be similar, but what Dino and Gilbert can do with what should be an improved offensive front, and hopefully a more stable Tommy DeVito (read: on his feet more than his back), will be foreshadowing where this offense will go.

Andy – Who steps up as an offensive weapon?

With the questions around Abdul Adams and Jarveon Howard’s participation this fall, the offense is looking like a bunch of high ceiling recruits who will get chances early to solidify roster spots. While Dino Babers offenses have shown an ability to ride the hot hand to success, I want to see which players step up into roles that force them into snaps every down. Can Taj Harris get more consistency with Tommy DeVito? Does Jawhar Jordan have what it takes to turn exciting flashes into more consistent production? Which of the five other wideouts expected to see snaps can create big plays? It’s going to be crucial for the Orange success if the O-Line isn’t improved from last year.

Christian – Can the Syracuse offense set up 2nd or 3rd and short situations frequently?

As Steve mentioned, Mike Lynch offense’s saw a heavy concentration on the trap run game and the sideline push. This was achieved through pounding the ball up the middle and throwing bubble screens quite often. However, SU found itself in multiple 2nd or 3rd and long scenarios where the offense would need to get eight or more yards for a first down. You can’t always rely on Tommy DeVito’s arm to bail you out of those situations, even if the offensive line is drastically improved from 2019. It would do a lot for the players, coaches, and fans’ sanity if the offense needs less than five yards to get a 1st down. Syracuse seems to panic in those 3rd and long situations too much. Maybe the new wrinkles introduced by Gilbert that Steve mentioned and that DeVito has talked about can create opportunities where the Orange only needs a couple of yards to move the chains.

Syracuse has gotten burned by big plays in recent years. And while we can accept it when we’re also forcing a lot of turnovers, it does create an uphill battle when the offense is struggling. I’d like to see the defense strike a balance between playmaking ability (which they obviously have) and more consistency stopping big plays after allowing 195 plays of 10 or more yards last year. This may put a spotlight on the linebackers, who aren’t the team’s strength, but their development could wind up dictating a lot this season.

What’s one question that you have about the Syracuse football team? Sound off in the comments below.