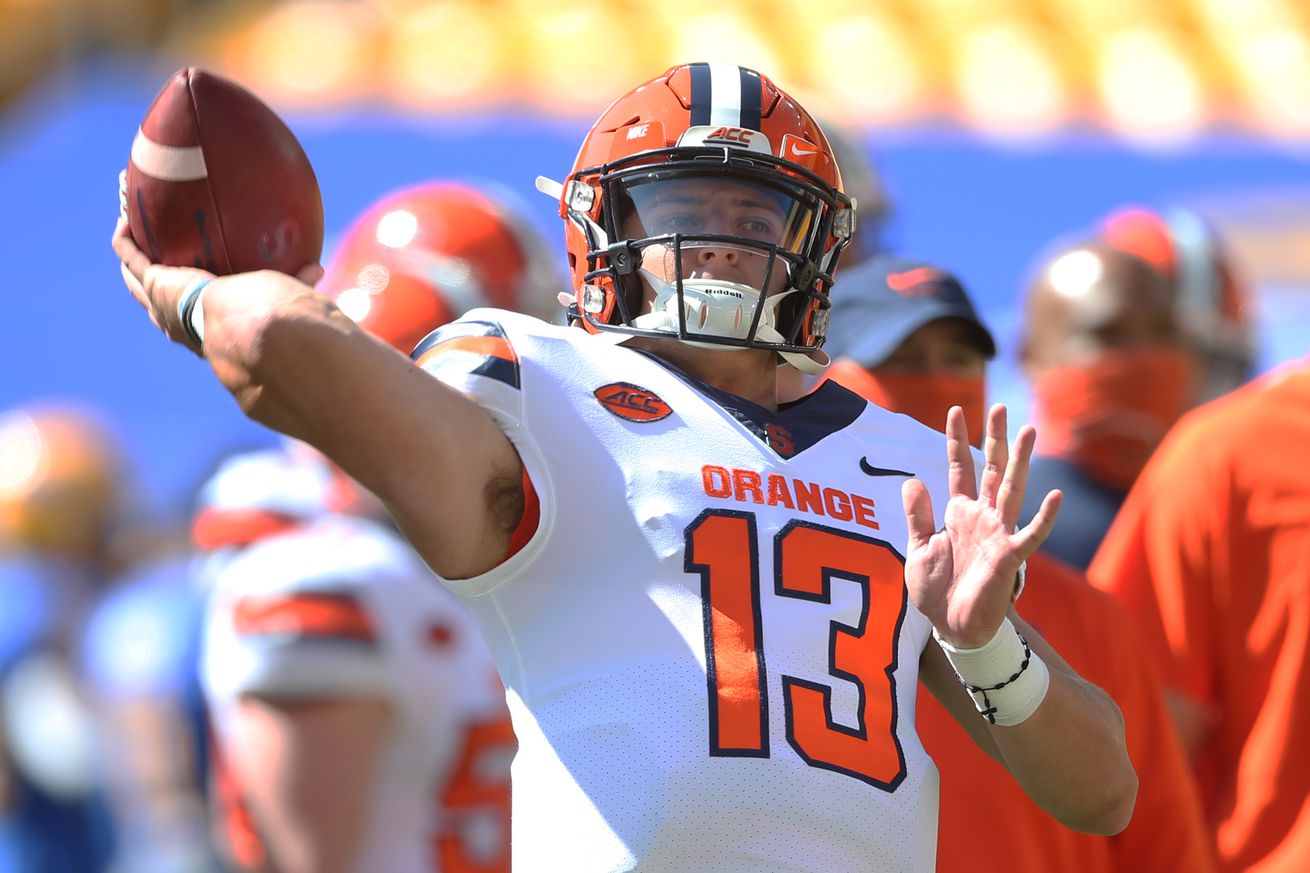 Before we call for change, let’s look at what’s going wrong and how much DeVito has control of

Tommy DeVito has struggled mightily so far in 2020.

That much is obvious to even the most casual observer two weeks into this Syracuse Orange football season. SU’s starter has thrown for just 144 yards on 22-of-46 passing. He has an interception, zero touchdowns and has been sacked 14 times. None of this is good — especially for an offensive system that relies heavily on effective quarterback play.

DeVito’s struggles have led to a growing chorus of fans calling for him to be replaced. Backup Rex Culpepper’s 69-yard touchdown pass against Pitt didn’t quiet those voices, despite his own accuracy issues for much of the rest of Saturday. If we don’t see an improved DeVito shortly, we could see the starting job going elsewhere; to Culpepper or one of the freshmen.

Before we talk about moving on, however, I did want to look at where DeVito’s problems lie this season (and last, too). And how much of those errors are his own fault, vs. those that could potentially find themselves replicated no matter who’s under center.

This is not a statistical point, as much as one through repeated observation. Even during his best games at Syracuse, Tommy’s been one to lock in a single read and miss open receivers. There are exceptions when he goes through his progressions well, but unfortunately, we haven’t seen much of that in 2020.

Part of this is due to constant pressure (we’ll get there). But part is due to a decision tree that’s seemingly broken down at this point. For most pass plays, you see DeVito either lock in on his first option, make a quick decision to run or tuck it and take the sack. Despite what you want to believe, we did see this from Eric Dungey from time to time. But he evolved as a better passer over the course of his career, and was able to opt for a variety of different choices. DeVito, unfortunately, has yet to develop similarly — despite arguably being a faster (and safer) runner.

You can see his issues more so when Culpepper arrives in relief. While it’s easier to just get the ball out quickly and off-target, Culpepper still showed himself able to make a rapid decision shortly after the snap. So at the very least, we know it’s not impossible to have a passing game given the other factors hampering this offense right now.

As you know, DeVito was the most-sacked quarterback in the country last year, and is already off to a roaring start this year, having been hit behind the line 14 times. Some of that comes from the decision-making issues above. But the offensive line’s problems haven’t helped matters. According to Pro Football Focus, Darius Tisdale (78.6) is the only Syracuse offensive lineman to grade out over a 70 in pass blocking so far this year. The rest of the grades look like this:

That’s not a recipe for success, for any QB, and it shows itself in Syracuse’s passing results. Just four FBS teams have passed for fewer yards than the Orange’s 254 this year, and the constant duress and hits take a toll. DeVito and Culpepper have faced pressure a combined 31 times this season, attempting 12 passes and completing just one (that one goes to Rex, for nine yards). Neither quarterback’s rating is all that great against pressure — per PFF, Culpepper grades out as a 53.7 on four plays, while DeVito’s a 39.2 against 27 such instances — but it’s clear that Culpepper’s finding ways to get the ball out in these situations, while DeVito clearly isn’t.

With Dungey under center, the Orange offense was at its best when the traditional run game was producing. Due to offensive line issues, in part, we haven’t seen much of that since DeVito took over as QB. ‘Cuse averaged just 3.69 yards per carry on the ground last year, and most of that came from a late-season boost when OL issues were seemingly fixed. This year, that averaged has dipped to just 1.72 yards per carry. Handoffs have basically been worthless as SU’s top back, Jawhar Jordan, has averaged just 2.44 yards per carry.

The lack of a run game puts a lot more pressure on the passing attack to steer the offense — never the point of Dino Babers’s system — and also lets defenses bring pressure without fear of consequences.

Sean Tucker had just four carries on Saturday, but seemed to show us something, by picking up 23 yards on four rushes. If he and Jordan can find more production, it should automatically alleviate some pressure on whoever is playing quarterback for Syracuse.

Though not part of the “rushing game,” it’s also notable that pass blocking has been a struggle for Orange running backs this year too. Last year, Jarveon Howard and Abdul Adams were two of the team’s top three pass-blockers by PFF rating. In 2018, all three SU running backs had a pass blocking rating of 77 or above.

While some of DeVito’s struggles come from decision-making breakdowns, there are plenty that are also attributable to poor play-calling. Since Sean Lewis left for the Kent State job, play-calling at Syracuse has been far less imaginative and largely relied on the improvisational skills of the quarterback. That worked in 2018 under Dungey, despite a less efficient attack by national standards. In 2019, the wheels came off for DeVito in part because the aggressive nature of Babers’s approach was neutered.

Last year’s struggles led to Mike Lynch no longer being part of play-calling, and Dino handed the reins to former OC Sterlin Gilbert. Two games in, we can see little imagination in Gilbert’s play-calling aside from a CFL-type wrinkle in week one. The epitome of the issues came in the red zone vs. Pitt, when following an effective screen, Syracuse called the same QB draw with two different players to settle for a field goal.

I didn’t see Gilbert as a long-term option at Syracuse due to a journeyman resume, and his performance with Syracuse so far has potentially made that even more true. Handoffs are too basic, called runs for DeVito are too frequent and without much time to throw, the Orange don’t seem to be calling quick slants or screens to combat that. Tight ends are basically non-existent.

In the past, Babers’s system has thrived on simplicity and exploiting what you force the defense to do. Running the ball up the middle draws the defense away from the sidelines, so you use screens. The screens force corners closer to the line of scrimmage, so then you go up top and exploit single coverage downfield. Syracuse’s offense hasn’t used the middle of the field extremely well since Babers arrived, but mid-range routes (like those Steve Ishmael used to run) could find a productive home with so many other concerns for the defense.

This year, DeVito has yet to complete a pass longer than 10 yards (!!!). He’s 0-for-12 beyond 20 yards, and 0-for-1 from 10-20. Those intermediate routes disappear quickly when a QB is under pressure, since they typically take some more time to develop, but one throw is jarring. The lack of deep completions — and the fact that 75% of them are to the right — show an inability to be on target (though there were drops in there too) and some very clear tendencies for defenses to game-plan against.

Interestingly, though, DeVito is 22-of-28 from 10 yards or closer. Unfortunately, 12 of those completions come at or behind the line of scrimmage, though. These sort of patterns would seem to indicate he’s throwing screens and finding safety valves, but we haven’t really seen it yet. Instead, these are designed short yardage plays like bubble screens. The problem is they’re not working because there’s no reason for defenders to be anywhere but right on the line given DeVito’s passing chart so far.

As noted, some of these issues are DeVito-specific, and others aren’t. The player we’re seeing now clearly isn’t the one that first arrived on campus or the one that performed admirably in wins over Florida State and North Carolina, which leads me to believe a lot of this is mental — vs. physical. He’s been sacked more than anyone since the start of 2019. He’s shell-shocked, at this point. That’s not an excuse. It’s an explanation for part of how we got here.

On the decision-making notes above, I think Syracuse quarterbacks could and should fare better than what we’re seeing here, and maybe that leads to better results from an option other than DeVito. Still, the run game, play-calling and line issues aren’t just vanishing overnight. The Orange have some major challenges to overcome on offense, and any QB will have their work cut out for them.