After the loss, Syracuse earned the fifth overall seed in the NCAA Tournament and will play in a pod with Fairfield, UMass and Princeton in the first two rounds. Though the Orange are the highest seed in the group, Princeton will host because SU didn’t meet the NCAA’s travel and lodging requirements due to its commencement ceremonies this weekend.

In head coach Kayla Treanor’s first year, the Orange finished 13-4 in the regular season and 6-2 in conference play. Last season, they fell 16-10 to Boston College in their third-ever national championship appearance. On Friday, Syracuse will make its ninth straight tournament appearance.

Fairfield puts up an average of 21.05 points per game, 22nd best in the country, while Syracuse ranks seventh with just over 24. Seven different Stag players have secured over 40 points, led by second team All-MAAC selection Elizabeth Talluto’s 67.

Per Lacrosse Reference, Fairfield had the 68th toughest schedule in the nation, significantly weaker than the Orange, who played the third toughest. It should be a fairly easy opening round for Syracuse, who simply need to create more offensive possessions at the draw circle. The Orange rank fourth in the country in the draw circle while the Stags are 64th.

Second round: Winner of Princeton vs UMass

Princeton and UMass both finished the regular season undefeated in conference play. The Tigers won the Ivy League Tournament and finished as the No. 9 team in the country, per the Inside Lacrosse poll. The Minutemen, who finished No. 22, were upset in the Atlantic 10 Conference Tournament championship, but received one of the 14 at-large bids.

Both teams rank in the top 11 in terms of ELO rating, per Lacrosse Reference, and it isn’t clear who’s the favorite.

But the Orange have scored more while playing significantly stronger opponents and will likely advance to the quarterfinals. Still, their second round matchup poses more of a threat than Fairfield.

Quarterfinals: Winner of No. 4 Northwestern/Central Michigan vs. winner of Notre Dame/Michigan

Barring a major upset, Syracuse should expect to face No. 4 Northwestern, who defeated SU 16-15 in overtime earlier this year. Though Emily Hawryschuk recorded a then-career-high nine points, Syracuse choked a 15-12 lead with 4:23 to play.

Northwestern ended the game on a 4-0 run led by a hat trick from Lauren Gilbert and a goal from Jill Girardi. Then, Gilbert secured the most crucial draw control to start overtime, and SU committed a three-second violation on the subsequent possession.

Gilbert scored at the free position and handed Syracuse its first loss of the season. Since then, Northwestern has lost just three games, all to top 15 teams.

Should Northwestern get upset, Syracuse will likely face Notre Dame or Michigan. Prior to its defeat to the Wildcats, SU played Notre Dame. The Orange blew a five-goal lead in the fourth quarter, but were saved by a Meaghan Tyrrell overtime goal.

The Wolverines have never played the Orange before. Michigan picked up only two wins in Big Ten play, but has notable road wins over then-No. 5 Notre Dame and then-No. 18 Johns Hopkins. The Wolverines have struggled recently though, losing five of their last six games. 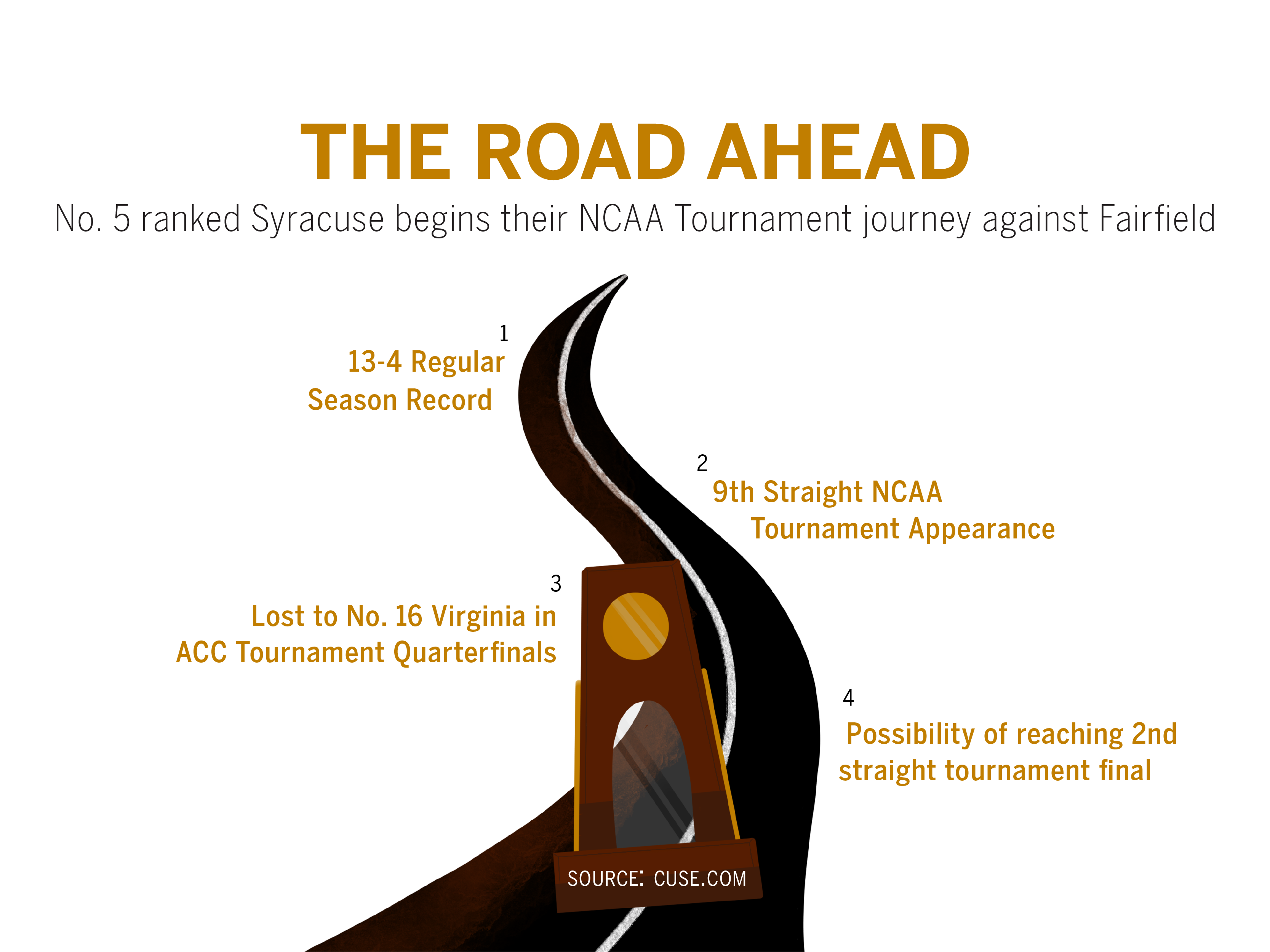 Semifinals: Most likely No. 1 North Carolina or No. 8 Stony Brook

Should the Orange advance to their ninth Final Four, they will likely face the top-seeded Tar Heels or No. 8 Stony Brook. UNC, the ACC Tournament champion, enters as the only undefeated team remaining in Division I. Right behind them are the Seawolves, who only lost to Northwestern and Syracuse.

In April, the Tar Heels squeaked away with a 14-12 victory in the Dome. The Orange kept it close despite the losses of Emma Tyrrell and Megan Carney before and during the game, respectively.

Carney has since returned from the injury, providing another attack option for the Orange, who will need as much firepower as possible against a Tar Heel team that ranks in the top five in assists per game, shooting percentage, clearing percentage and scoring offense.

It’s likely that the Tar Heels are in the Final Four, but if it isn’t the Tar Heels then it’ll likely be Stony Brook. The Seawolves have the nation’s best scoring defense, conceding just under seven goals per game, and enter the tournament on a nine-game winning streak.

This side of the bracket also includes Virginia, Southern California, Rutgers, Saint Joseph’s and Drexel, all of which are unseeded. However, all five teams rank in the top 35 in ELO rating, per Lacrosse Reference.

National championship: Most likely No. 2 Maryland, No. 3 Boston College or No. 6 Loyola Maryland

If the Orange advance to their fourth-ever and second consecutive national championship game, they could face No. 3 seed Boston College for a rematch of the regular season finale. However, if the Eagles are eliminated, the Maryland Terrapins and Loyola Maryland Greyhounds are strong contenders to advance to the title game.

Boston College and Maryland have first round byes. But the Eagles’ path isn’t the easiest, as they will likely face a top-25 team in Denver in the second round.

They defeated the Pioneers 9-5 in March, but the game ended at the end of the third quarter because of weather issues. Boston College boasts the top scoring offense in the country led by reigning Tewaaraton winner Charlotte North, Jenn Medjid and Belle Smith who combined for 55.4% of the Eagles’ goals.

Maryland finished with a perfect 6-0 Big Ten record and suffered only one defeat. They will be waiting for the winner of Duke vs. Johns Hopkins after their bye.

In 2014, Maryland topped Syracuse 15-12 to win its 11th national title in program history and it most recently played Syracuse in 2020, when the Orange won 10-5. The Terps are led by Aurora Cordingley, who has recorded 111 points in 18 games, 49 more than the next closest player on the team.

Other possible matchups include Loyola (MD), who the Orange defeated 14-13 in March. Similar to the game against Notre Dame, SU had a 14-9 fourth quarter lead, but a 4-0 Greyhound run cut that deficit to one. In the final moments, a Greyhound mistake allowed Syracuse to clear and secure the victory.

The post What to know for No. 5 Syracuse’s path in NCAA Tournament appeared first on The Daily Orange.