No. 8 seed Syracuse will face No. 9 seed Georgia Tech on Wednesday afternoon in the first round of the Atlantic Coast Conference Tournament in Louisville, Kentucky.

Syracuse won just one of the final eight games in the regular season, dropping from seventh to eighth place in the ACC. The one win, an upset 7-6 walk-off win over Clemson, was the Orange’s first win over a ranked opponent all year.

Syracuse (20-23, 12-20 ACC) had never advanced past the first round in its six previous ACC Tournament appearances. It entered this year’s tournament with its highest ranking since 2017. The Orange last won an opening-round conference tournament game in 2011 — when they were still a member of the Big East. Syracuse was the No. 3 seed in that tournament and ended up winning the Big East Championship.

If Syracuse defeats Georgia Tech in the first round, it would rematch with No. 1 seed Clemson in the quarterfinals. An upset win in that game would send the Orange to the semifinals, where they would face the winner of No. 4 Virginia Tech and No. 5 Notre Dame. Should the Orange complete an unlikely run to the championship game, the likely opponent would be No. 2 Florida State.

Here’s what you need to know about Syracuse and its opponents ahead of the ACC Tournament.

First Round — No. 9 Georgia Tech

The Yellow Jackets (19-25, 11-19) were the only ACC team Syracuse did not face this season. The Orange’s home opener against GT on April 1 was canceled due to inclement weather and was not made up. Georgia Tech played just 30 conference games this season — two fewer than Syracuse did — and sits right behind Syracuse with an overall 0.432 win percentage.

Georgia Tech is riding a five-game win streak into the first round matchup following a sweep of Virginia, when it outscored the Cavaliers 27-6. The Yellow Jackets sport a .282 batting average, the fifth-highest in the ACC, while Syracuse’s .221 average is the conference’s worst.

Tricia Awald and Emma Kauf are the top hitters for the Yellow Jackets, batting .413 and .356, respectively. Syracuse’s Neli Casares-Maher, who leads the Orange at .349, is the Orange’s leader in every offensive category and enters the postseason with seven hits in her last eight games.

After not pitching in Syracuse’s regular-season finale, Alexa Romero will likely start against Georgia Tech, said head coach Shannon Doepking. Doepking said that Romero will play a large role as to whether the Orange can win an ACC Tournament game for the first time.

“She gives us a chance,” Doepking said about Romero. “I think the team feels it because she’s our best pitcher.”

In its second season ever as a Division I program, Clemson (40-5, 29-5) captured the ACC regular-season title. The Tigers won three of the four games against Syracuse in the two teams’ final series of the regular season.

Syracuse lost the first two games of the series, but won the third game 7-6 due to a walk-off single from Geana Torres. But the next day, the Orange allowed their highest run total of the season in a 19-2 run-rule loss. 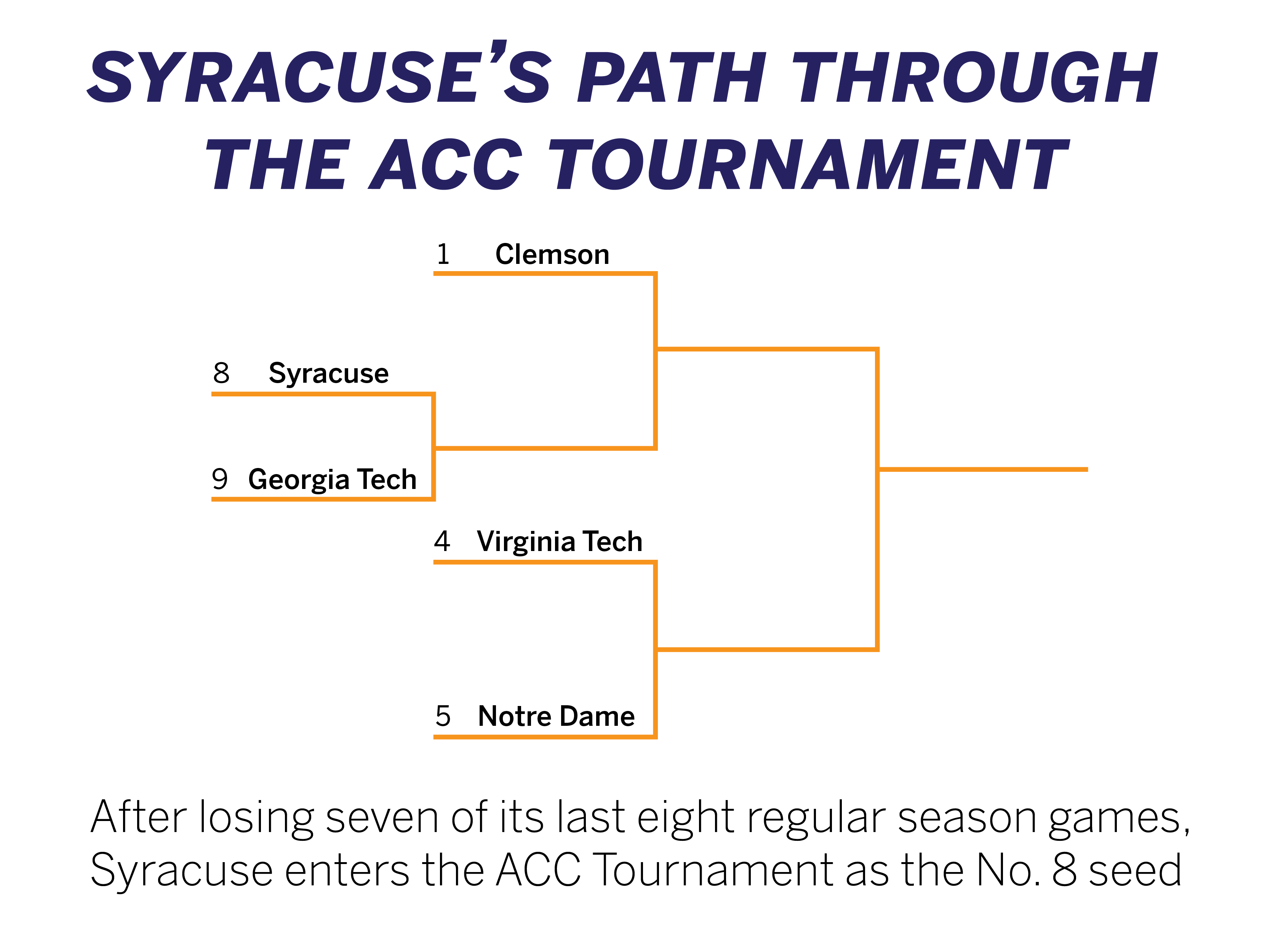 “I don’t think we’re ever going to get over the hump where it’s not just being okay with hanging with Clemson,” Doepking said following the series-opening loss to the Tigers.

If Syracuse wants to redeem itself after a disastrous end to the regular-season, it must find a way to overcome Valerie Cagle, Clemson’s top pitcher and hitter. Cagle recorded seven hits in 14 plate appearances against the Orange, which included five RBIs and a two-run homer in Clemson’s loss on Saturday.

On top of a .437 batting average, which is the second-highest in the conference, Cagle is also third in ERA at 1.18. Going into the Syracuse series last weekend, Cagle led the ACC with a 0.99 ERA, which increased to 1.18 after allowing nine runs over two starts against the Orange.

Semifinals — Most Likely No. 4 Virginia Tech:

No. 4 Virginia Tech (32-12, 23-11) is the favorite in its matchup against No. 5 Notre Dame, meaning Syracuse could face the Hokies again after they swept the Orange at home earlier this season.

That sweep included a series-opening no-hitter thrown by Virginia Tech’s Keely Rochard on April 30. It was Syracuse’s first time being thrown a no-hitter since facing Arizona State on Feb. 9, 2007.
Rochard, who leads the country with 288 strikeouts and has a 1.12 ERA — an ACC-best — started each game of the series. She allowed just seven hits over 22 innings and struck out 37 batters, including 16 in the no-hitter.
Loading…

“No matter what we do, the kid’s going to have high strikeouts, that’s just the way that her season has gone,” Doepking said following a doubleheader loss to Virginia Tech. “If we have any chance it’s going to be early in a count. We cannot go up there and be passive because she’s going to eat us alive late in counts.”

No. 2 Florida State (38-9-1, 26-5-1) enter this year’s tournament having won six ACC championships in a row. The Seminoles have qualified for the Women’s College World Series three times during that span.

Florida State swept a four-game series against Syracuse in mid-April, scoring 32 runs on the Orange. Florida State knocked 13 home runs after only hitting 18 in its previous 33 games. Despite two run-rule losses, Syracuse pushed Florida State into extra innings in the third game of that series, but ultimately fell 3-2.

While Florida State hasn’t been the consistent power-hitting team it’s been in years past, the Seminoles made up for it by relying on depth in their pitching rotation. Florida State’s Kathryn Sandercock and Caylan Arnold’s ERAs are both top-five in the ACC, at 1.15 and 1.84, respectively. But for Syracuse to end Florida State’s 18-game ACC Tournament win streak, Doepking believes the Orange’s top pitchers must match the consistency of Sandercock and Arnold.

“We didn’t come in here thinking that we’re going to put up seven, eight runs off this caliber pitching,” Doepking said following the series sweep. “For us to have a chance, our pitchers can’t put up seven and eight innings and expect our offense that’s struggled anyways to keep up with that.”

The post What to know about Syracuse and its opponents ahead of the ACC Tournament appeared first on The Daily Orange.