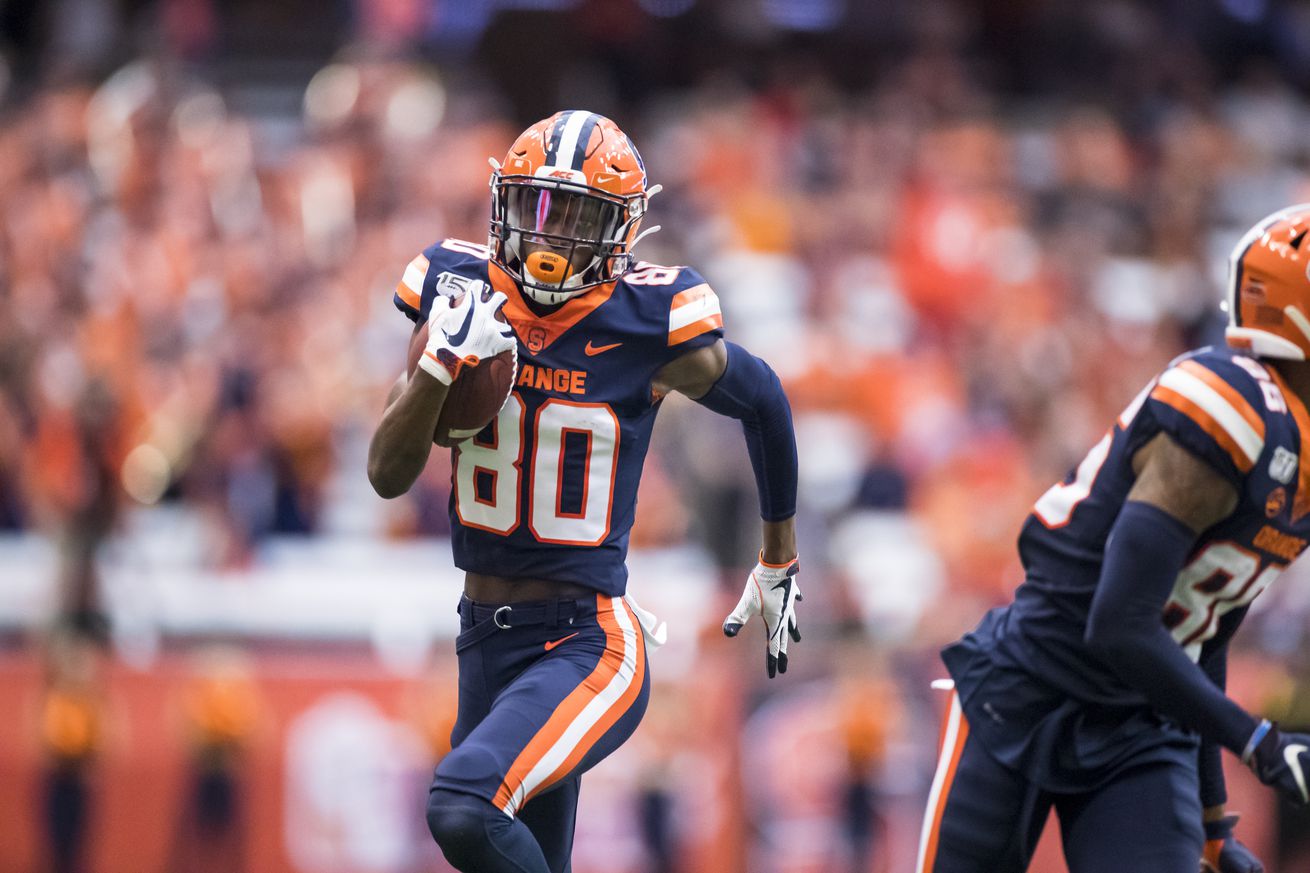 We’ll find out Monday for sure, but why not look ahead?

Since the season starts next week for the Syracuse Orange, it only seems right to get a look at a projected two-deep. Some huge caveats on this one, as there’s still many unknowns and Coach Babers has been very tight lipped about what’s going on in camp, both injury-wise and scheme-wise. Some of the player interviews have tipped some information off, but the unknowns are abound. Here’s our first stab at it:

Quarterback is a no-brainer, with Tommy DeVito at the helm until further notice. The real questions start at running back. There has been some question on the activity of Jarveon Howard and Abdul Adams, so that 1-2 punch may move down the charts if they opt out, in favor of Jawhar Jordan and Markenzy Pierre. Chris Elmore will be the fullback if we need him, but is listed on the chart as TE, since that’s what they did last year.

The receivers are pretty set for the starters. If healthy, Ed Hendrix and Taj Harris are our outside receivers, with Nykeim Johnson in the slot. Aaron Hackett will be the primary tight end, with Luke Benson (not listed) coming in for multiple TE sets.

The starting line shouldn’t be much of a surprise, sticking with what worked last year towards the tail end of the season. One change of note, since Chris Bleich is assumed to not be granted a waiver at this point, Patrick Davis is listed as the starter at right guard. Dakota Davis switched to left guard with the departure of Evan Adams and the addition of Bleich.

The defensive front starters should be cut and dry, with McKinley Williams in the middle and Kingsley Johnathan and Josh Black and the ends.

Here’s where things get weird.

I’ve given the “OR” tag to Mikel Jones and Tyrell Richards at the Will linebacker. Jones noted in the presser the other day that he’s been starting there, while Richards was the presumed incumbent at the new position. This is one to watch, as Jones is a talent that I’d like to see on the field, but so is Richards from what we’ve seen.

At the Mike, in the same interview, it was determined Geoff Cantin-Arku was the starter. The only thing is, I’m not seeing anyone to slot in behind him. There’s no real upperclassmen at middle linebacker, and Anwar Sparrow gets slotted in, since he’s the highest rated of the incoming freshmen at that spot.

Steve Linton and Lee Kpogba should be the options at the Sam, as per the spring depth chart.

Defensive backs, as mentioned the other day, will be a flexible mixed back of positions. Trill Williams and Ifeatu Melifonwu should be considered the starting cornerbacks, with Andre Cisco at boundary (strong) safety, Eric Coley at the rover and a free safety over the top. That FS was Neil Nunn and Aman Greenwood in the spring depth chart, but freshman Ben LaBrosse slots in there as well. If Trill shifts inside, that likely promotes Garrett Williams as the next corner up.

At kicker, Szmyt happens and James Williams looks to follow up on the Punter U moniker.