Deandre Kerr expected to endure more physical play heading into his sophomore year after finishing 2020 as Syracuse’s top scorer and being named to the ACC All-Freshman team.

“I knew teams would have a closer eye on me, rough me up a little bit more,” Kerr said.

So when Amferny Sinclair threw the ball in from midfield against Niagara on Sept. 6, Kerr knew it was going to be a difficult path to the goal. Circling around several Niagara defenders, Kerr quickly maneuvered down to the top of the box. It was an easy path from midfield to that point, but then three Purple Eagles defenders crashed in on Kerr in an attempt to stop his shots.

Kerr fought through each one of them, and was able to get a shot off. While his shot flew wide to the right side of the goal, it drew a corner kick for Syracuse.

“He’s an extremely exciting, dynamic player,” head coach Ian McIntyre said. “And if we can get him the ball in dangerous areas, I think he can cause some real problems for opponents.

Despite the second-year forward getting more attention from defenders, Kerr has still found early success this season. Because of his quickness, he recorded a game with 10 shots against Niagara and another game with two goals against Virginia in the first five games of the season. Kerr ended his first season as Syracuse’s leader in points, and he became the first freshman to score two goals in a game since 2016. But McIntyre said the coaching staff might’ve placed too much responsibility on Kerr’s shoulders during his freshman year.

As a forward, and with the type of long-ball, boom-or-bust offense that Syracuse has relied on early this year, Kerr has been the main target when the Orange generate offensive pressure. McIntyre knows Kerr is a mismatch for most defenders and can become a “handful” when isolated. That’s why in games such as the one against Georgetown, McIntyre wanted the offense to run through Kerr.

I knew teams would have defenders on me. It’s part of the game and it’s something that I have to deal with, something I’m willing to adjust to

Deandre Kerr, Syracuse forward on how defenses have given him more attention this season.

Four minutes into the game, the strategy was evident. SU was in transition, applying early pressure on Georgetown’s goalkeeper — a tactic McIntyre has stressed for Syracuse this season. A pass on the left wing found Kerr, who collected it with a quality first touch. As he looked up to chart a path out to the box, two defenders once again stood in his way. Kerr easily wove through the two Hoyas and sent a one-time shot down into the box.

Unfortunately for Kerr, none of the midfielders kept up with him, leaving the box open for the Georgetown goalkeeper to nonchalantly grab the ball and halt any SU momentum.

Before the season, McIntyre said he hoped the roster filled out a bit more to surround “dynamic” players like Kerr. Colin Biros transferred from Akron and immediately showcased his skills as a complimentary piece. He scored Syracuse’s first goal of the season in the 65th minute against Drexel. SU added Francesco Pagano — who scored 45 goals in high school — as a freshman from Fayetteville-Manlius High School. 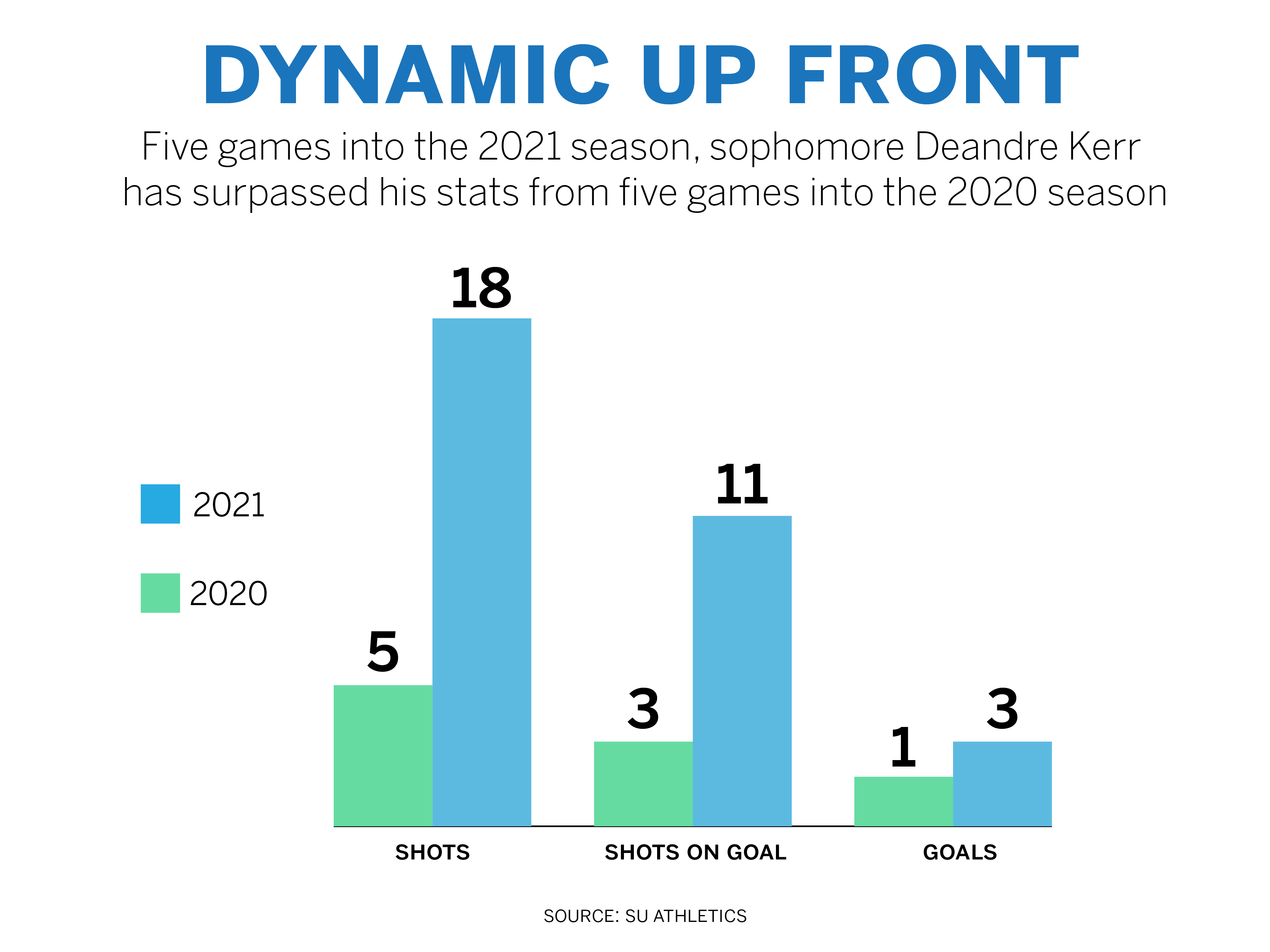 After the Georgetown game, McIntyre noted how exciting it was to see four new Orange players contribute to a win. Syracuse now has more depth at the defender and midfield positions, and the units have helped Kerr generate seven points, three goals and 11 shots on goal through just five games.

Kerr didn’t start in the Orange’s 3-0 loss against Penn State after suffering a lower-body injury during a collision in the season opener against Drexel. It was a small setback for the forward, who had spent the offseason rehabbing a previous injury. Over the summer, Kerr rebuilt his strength by working on getting inside the box more and shooting with each foot.

McIntyre and Kerr both want more goals inside the box. From headers to volleys to service passes, Kerr wanted to emphasize playing at a higher level near the goal.

“I knew teams would have defenders on me,” Kerr said. “It’s part of the game and it’s something that I have to deal with, something I’m willing to adjust to.”