Tucker Dordevic provided the rare highlights during Syracuse’s first 10-loss season in program history. Six-, seven- and nine-point performances carried the Orange’s four wins, and when he struggled to provide those numbers, the team did too.

After a career-high six goals against Stony Brook, Dordevic said he would return the following season, set to help spark SU’s attack with the return of Owen Hiltz, the discovery of Jackson Birtwistle and the addition of Joey Spallina.

But Dordevic entered the transfer portal on Monday morning, and head coach Gary Gait will now enter his second season without his leading goal-scorer.

Gait’s return to his alma mater hasn’t gone as planned. Hiltz’s injury derailed Syracuse’s attack before the season even started. The Orange were unable to score more than once in a quarter during eight of their losses. Their replacement plan for Drake Porter failed. And they displayed an overall inconsistency as their longest winning streak reached just two.

Now, with the loss of Dordevic, SU will miss another piece of the puzzle that could help it get back to the NCAA Championship. And without its main weapon, that seems unlikely.

The first step Gait took after becoming Syracuse’s women’s lacrosse head coach in 2007 was inviting each player into his office. Following a few simple questions, he asked the most important one: Are you here to win a national championship?

“If you want to win, you have to change the mindset and the culture right away. That’s what I did,” Gait said.

With Tucker Dordevic entering the transfer portal, Syracuse will have an even tougher task next season to fix this year’s misfortunes.

Gait said the team overachieved his first year as a women’s lacrosse coach, reaching the Final Four for the first time in program history. Fourteen years later, when Gait took over Syracuse men’s lacrosse, he said he didn’t ask the same question since the expectations of an NCAA title were already set. Instead, he wanted to improve the team’s chemistry, specifically within the attack.

“One of the things I want to bring to this program is to heighten the level of chemistry and take the program to the next level like I remember it being,” Gait said. “I’m thrilled to try and bring those plays back to the program and create a buzz around how Syracuse plays again.”

The buzz and chemistry was omnipresent in the Orange’s opening win over Holy Cross, as 16 of their 28 goals came from assists. But they had the second-toughest schedule this season, according to Lacrosse Reference, and were unable to match the country’s best programs. SU finished with 92 assists, tied for the 37th-most in the country, seven fewer than it had last season.

Gait was unable to fix the chemistry and said because of his fast transition from the women’s team to the men’s, he had relied on assistant coaches Pat March and Dave Pietramala with the offense and defense overall and let them do what they wanted.

“I was taking that opportunity to watch and learn,” Gait said. “Now I can evaluate and make decisions and get us working together a little bit better and hopefully put us in a better position.”

March and Pietramala were able to show what the Orange were capable of at their best, posting four goals in the fourth quarter while allowing just one to prevent a comeback from then-No. 11 Duke on March 26. After defeating the Blue Devils, SU didn’t win a matchup for the rest of the year. Notre Dame got rid of any momentum the Orange had, handing them their worst loss since 1977. 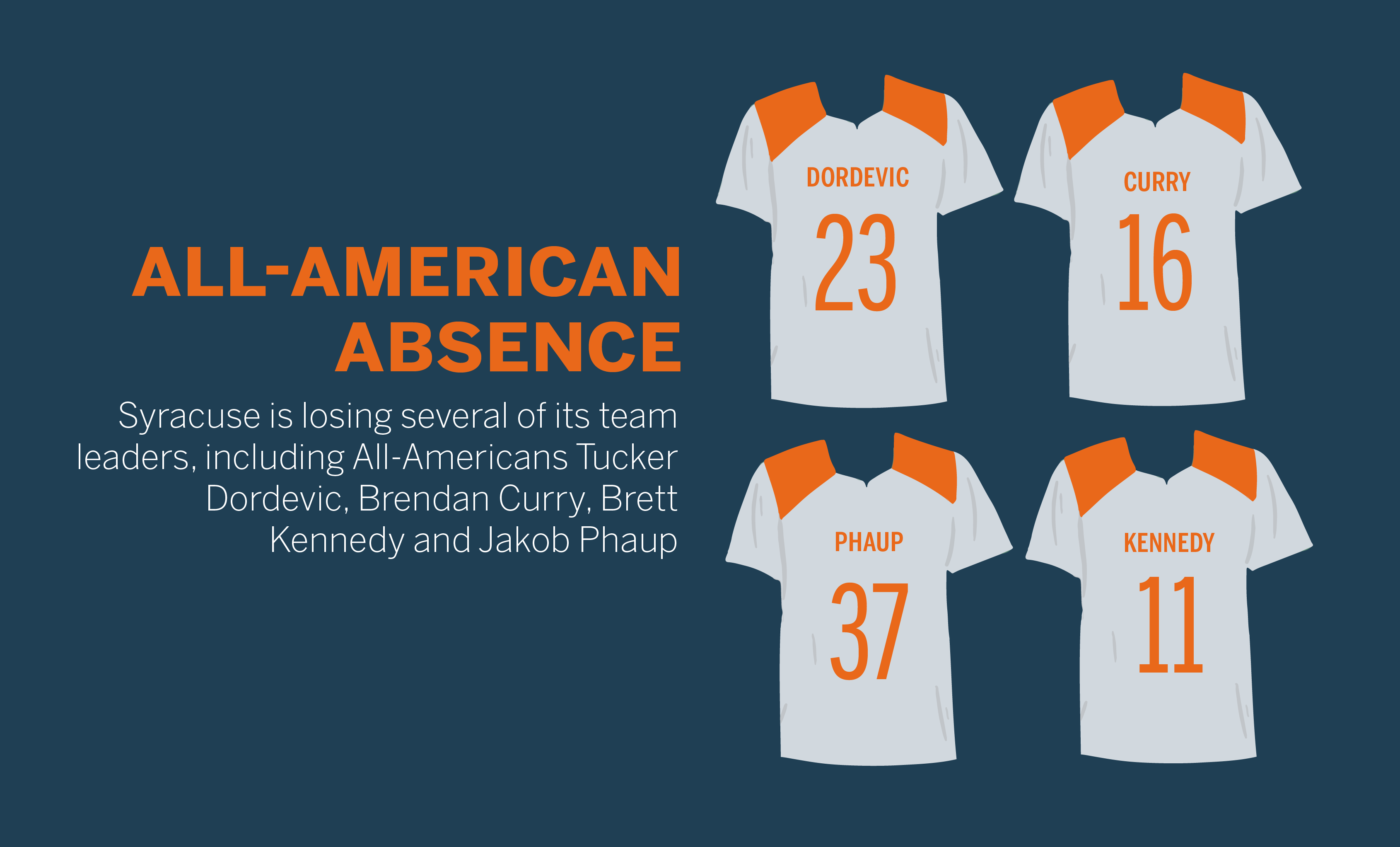 The Fighting Irish held Dordevic to two goals on 10 shots, keeping the entire SU attack scoreless in the first quarter. Without Brendan Curry or Dordevic able to get going, the Fighting Irish revealed how Pietramala’s defense could prevent a team’s best player (Pat Kavanagh) momentarily but couldn’t stop secondary scorers like Jake Taylor, who recorded a program-record eight goals.

The same issue resurfaced in SU’s losses to UAlbany when Adam Thistlethwaite, a freshman who’d never scored before, notched two goals, and North Carolina freshman Dewey Egan found the back of the net twice in the first quarter after only scoring three times prior the whole season.

The inability to stop opposing attacks also had to do with Syracuse’s inconsistent goaltending. The Orange have gone back and forth between Bobby Gavin and Harrison Thompson the whole year, unable to find a proper replacement for Porter as Gavin, who played more than Thompson this season, finished with the second-worst save percentage (42.2%) in the whole NCAA.

While Gavin and Thompson will fight for the starting spot again next year, the Orange will miss mainstays at almost every other position. Jakob Phaup took almost every faceoff this season, but he won’t return, along with Curry, Dordevic, Owen Seebold and Brett Kennedy. 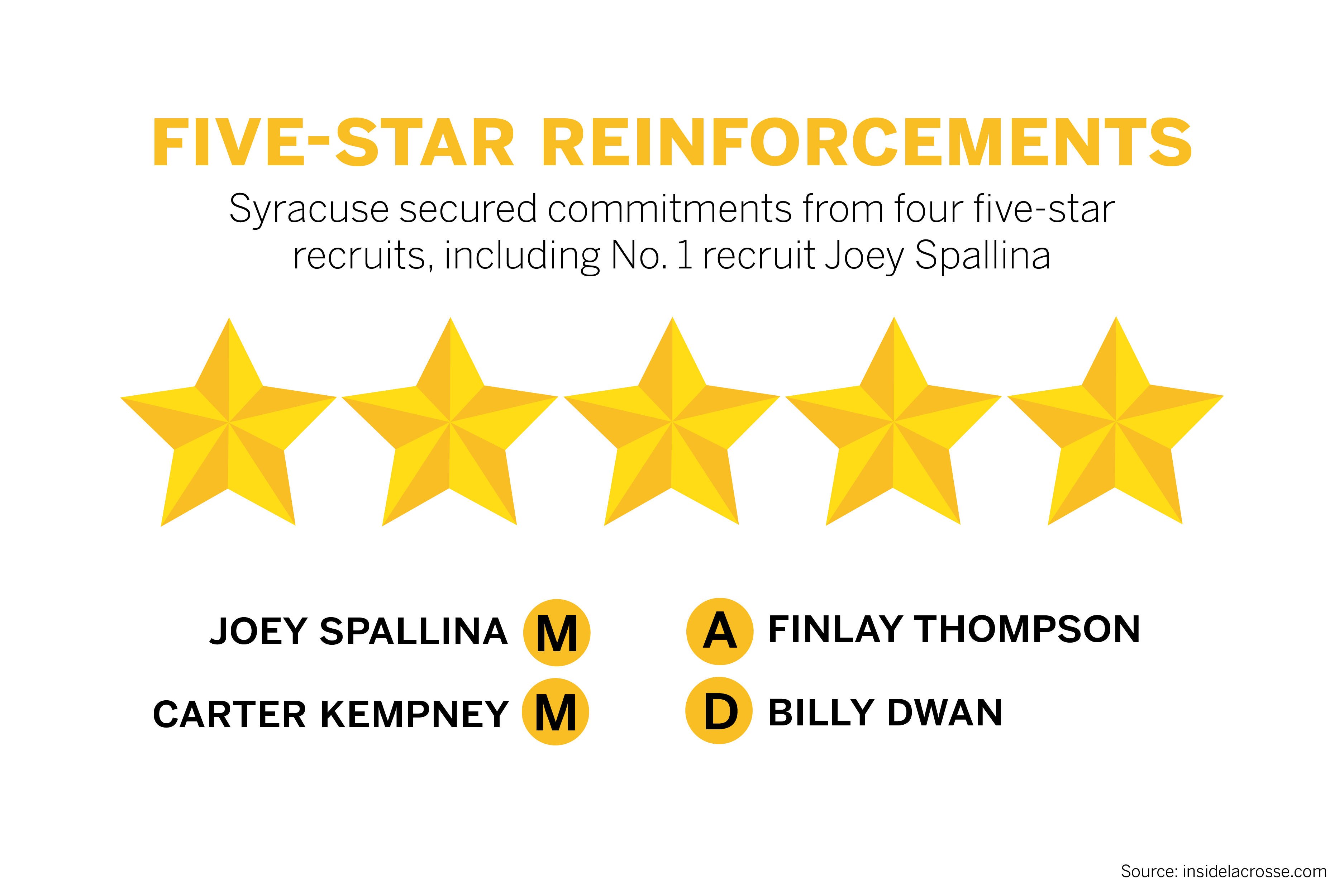 Gait and the Orange must now turn to their youth, particularly their foundation at the midfield position. After injuries to Lucas Quinn and Griffin Cook, SU properly replaced those players with Tyler Cordes, Matteo Corsi and Pete Fiorini. Later in the year, Birtwistle emerged as a threat as well, scoring 11 goals in the Orange’s final three games.

Next season, those players won’t just have to go in to provide an extra spark, they’ll need to be the ones igniting it. With the attack now in Hiltz’s hands, Syracuse’s secondary players will need to add even more goals. Spallina also needs to make an immediate impact, or the offense could just be like it was this year, unstable.

The key will be if Gait’s supposed changes in the offseason come to fruition. He was able to create a powerhouse with the women’s lacrosse team from the get-go, but now he’ll have a tougher task ahead of him to fill the gaps left by Dordevic and the rest of SU’s departures. Syracuse is far from competing for a national title again, but next year has to be a step forward instead of another one backwards.

Anish Vasudevan is an assistant sports editor at The Daily Orange, where his column appears occasionally. He can be reached at asvasude@syr.edu or on Twitter @anish_vasu.