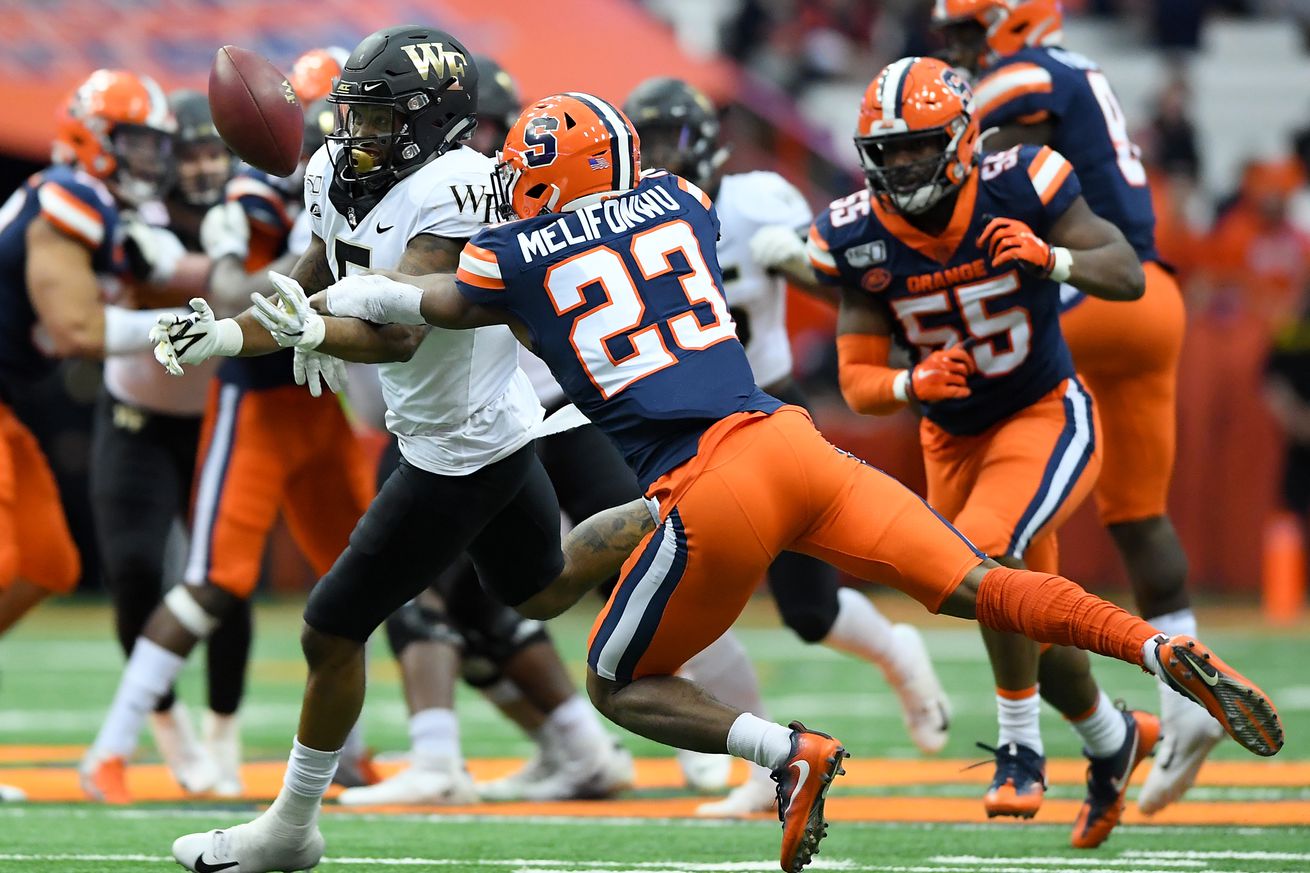 We usually do one of these win-loss projection pieces every January, following the ACC’s official schedule release for the Syracuse Orange and the rest of the conference. Earlier this year, we’d landed on a record of 6.33 wins and 5.67 losses for Syracuse over the course of a 12-game schedule. That was not a large margin of error.

A lot has occurred since then — including a brand new football schedule reflecting the conference-heavy construction of this coming season, should it happen. Instead of the customary eight ACC games plus four non-conference games, Syracuse will be playing 10 ACC games and one non-conference contest.

On Wednesday, we saw how conference schedules shook out around the ACC, and how Syracuse’s opponents changed a bit. Though we still don’t know who the 11th team on the slate will be, we took some guesses earlier on Thursday.

Rather than waiting for the dated schedule and non-conference opponent to be announced, we’re just going to look at the 10 games we know and assess win probabilities for each game. Adding up those totals will give us a sense of how the season might turn out. We’ve been wrong before, so take this with a grain of salt. More power to you for picking us to go 15-0 despite not being able to play that many games this year.

Boston College Eagles: Getting this one at home could give you nightmares about last season’s drubbing, and apologies in advance should that occur. But if the game’s early in the year, there’s a chance Syracuse could catch the Eagles still warming up with a new coaching staff and system on both sides of the ball. Despite the conference’s top offensive line, QB remains a question, and that could be the difference-maker here. I’ll still opt for a slight SU advantage, especially at home now. Win likelihood: 55%

Duke Blue Devils: Don’t think Duke’s really gotten better compared to last year, and we were able to roll past the Blue Devils on the road in 2019. With so many questions on offense once again, there’s a chance that they can’t keep up once again. Will say the defense is much better than Syracuse’s right now, however. Win likelihood: 60%

Georgia Tech Yellow Jackets: As mentioned previously, Tech’s still in the middle of shaking off their old option system in year two of Geoff Collins, and the offensive personnel still doesn’t have enough to run a modern attack. The defense is likely to be middle of the pack, but could lag with a weaker defensive line (which they’re projected to have). Any team that can’t pressure Tommy DeVito is at some sort of disadvantage against ‘Cuse. Win likelihood: 63%

N.C. State Wolfpack: Another team with quarterback questions, and really, questions across the board. After some promising seasons under Dave Doeren, the Pack have definitely struggled of late and look to be in for another rough patch in 2020. Keeping this game at home was a good thing, and could ultimately be part of what helps Syracuse secure a W. Win likelihood: 60%

Wake Forest Demon Deacons: We return to the scene of last year’s Orange win, but with Sam Hartman now the full-time starting QB and star wide receiver Sage Surratt back after missing last year’s matchup. The Deacons are in pretty good shape on offense, and have one of the conference’s top edge rushers in Carlos Basham. This is absolutely the toughest home game for SU. Win likelihood: 40%

Clemson Tigers: I’m not certain Death Valley will have zero fans. But even if they do, Clemson’s too talented this season to drop the game against Syracuse. Trevor Lawrence and Travis Etienne are very likely to play, so that should be enough. Win likelihood: 5%

Louisville Cardinals: There was a possibility that getting UL at home when the season was originally scheduled made a win more likely than it would’ve been otherwise. With that ship sailed, though, we now face a very good Cards squad with most of the players that terrorized us last year back in the fold. Don’t love our chances here. Win likelihood: 25%

North Carolina Tar Heels: As mentioned, SU got a couple rough road draws, and one of them is UNC, who’s resurgent under Mack Brown and could’ve been a Coastal favorite this season. They’re loaded with offensive talent (Sam Howell is just the tip of the iceberg) and the defense isn’t half-bad either. Not the year we wanted to play the Heels. Win likelihood: 20%

Notre Dame Fighting Irish: And here’s the other worst-case new addition. The Irish are a potential top-10 team and are very likely to beat us based on that fact alone. Ian Book is a capable dual-threat QB who’s likely to give these Orange linebackers fits, and while there are questions on defense, Notre Dame always comes stockpiled with plenty of blue-chippers to fix the problem. Win likelihood: 10%

Pittsburgh Panthers: If there’s one potential win on this road schedule, it could be Pitt. However, even that seems less-than-likely. Other than Kenny Pickett, the offense replaces a lot and has numerous question marks. The saving grace (for them) is that this defense is actually looking like a Pat Narduzzi group, and this is one of the better front-fours in the country. Yikes. Win likelihood: 35%

Honestly, that’s not great. Even the “easier” home slate features mostly toss-ups and the road schedule now has at least three sure losses (more likely, it’s four). We don’t necessarily know what this season will look like, and maybe some weird stuff starts to happen. However, as it stands right now, SU’s going to have to convert all of these toss-ups — and/or pull a major upset to wind up with a respectable record.

What’s your take, though? Am I too high on this team? Too low? Share your own projections below.