In elementary school, he accompanied his father to Chicago high school games where the latter worked part-time as a medical standby for the school district. Elmore took initiative — he led his younger siblings out of their father’s off-yellow Cadillac and in and out of Gately Park’s stadium as they carried medical supply bags and coolers.

Elmore then rounded up other fans’ kids to play football on the patch of grass outside the stadium during games. Elmore was the group’s leader, said Kennard Johnson, who worked as stadium security at the time.

As the group played tackle football, driving one another into the ground, Elmore proved he was the “ultimate tough kid,” said Keith Brookshire, one of many Chicago high school coaches who noticed Elmore playing on the makeshift field years ago.

His father, Clinton Elmore, said another high school coach pointed at the kids playing on the little patch of grass as he passed by and told his players that if they worked that hard, they could win a state title.

Behind it all was Elmore, the face of the group.

“Coaches filtered around me and were just like, ‘You’re a guy who knows football,’” Elmore said of his experience leading the group. “That leadership role, it just came to me. It just naturally came to me.”

Elmore became the face of his high school team — and the school — at Wendell Phillips (Illinois) Academy, and he’s stepped into a similar role with Syracuse University football. Head coach Dino Babers said last year that the Orange wouldn’t have finished the season had Elmore not selflessly agreed to shift from fullback and tight end to offensive line.

But in his lifetime of leadership roles, his current has been the most unconventional. Elmore used his extra year of eligibility to come back and lead SU once more following a 1-10 season in 2020. He holds a significant front-facing role, typically uncommon for a fullback. He’s an unlikely leader.

“When you want to say like, what’s a Philips Wildcat? Or if you were to say, what’s a Syracuse Orange? Chris would be one of those guys you would put at the face of it,” said Troy McAllister, former Phillips Academy head coach. “He’s the kind of person you put at the face of a program.”

Elmore was the one who “got the guys right” at Phillips, said his younger brother, Craig Elmore, who played alongside him in high school. During Elmore’s sophomore year, there was a junior offensive lineman who hated going to the weight room, so coaches paired him with Elmore.

The two went to lift together everyday, and by the end of the year, the lineman was squatting 400 pounds, former Phillips Academy offensive coordinator Joe Winslow said. The pair went head-to-head at practice too, Elmore playing defensive line. With Elmore’s guidance, the offensive lineman became one of the team’s best.

“It was safe to say Chris became his motivation,” Winslow said.

Off the field, Elmore was voted the most likely to become famous by his classmates at the end of his senior year, Clinton said. It wasn’t because he was the most vocal, but because he set an example that others at the school followed. He became “the face of the school,” according to Winslow, and an unofficial leader among students who weren’t even on the football team.

Elmore’s not intentionally trying to lead the pack, many close to him said, but his humility and personableness carry over to those around him, both on and off the football field. That was apparent when his best friend, Carliysia Clark, died in a fire during his sophomore year of high school. Elmore dedicated his football career to her, and she became his inspiration and motivation to push forward with his own goals.

While he was grieving Clark’s death, Elmore consoled others who were close to her. Daurice Lee, who was Clark’s boyfriend and one of Elmore’s close friends, said Elmore frequently checked on his mental health. Winslow said he remembers Elmore consoling a student who’s Clark’s death was particularly hard on.

Elmore rallied his teammates, as well as the entire school, to honor Clark. He took the negative and tried to make it positive, Clinton said. Others followed his lead.

Elmore’s been a leader all his life. In middle school, the coaching staff watched a grinning Elmore “running through people.” They were perplexed as he knocked kids down and then took the time to help them back up.

“We came to realize, that’s just the person he is,” Winslow said.

Clinton said he remembers a fan in the stands holding up a sign that read “Elmore Fan Club, Est. 2017”clo during his son’s freshman year at Syracuse. Elmore was a rookie with limited on-field experience at the time, but those close to him weren’t surprised that he’d already drawn support.

“He just has that kind of magnetism and that energy that supersedes who he is,” Brookshire said.

At Syracuse, Elmore shared his personal experience as a Black man growing up in Chicago at April’s ‘Black Athletes Lives Matter’ march. He talked about experiencing police brutality at an early age and mentioned that two people close to him were killed by the police. Lee said he wasn’t shocked that Elmore decided to share that message and speak on behalf of his community.

Elmore was part of the first Chicago public school football team to win the state championship in 2016, but the work he does in his local community stretches beyond football fundamentals and drills. Since high school, he’s been mentoring young adults and helping them stay off the streets, Clinton said.

His father created a list of coaches who want Elmore to talk to their players when he returns home to the Chicago area. Elmore’s well known in his community, even among coaches who never trained him.

Elmore has worked with Rashad McKinnie — his cousin’s husband — at Youth Basketball Mentorship since 2019. As part of the support system, Elmore mentors those younger than him, including McKinnie’s son — a high school sophomore and basketball player.

Elmore also has a mentor of his own: Keifer Sykes, an NBA player who’s also from the Southside Chicago. They discuss how to carry themselves as athletes and people as well as how to give back to the community, Sykes said.

Elmore and YBM hope to set up more camps in the near future to expand their reach, although the pandemic has made this difficult. They’re working to change the narrative about Chicago so that there isn’t just one Chris Elmore, but 20 to 30, McKinnie said. Elmore serves as a leader and provides a younger perspective — he’s there to talk to kids who are experiencing hardship.

“Touch one, and that one might touch one,” Clinton added of what he tells his son. “But you can make a difference, and he’s so into doing this.”

It’s very uncommon to find a player as selfless as him — most players his age are only interested in their own ways, McKinnie said. 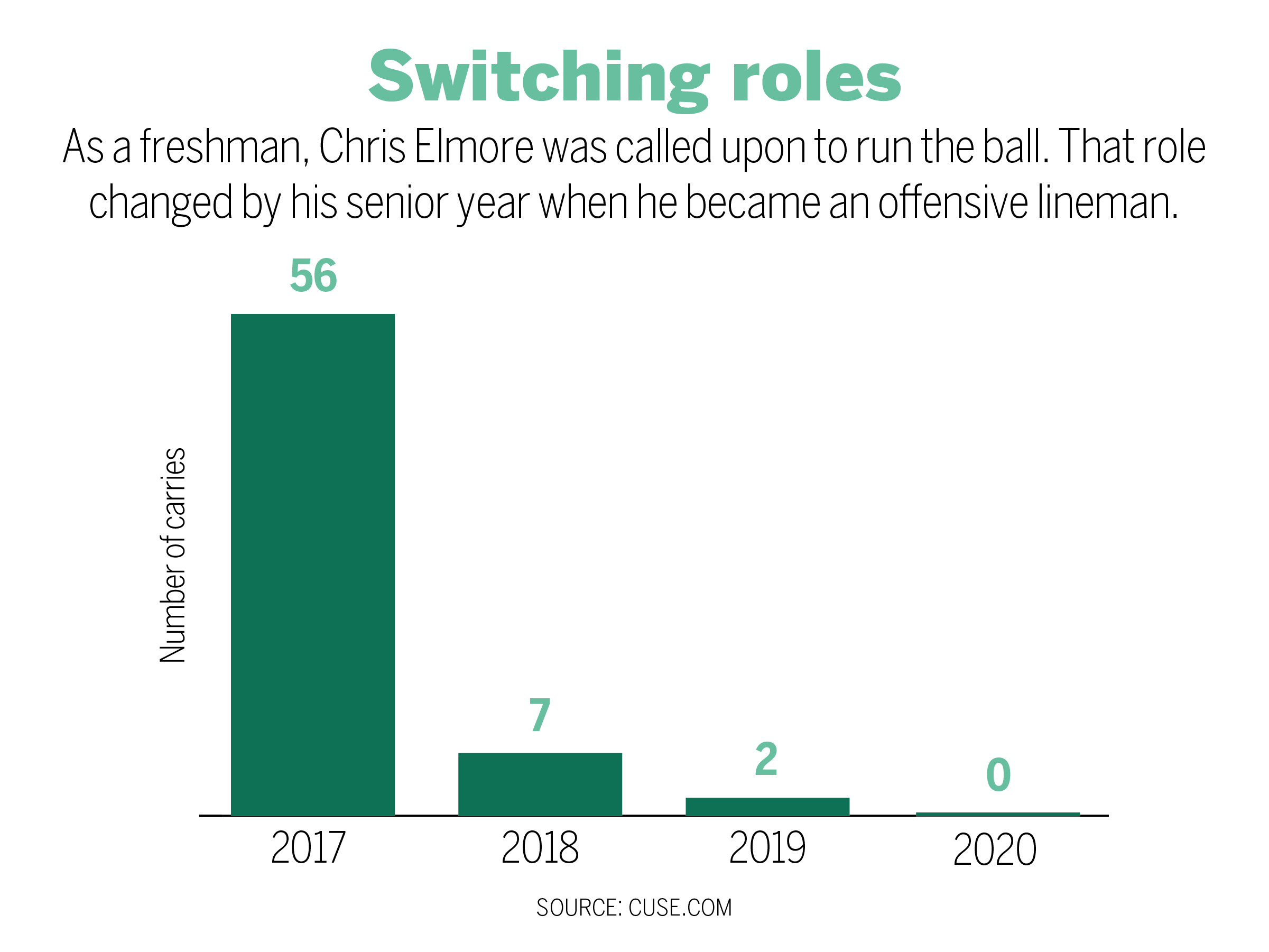 In fifth or sixth grade, Elmore shifted from fullback to middle linebacker and has continued to develop since. Elmore said he’s always loved football so much that he never cared where he lined up.

During his freshman year of high school, he filled in at quarterback when the team needed him, taking snaps from the wildcat formation and trampling guys with quarterback dives and sneaks. Even then, Elmore had the fundamentals necessary to be a strong overall player, Lee said.

“There’s no excuses,” McAllister said. “Having a guy like Chris do what he does — it really does take away all excuses from other people.”

Elmore was the first to mention “unfinished business” after a 1-10 season in 2020, Clinton said. Teammates adopted that mindset, too. Elmore earned respect from his teammates with big plays, but also from being a goofy, warm-hearted person, Craig said. They call him “Rhino” after former coach Sean Lewis made up the nickname when Elmore blocked now-NFL player Zaire Franklin during the former’s freshman year.

The fullback has one more year to build his resume before he tries to fulfill his NFL dreams. Those close to him think he has a real shot at getting drafted, not only because of his skillset, but also because of the mindset and personality he brings into the locker room.

On the field, Elmore is like a chameleon, McKinnie said. Elmore is one of the guys who will go ask the coach whether there’s anything else he can do, Elmore’s brother Craig said. He’ll try to “do it all” if you let him, Winslow said. Clinton emphasized that Elmore is not a “football position player,” he’s simply a “football player.”

Like his leadership, which Elmore said comes easily for him, versatility “just came naturally.” That mentality is contagious because once Elmore says he’s willing to do anything or play anywhere on the field for the team’s betterment, others follow his lead.

During the offseason of Elmore’s senior year, defensive line coach Dana Robinson remembers seeing Elmore in a baseball uniform. He had limited prior experience playing baseball, and the hat didn’t really fit over Elmore’s dreadlocks anyway, Winslow said. He had run track during the offseasons of his first three years of high school, but Elmore was ready to change it up, and the baseball team was short on players.

But as Robinson watched Elmore walk out of the locker room in a baseball uniform that day, a handful of other senior football players in baseball uniforms followed. Not only had Elmore joined, but he’d recruited his teammates, too.