DAYTON, Ohio — Tyrese Rice brought Boeheim’s Army within two points of securing another Elam Ending comeback victory with a floater, this time against Florida TNT. Florida TNT gained possession, but a fumble by Kenny Boynton opened an opportunity for Rice to steal. He said that throughout the game, Boynton had the same move: a lot of hesitation, then go. All Rice was thinking as the Florida TNT guard carried the ball up was that Boynton had to switch up his move.

While he guessed a crossover move, Boynton went through his legs. Rice, however, stuck his hand out, hoping to jar the ball loose. He swiped the ball from Florida TNT, pivoted and ran toward the net. The roar of the crowd crescendoed as he leaped up and laid in a final basket, sending Boeheim’s Army to its first championship game.

“You prepare yourself for this stuff. This is what you work out for. This is why you practice,” Rice said.

“He’s a killer,” DeAndre Kane said of Rice. “He’s always been that guy that can take over a game. He keeps the confidence going with guys.”

Three members of the inaugural Boeheim’s Army team — Kevin Belbey, Ryan Blackwell and Eric Devendorf  — remain seven years after its inception. Belbey, BA’s general manager, took a new approach to the 2021 TBT: win now. Six years with Blackwell as the head coach and Devendorf manning the helm on the court produced one semifinal bid and deep tournament runs. But without a championship, and without $1 million for the Syracuse alumni team, Belbey knew something needed to change.

After discontinuation of Overseas Elite, the winners of TBT from 2015-18, Belbey added four new players from Overseas Elite to their team to bolster BA’s depth and solidify the play at the guard position. One of those players is Rice, an undersized guard who’s four years older than head coach Jeremy Pope.

“Just the way he listens to me, he respects me, just lets you know how much of a professional he is,” Pope said.

In its quarterfinal matchup against the AfterShocks, Florida TNT utilized its transition offense to score 10 fast break points. But after finding a double-digit cushion once again, this time against Boeheim’s Army, the No. 5 seed was slow to get back, allowing Chris McCullough and Kane to quickly make their way down to the other basket. Kane settled in the left corner and motioned for the ball. McCullough briefly looked, drawing his defender one step away from the driving forward. 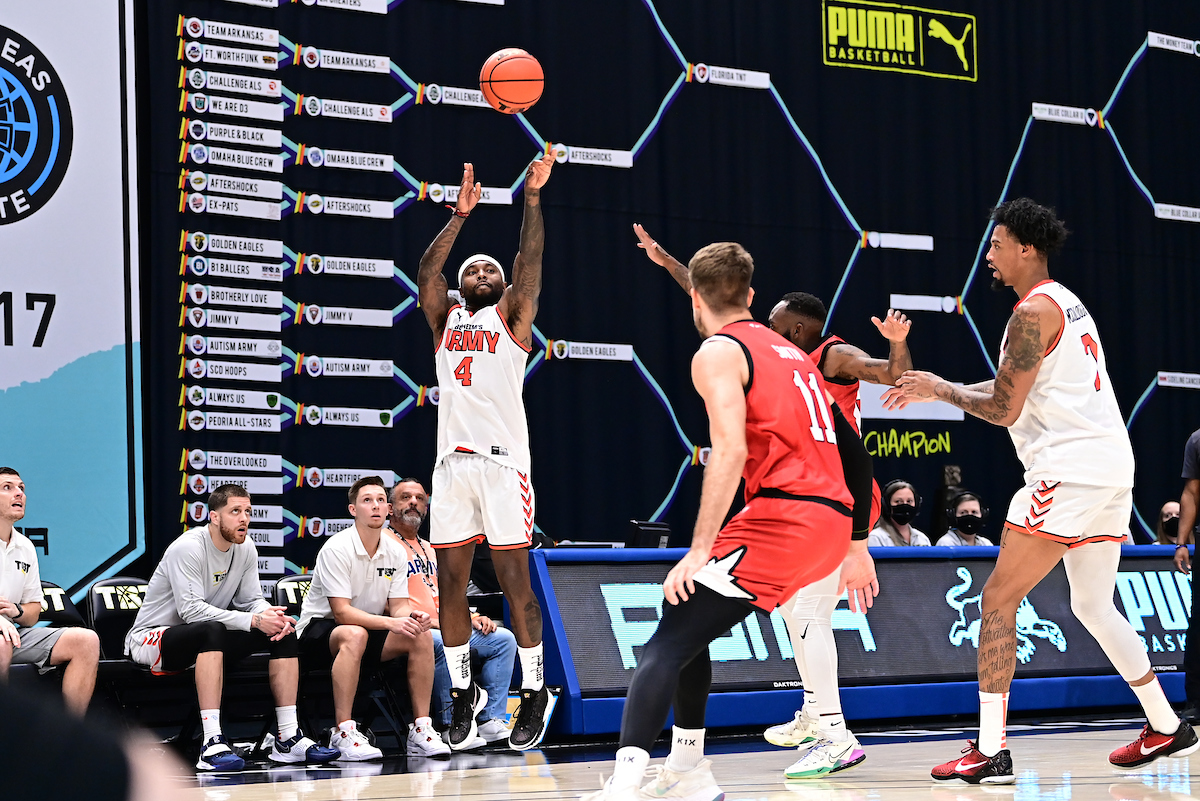 The ensuing layup catalyzed a 10-0 run that brought Boeheim’s Army within one point of Florida TNT as the final seconds of the first quarter expired. After a pull up 3-pointer from Rice, the new point guard found a crashing McCullough in the paint, dished the ball in and watched as he glided over his defender to get the finger roll in.

Boeheim’s Army found themselves in a deficit seconds after Florida TNT won the opening tip and Chris Warren buried his first of three 3-pointers. To combat the fast-paced play from the No. 5 seed, Boeheim’s Army tried their luck from long range. After finishing 6-for-20 from deep in their quarterfinals win over the Golden Eagles, it took Boeheim’s Army until 1:19 left in the first quarter for their first make.

The misses from deep continued, mirroring a trend first seen in their quarterfinals game, a trend that Pope said he wasn’t too concerned about. Pope said he has been preaching “high quality looks” from his team. The team doesn’t look at games in terms of makes or misses, he said, rather whether or not the shot was a good look. And during breaks, he’d tell his team to keep playing basketball and eventually those shots would fall.

“We just kept at it. Despite the percentage, we got the ones that mattered,” Pope said.

With the Elam Ending score set at 66, D.J. Kennedy gathered an uncontested rebound after Warren misfired a 3-pointer from the top of the key and sent a strong chest pass up to Rice. Instead of driving, he pulled up from deep and swished through Boeheim’s Army’s fifth point of the untimed period.

On the next possession, he got a finger roll to fall, tying the game at 58. Then, with Boeheim’s Army shooting just over 20% from deep, Keifer Sykes stole the ball from Florida TNT. He gave it to Rice, who sat a few feet behind the three-point line, in transition.

When Syracuse fans realized that a make would bring the team five points from a win with a three-point advantage over Florida TNT, BA’s fans rose to their feet. Once the ball found the bottom of the net, they erupted.

Pope said after the team’s quarterfinal win against the Golden Eagles that he never doubted his team. With a similar path into the Elam Ending on against Florida TNT, Pope once again relied on his starters, and on Rice’s experience, to take over and send them to their first championship game in team history.

“Even though they had us a couple times where they could’ve broken the game away … Tyrese was one of the main guys on the bench (saying) ‘let’s go, let’s go,’” Kane said.

Boeheim’s Army finished 6-for-29 from deep, which Kane scoffed at when looking at the stat sheet after the game. The No. 3 seed made 39.7% of shots from the field. But Rice nailed half of his attempts and saved two of his three long-range makes for the Elam Ending. His first 3-pointer came near the end of the second quarter. Despite plenty of space inside the outer arc, Rice pulled up. Florida TNT’s Marc-Eddy Norelia crouched far enough away to give the veteran room to shoot. The make trimmed the deficit to three points.

On the next possession, Rice found McCullough rolling to the basket down the lane after an off-ball screen. Rice fired it into the forward, who finished the play — one of seven assists from Rice — and brought Boeheim’s Army within one point. The basket capped off a 10-0 run to end the first half.

“Coaches basically put a lot of trust in Tyrese … he’s the head coach on the court,” Kane said.