Tucker Dordevic knelt in front of the Kraus-Simmons Trophy just outside of the field of play after receiving a delay of game penalty in the third period.

He lifted his helmet, resting it on his forehead as Hobart took advantage of the man-up opportunity, cutting the Orange’s lead to two. Once his 30 seconds were over, Dordevic returned to the field as Jakob Phaup ran up to the X, settling in his usual spot on the right side.

Phaup won the faceoff, and while the ball circled around the left side, Dordevic motioned Griffin Cook to set a screen for him. The duo perfectly timed the play, with Cook creating just enough separation for Dordevic to emerge wide-open as Brendan Curry curled to the right side of the field. Dordevic immediately launched the ball off a pass from Curry, finding the top right corner of the net to maintain SU’s lead.

“If you’re not defending those two great players with six people, they’re going to score goals,” Hobart’s head coach Greg Raymond said about Dordevic and Curry postgame. “They both had their two best games.”

Last season, Syracuse and Hobart were unable to play their battle for the Kraus-Simmons Trophy, the first time since 1961 that the two teams didn’t face off within a single year. On Sunday, the Orange hoisted the trophy for the eighth straight time, defeating the Statesmen 18-16. Dordevic matched the five goals he posted against Hobart two years ago, and Curry aided him with five scores on his own.

Hobart took an early 2-0 lead as Syracuse struggled to establish its attack from behind the cage in the first period. Dordevic or Owen Seebold tried to facilitate the offense, but neither were successful as Seebold fell to the ground before Dordevic had the ball knocked out of his stick on the same possession.

Curry got on the board first for SU after Phaup won his first battle at the faceoff X. Curry, who has struggled this season with the 16th-best shooting percentage on the team, found the back of the net from 6 yards out off a pass from Pete Fiorini. He scored on his own three minutes later, running down the left side of the field before shooting with his left hand.

Dordevic stayed quiet during the first period, but SU was able to get him open at the beginning of the second period with a screen from Lucas Quinn. And following a defensive mishap from the Statesmen, Dordevic was left wide-open on the right side of the field, sending a bouncing left-handed shot into the back of the net to give the Orange a 6-3 lead.

But the Statesmen quickly answered back, capitalizing on Syracuse’s defensive mistakes to tie the game at six. Another man-up opportunity allowed Hobart to tie the game again later in the half, but Dordevic was left unmarked again as two defenders jumped onto Cook.

With a left-handed strike, Dordevic scored his fourth goal of the second period, giving Syracuse an 8-7 lead. And following a score from Mikey Berkman, Curry scored his third goal, coming off a screen from Cook that left him with an open strike from 12 yards out.

“We like to set picks for one another, especially with the short sticks on the other poles,” Dordevic said. “So we set a good pick, and it worked.”

At the start of the second half, Curry sent an underhand shot that went just by the right post. Dordevic found the back of the net a few possessions later, but after he missed high, the Statesmen brought themselves back into the game with two straight goals. 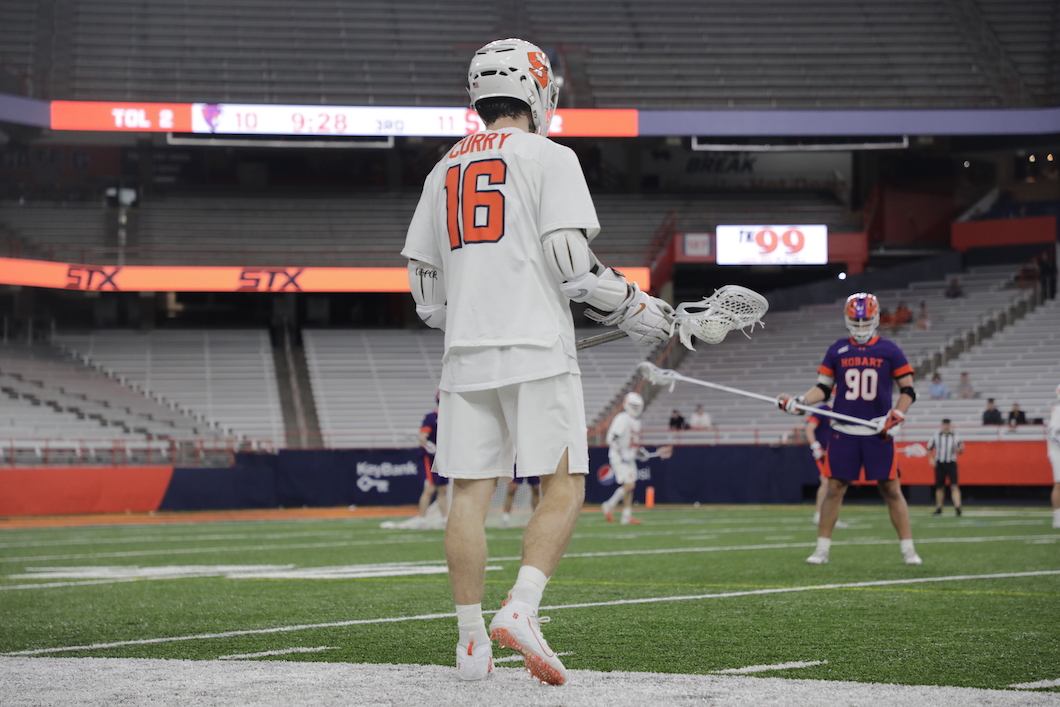 But like he had done countless times already on Sunday, Dordevic took control of the attack and extended Syracuse’s lead. With nine minutes left in the third period, Dordevic ran down the right side of the field, finding Seebold for a score on the left as he approached the crease.

Curry got back on the board four minutes later, charging down the center of the field off of a quick screen from Dordevic. He raised his stick high with his right hand, sending a bullet to the back of the net from 15 yards out.

Hobart continued to threaten the Orange’s lead at the start of the fourth period, going on a 4-2 run to make it a one-score game. Curry tried to give SU its momentum back, shooting again from the middle, but goalie Loukas Sotiropoulos easily caught his attempt.

With three minutes left in the game, Curry flipped the ball to Dordevic on the left side, allowing him to wait at the edge of the field while Syracuse tried to run down a chunk of the clock. He eventually curled to the front of the cage, sending an underhand shot that hit the left post.

Curry said the Statesmen moved into a zone defense during the final frame, something that the American players from SU aren’t used to because of their lack of box lacrosse background. “We didn’t see a zone for most of our life,” Curry said.

But in the final 15 seconds, Curry took the ball in Dordevic’s position at the right side of the field. As the Statesmen left the cage empty, Curry worked alone against a double team, sending the final dagger into the back of the net.

“With a one-goal lead with a couple seconds left I was going to get doubled anyways, so if I had the angle, I might as well put it in,” Curry said.