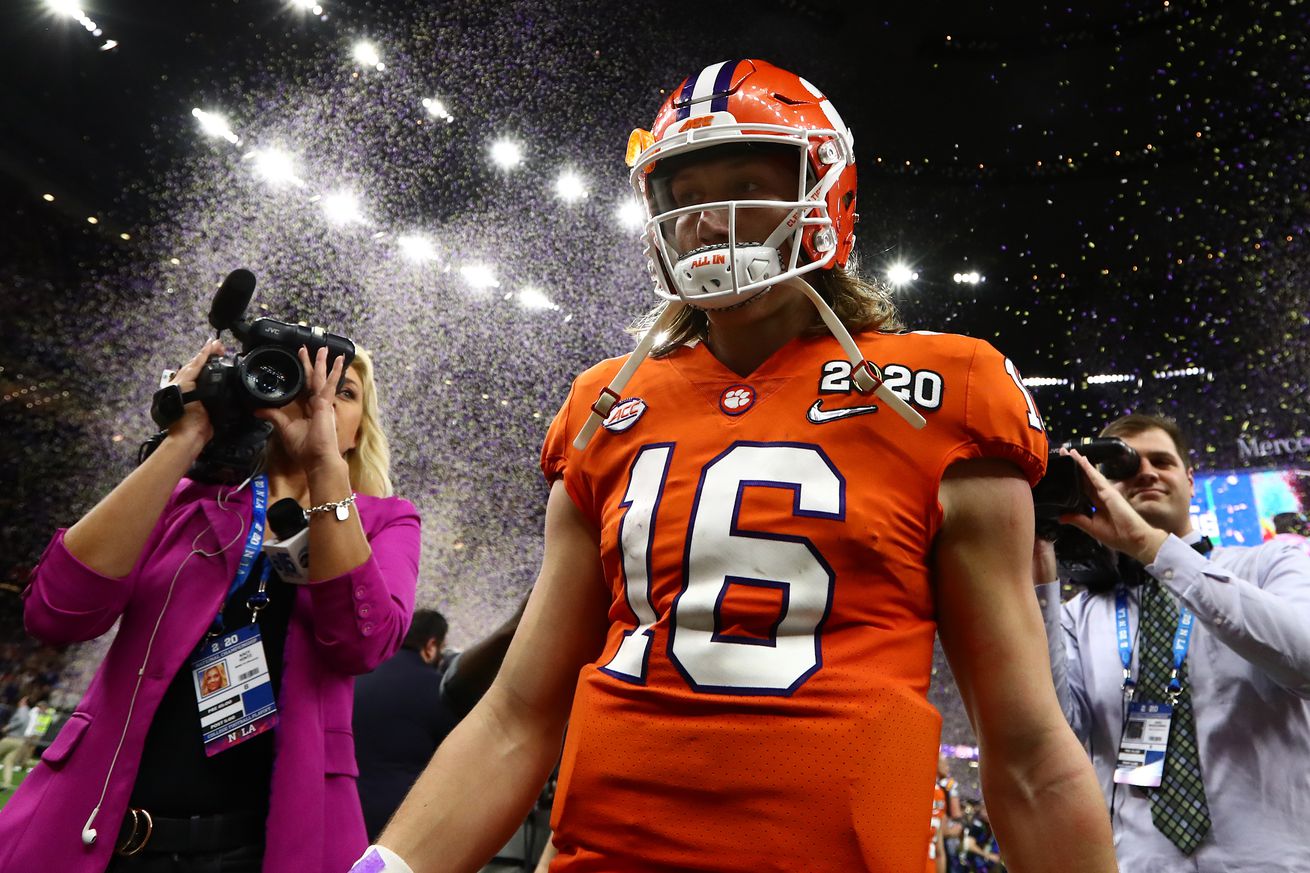 Who are the conference’s top players for this coming season (assuming it happens)?

While the Syracuse Orange are you favorite football team in the ACC, there are 14 other programs in the league as well this year. So it’s worth at least knowing a little about them, and who their best players are.

John ranked the best players across the conference’s position groups all summer, but he’s not the only person that writes here. So we opened things up to the full football staff to see who everyone thought were the league’s top players. Not included here are players that have announced they’re sitting out.

Will also note in advance that no Syracuse players made our “first team,” but a couple like Andre Szmyt and Andre Cisco just missed. As you figured, we’re #disloyalidiots.

One of a handful of unanimous picks, Lawrence aims to put up Heisman-type numbers yet again for a Clemson team vying for another national title.

Etienne didn’t even have to play the second half in many Clemson games, yet still finished with over 1,600 yards rushing (on just over 200 attempts). Meanwhile, Hawkins actually averaged more yards per game (117 vs. 108) while leading the way for a resurgent Louisville run game.

Last year, Atwell led the league in receiving yards (1,276) and was just one touchdown off from the most receiving touchdowns as well (he has 12). Newsome didn’t have the same eye-popping numbers as one part of UNC’s two-headed monster at wideout (with Dyami Brown), but QB Sam Howell’s numbers are likely to keep improving, so Newsome’s should too.

Rodgers has a bigger lift ahead of him this season with Justyn Ross out, but that could mean a statistical breakout for the now unquestioned No. 1 pass-catcher on the Tigers.

There was some variation on the line, to an extent, but the most consistent themes were selections for Notre Dame and Boston College players. Eichenburg, a potential All-American was a popular choice, as was his teammate Banks, and BC’s Zion Johnson.

Without pass rushing extraordinaire Gregory Rousseau (Miami) in the mix this year, Basham and Rumph take center stage. Basham was a surprising return for the Deacs after a season in which he collected 18 tackles for loss, and he’ll now lead a rebuilding Wake defense. Rumph (13.5 tackles for loss last year) should be the top player for a Duke defense that’s likely to be carrying more weight than normal in Durham.

Provided Wilson stays healthy this year, he should see quite a bit of improvement over last year’s 8.5 TFLs, and could be an All-American contender. Without Pitt’s Jalen Twyman, State’s McNeil gets the other spot. He recorded 7.5 TFLs last season and is one of a handful or bright spots for this Pack defense.

Ashby and Surratt were No. 1 and 2 in tackles in the ACC last year. And while that’s not the most important thing, both players have differentiated themselves as playmakers for their respective defenses. Ashby, in particular, tallied 17 TFLs last year too, while Surratt had 15.

Bright “only” wound up with nine stops behind the line, but is clearly one of Pitt’s more dynamic defenders and could really be let loose this year.

Without Caleb Farley, who will be sitting out to prepare for the NFL Draft, Waller becomes the Hokies’ (and the ACC’s) top CB. He defended 13 passes last year (fifth in the league), and picked off three. Samuel had 15 defended passes in two fewer games, but just one pick.

Hamilton is another potential All-American for the Irish after a sophomore season where he defended 10 passes and largely shut down deep throws for opponents. Nasirildeen’s counting stats didn’t necessarily wow last year, but the coaching change could mean a major step forward and a larger emphasis on big plays.

Szmyt missed the first team by a vote, though Sciba was the more accurate kicker last year after hitting 24 of 25 field goals (his only miss was against the Orange). Really, picking between the two is splitting hairs.

Philyaw-Johnson took back two kickoffs on just 17 tries last year, and averaged over 32 yards per return. That’s some efficient production, and a game-changer on special teams.

Hate these picks? Want us fired for not picking Syracuse players to the first-team? Share your gripes below.