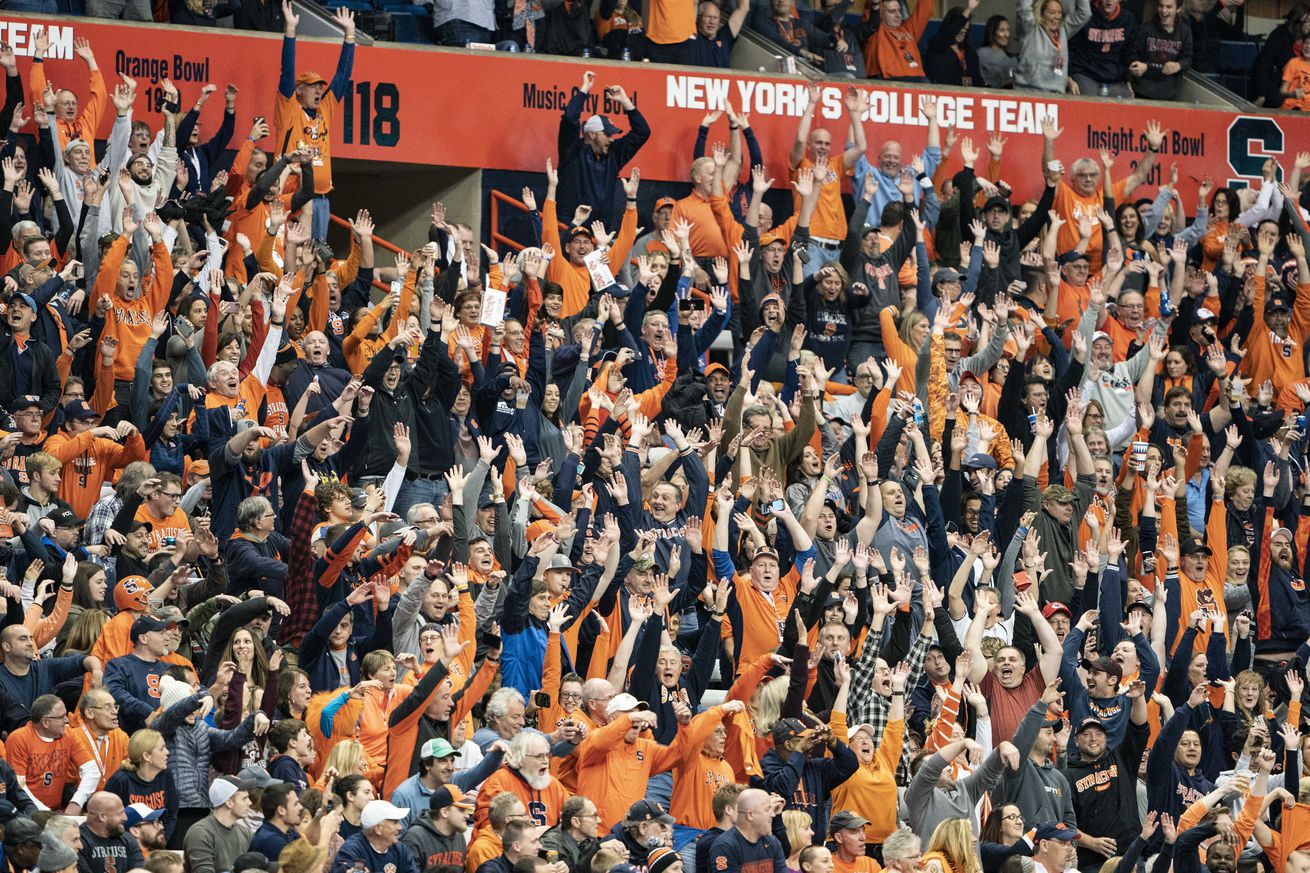 There’s nothing like attending a sporting event, let alone a football game, in the Carrier Dome. With the Syracuse Orange home opener just around the corner, this should have been an opportunity for many fans to get their first taste of sports inside the Carrier Dome. Unfortunately, fans won’t be allowed to attend games for the foreseeable future, and that’s a shame.

Lamar Jackson is good at football.

But let’s talk about the FORM on that hurdle #AirJackson #L1C4 pic.twitter.com/RuuufVAiPj

My first football game was memorable for two very good reasons, which is probably why my brain has morphed and thinks Football is a “good thing.” On September 1, 2011, the Orange clawed their way back from a 29-14 4th quarter deficit to defeat the Wake Forest Demon Deacons in overtime, allowing this young silly freshman to sneak into the front row of the student section during the mass 3rd quarter exodus.

While in the front row, I saw my academic advisor Julie Walas on the sidelines, and asked her how she had field access. She told me that she was the Otto coach, and in a moment of pure stupidity, I said I wanted to be Otto. A few weeks later I was on the team and that single moment completely redefined my entire Syracuse experience.

I am sure I went to one game in 1990 but nothing stands out so I’ll go with my first Dome football memory instead. My sophomore year I was living on Sadler 8 and on the Tuesday morning before the Syracuse-Florida game I noticed two RV’s with Florida Gators flags in the parking lot across the street. As the week went on more Florida fans arrived and I couldn’t believe how early they showed up.

On that Saturday I was in the concourse as Kirby Dar Dar was running the opening kickoff back and the entire building was shaking. I’ll never forget the day that Steve Spurrier decided he was done coming north of the Mason-Dixon line for a football game.

I’ve mentioned this game before. But if you’re looking for a reason why I’m the Syracuse fan I am, here it is. No. 14 Iowa came into the Dome against what was expected to be a lackluster Orange squad. Instead, behind their second-string QB, the Hawkeyes barely managed a 20-13 double OT win. That would be bad enough on its own, but Syracuse REALLY could’ve won this game if not for some elite goal line futility. Any SU fan over the age of 32 knows exactly what happened. Eight tries from the goal line with no success. I still hate Iowa.

When Christian proposed the topic I was excited. I was sure there was some moment that I would recall that I knew “that was the one.” I know I was there at least twice during the McNabb years. I have no idea which games. I know I was there for John’s aforementioned Iowa game, but I know I saw some of the Freeney era. It’s a weird conundrum. The first I recall details of is the day that Dwight Freeney set the single season sack record against West Virginia. I didn’t remember that detail until I read the recap, but damn do I remember him being an absolute beast out there. It was in the midst of the RJ Anderson experience and overall, I left the Dome a very happy high school senior that day. We never got to see early season games, since we were playing high school ball and North Country schools didn’t have lights back in those days.

I think Sean summed this game up best:

“What a dumb football game”

Yes, this is Syracuse football playing Villanova. Not the D1 basketball champion Wildcats, the FCS Wildcats. Easy win for Syracuse coming off back-to-back bowl wins, right? Well, Terrel Hunt gets ejected in the second quarter because he punches a guy on the ground. That means Austin Wilson comes in to play quarterback. Somehow, this game is tied at 17 with 12 seconds left in the 4th quarter and it’s VILLANOVA who has the chance to win with a 25-yard field goal that’s right in the middle of the hash marks. But Nova kicker Chris Gough missed wide right to send the game into overtime.

After both teams trade field goals, Syracuse fakes a field goal on fourth and one and the holder throws a touchdown in the second overtime. Villanova responds with a TD pass but decides to go for two. Nova QB John Robertson tries a run up the middle but is stopped behind the line by Robert Welsh as Cuse barely escapes opening day with a 27-26 victory in double OT over FCS VILLANOVA. And that was my first football game in the Carrier Dome.

Oh and the holder who threw that touchdown in double OT for Cuse? Some guy named Riley Dixon.

How about you guys? What was your first game in the Carrier Dome? Tell us in the comments below.