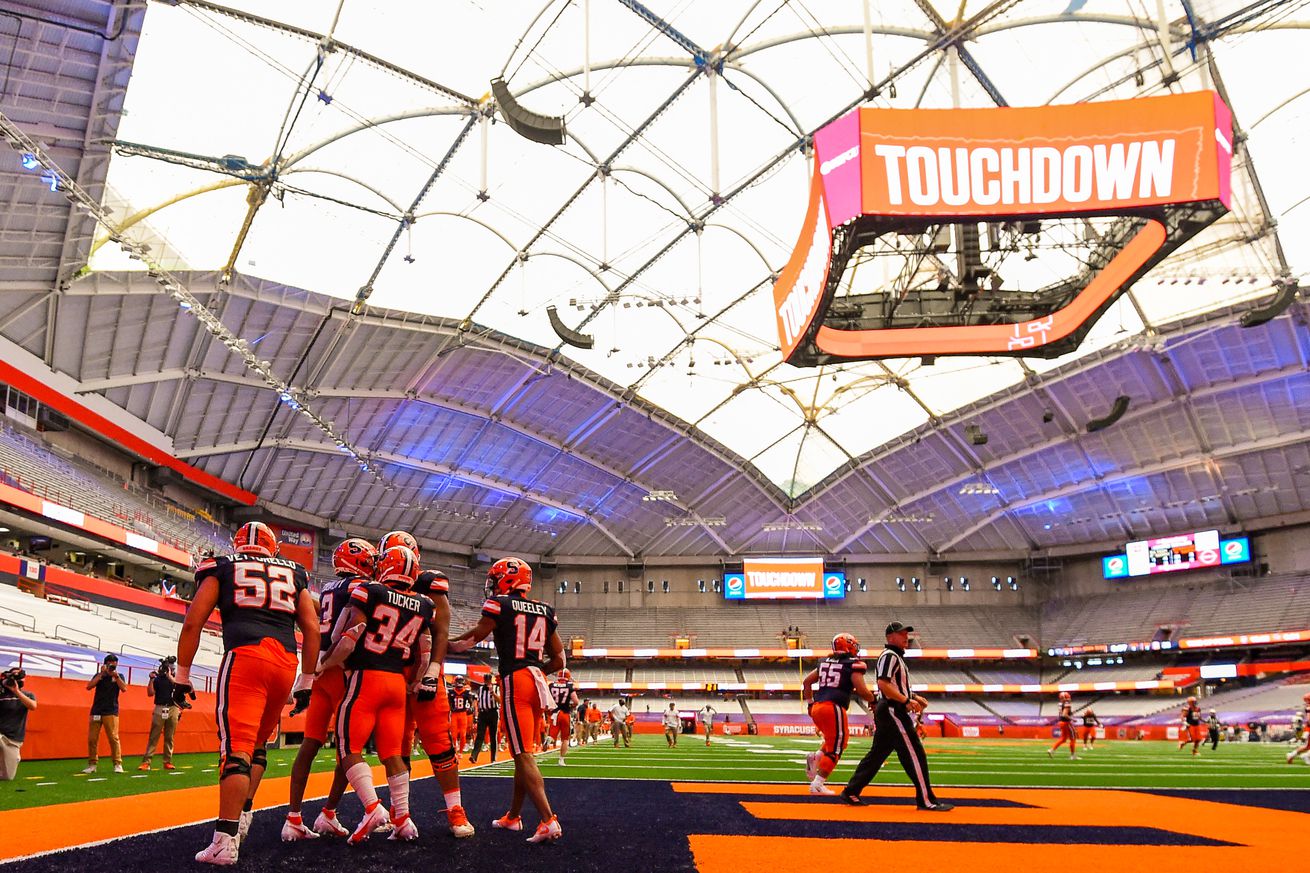 The Orange open the Stadium era with a big win.

The Syracuse Orange opened the new-roof-era of the “Stadium” in rousing fashion, beating the Georgia Tech Yellow Jackets, 37-20. This was the arrival party for Sean Tucker, running for 117 yards and a pair of scores on the day. Tommy DeVito also got back into a groove, throwing for 194 yards, two touchdowns and only one interception. The defense, while they gave up 449 total yards, made plays when they needed to, allowing the Orange to leave their home with a win.

Sean Tucker is an impressive new addition to this offense.

In the first quarter, it was apparent that Tucker’s presence in the offense added a good bit of power to the run game. As the game progressed, it was even more impressive. He showed some moves outside as well. His legs never stopped pumping, with some extra yards gained from that second effort. His burst for a 38-yard touchdown after a nice 18-yard Jawhar Jordan reception opened the scoring for the Orange. Tucker crossed the 100-yard rushing mark before the half, which hasn’t been seen for a while in Syracuse.

** For future trivia contests, remember that it was Sean Tucker who had the first touchdown in the “Artist formerly known as the Carrier Dome.”

This extra facet of the game definitely helped the offense open up the rest of the field. Without the extra pressure coming from third and longs, the passing game was able to move the ball, including a great 46-yard first half strike from Tommy DeVito to Taj Harris for a score.

After the half, Georgia Tech decided to dial up some pressure, which put a hitch in a few things that offensive coordinator Sterlin Gilbert tried to do, though the offense responded, mixing called runs and passes, including another great strike over the top for another touchdown to Nykeim Johnson and

The system produced 4 turnovers on the day, including interceptions by Josh Black, Trill Williams, Jahad Carter and newcomer Rob Hanna. Carter’s interception and return caused heart palpatations for every Syracuse fan, while lateraling the ball to Trill Williams, who returned it for a touchdown. I don’t know how or what happened on that play, but it was beautiful.

They Syracuse defense did a decent job against the Yellow Jackets in the air, but their run game produced a good bit more than the Orange hoped for. Whether it was Jamyhr Gibbs (109) or the other running backs, Dontae Smith (84) and Jamious Griffin (57), Georgia Tech found some space on the ground to gash the Orange for big runs. This may have some implications for the future, but could also have been a function of having to read a quarterback who isn’t afraid to take off, in Jeff Sims. One way or another runs toward the tackle were creating large chunks of yards, almost 300 yards on the day, which is something to look into.

While some of the runs continued to gain a good bit of yardage, as the fourth quarter rolled around, some adjustments and less arm tackling kept the Rambling Wreck slightly in check. As always it was another learning moment for the young defense.

The defensive backfield shows just how important depth on the roster is.

Without Andre Cisco, the defensive backfield was forced to shift around. There were sightings of Rob Hanna, Cam Jonas and Aman Greenwood, as well as more time for Neil Nunn at corner. In addition, Eric Coley is still out and Garrett Williams went down in the game with an injury. Jahad Carter, playing for Coley, had the aforementioned pick that turned into six. If nothing else, it shows the importance of depth, but also may have opened up the running game a little for Georgia Tech, without the presence of Cisco to react and attack the run.

Having capable backups in that position allowed the Orange to adapt and overcome some weird injuries both before and during the game. Similarly, a good number of players shuffled in for the linebacking corps. This can only lead to improved talent across the board and consistency moving forward.