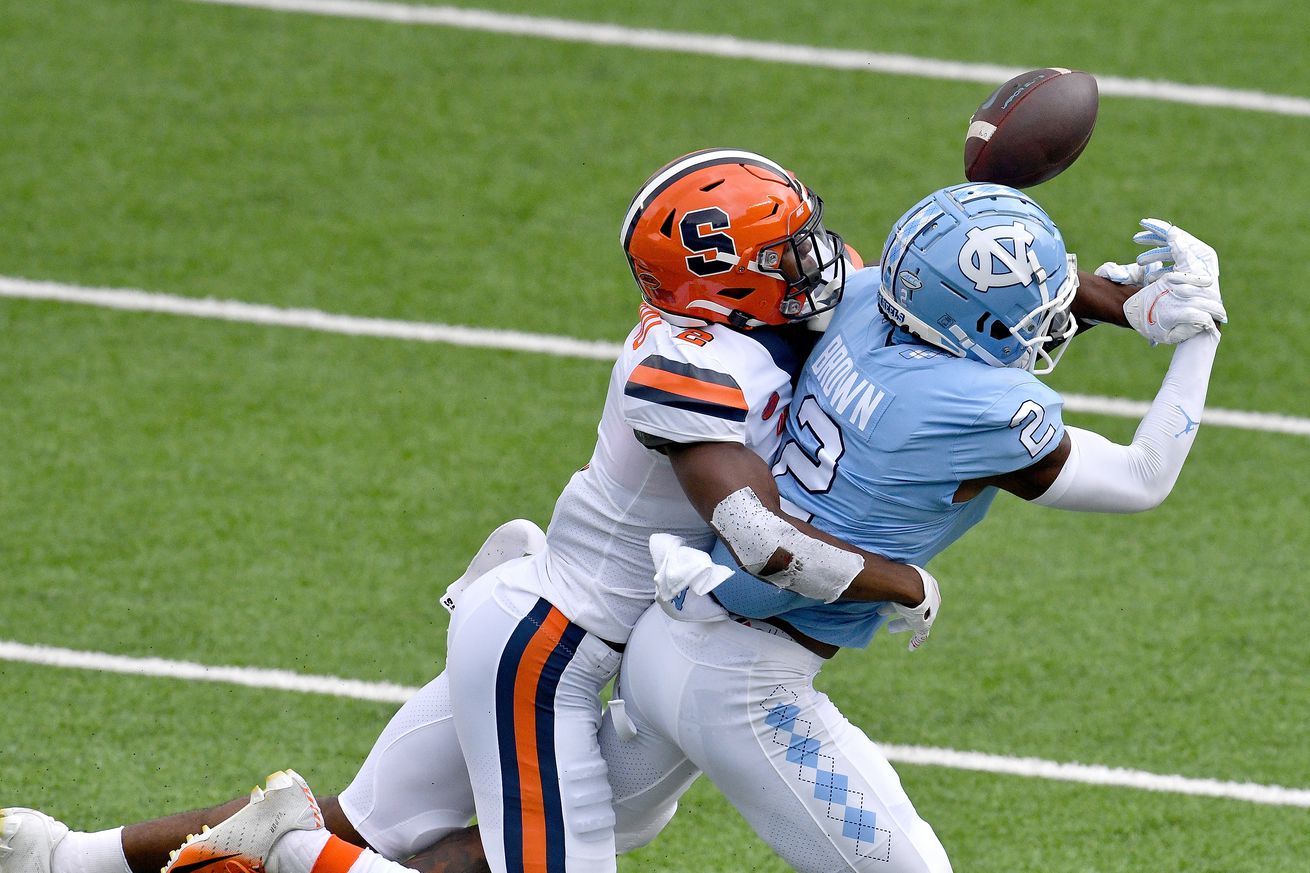 The season opener went as expected, but not as we hoped

The Syracuse Orange opener didn’t end how we hoped, but it may have ended about how we expected. The 31-6 loss was opened up in the fourth quarter, with the North Carolina Tar Heels scoring 21 in the fourth to finish it off. As it stands the Orange have a good bit to work on, but there were some things coming out of the game that leave some hope for the rest of the year moving forward.

Until they were worn down over the course of the game, Tony White’s new-look defense seems to have some life to it. There were a good number of different looks that were trotted out there. The linebackers rolled up to put pressure on Sam Howell; the defensive backs were shifty and versatile; Andre Cisco got his token interception on the day. It was a solid debut for the scheme that we’ve had a lot of hope for during this offseason.

Especially early, it was apparent that some assignments and coverage packages need work. That shored up, and individuals looked better than last year. Ifeatu Melifonwu and Garret Williams, as well as Neil Nunn all looked solid in coverage. As we knew, Melifonwu is going to be a number to watch moving forward. The young linebackers, Stefon Thompson and Steve Linton both looked the part and impressed on their debut. Overall they shut down a pretty good offense for most of the game, until getting worn down in the fourth. It’s hard to complain about a new defense that ticks those buttons.

Gilbert’s offense may be more of the same.

The first down run directly up the middle doesn’t seem to have left the Syracuse offense. Even with a back that needs some space in Jawhar Jordan, the Orange kept trying to pound the ball up the middle to little effect. The few times the backs got into space, Jordan and McKenzie Pierre both looked solid, but there were too few times it happened. The Orange finished the first quarter with 18 yards and then 35 for the half

Even in the loss, Tommy DeVito looked more the part than he did during his relatively injury prone 2019 season. That said, he finished the day 13-31, with 112 yards total passing and 30 yards rushing. He was our leading rusher on the day, which is mildly frightening, and also indicative of the way the offense was running. Not a lot in the air, not a lot on the ground, especially from the running backs.

The questionable line, starting a fullback at guard didn’t help the cause at all, though I’ll be doing a full breakdown to see where the issues there actually lie. It didn’t look good for the Orange offense, but there were some things we can hope improve moving forward.

Syracuse may have gotten in their own way on the day.

To start the game, there were 17 points left on the table in the first half. Nykeim Johnson’s impressive return for a touchdown was brought back on a Drew Tuazama crack block that wasn’t necessary. Andre Szmyt missed a chip shot in most un-Szmyt like fashion and Sharod Johnson missed an open touchdown in the right corner of the endzone. The inability of the Orange to convert on those points definitely hurt them.

The offense also having issues to start the season contributed to the defense staying on the field and giving up a good number of points late in the game. It was 10-6 going into the third quarter, which was all on the defense at that point. In the grand scheme of things, the Orange have a good bit to work on, and at the same time have some pieces that have impressed in the opener compared to what we were expecting from them.