Max Meisel remembers walking into Greg Robinson’s office in spring 2005, hoping to walk onto Syracuse’s football team. The 5-foot-4, 145-pound freshman was unlikely to see the field, but he asked Robinson for a shot. The head coach studied him for a moment before agreeing, and Meisel eventually became a starting punt returner, graduating from SU with two letters.

“He taught me life’s first biggest lesson: that you got to go after what you want in life, and you need to do it with as much passion as you possibly can,” Meisel said. “I’m 35 now and I feel like I can do anything because of the gifts that coach Robinson helped give me.”

Five years ago, Meisel said Robinson called him the smallest — and the toughest — player he ever coached.

It was the kindness, generosity and overall passion for football that former Syracuse players and assistant coaches remember him for, several said.

Robinson died Jan. 5 from a form of Alzheimer’s disease. He was 70 years old.

The southern California native coached, both collegiately and in the NFL, for parts of five decades. Robinson’s career included defensive coordinator stints for the New York Jets, Kansas City Chiefs and Denver Broncos — with which he won Super Bowl titles in 1997 and 1998 — and at the University of Texas in 2004, all eventually leading to his first head coaching job at Syracuse.

Robinson led the Orange from 2005-08, compiling a 10-37 record over four losing seasons, with five wins later vacated due to NCAA violations. But he recruited several future NFL players, which helped his successor, Doug Marrone, take SU to two bowl games. While at Syracuse, Robinson ingrained himself within the local community and created a family-like atmosphere within the program, several people said.

“His time (in Syracuse) was tough,” said Robinson’s son, Dominic. “But I don’t think he ever once regretted coming here and is always really grateful for everything that this place gave him.”

Robinson grew up the middle of eight children, and was sometimes “lost in the shuffle,” Dominic said. He got in trouble growing up, developing a “rebellious spirit,” according to his Los Angeles Times obituary. 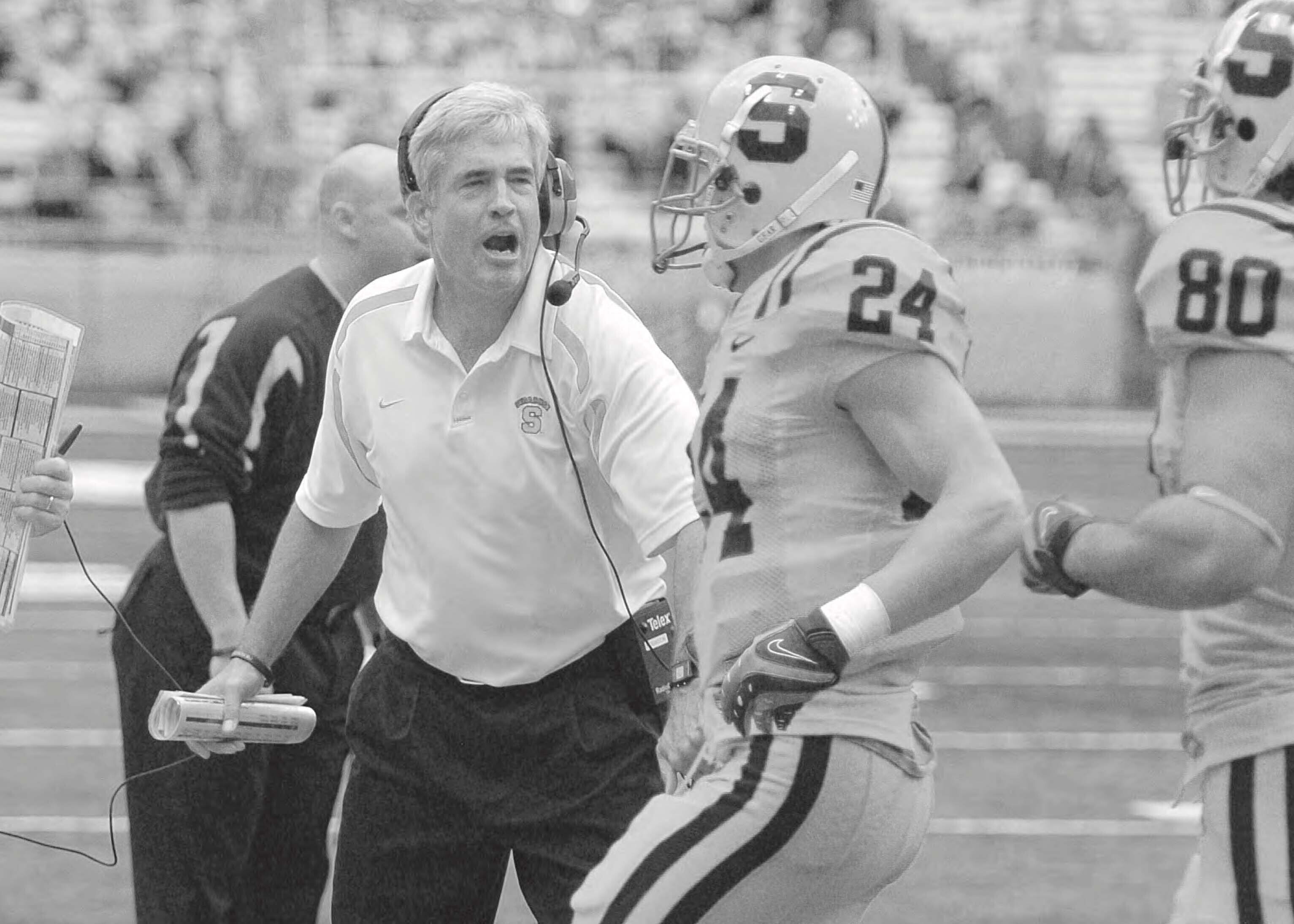 But playing football gave Robinson purpose, Dominic said, and eventually led him into coaching. Robinson became an assistant at University of the Pacific after playing there from 1972-74. By 1990, he’d progressed to the NFL as the Jets’ defensive line coach, where Robinson quickly developed a reputation for his ability to lead defenses. In the 1998-99 playoffs, Robinson’s Broncos defense allowed just two touchdowns in three games, leading to a Super Bowl title.

After winning the Rose Bowl with Texas in 2004, Syracuse athletic director Daryl Gross hired Robinson to replace Paul Pasqualoni in 2005. Former SU assistant Chris White remembered Robinson spending time with holdovers from Pasqualoni’s staff, sharing his plan for the future of the program. The energy and vision Robinson brought from his time in the NFL was “refreshing,” White said.

“You could just tell he was really excited about being the head coach at Syracuse,” White said.

Robinson installed a new West Coast offense, as well as new defensive schemes. The coach was heavily involved with the defense — what former linebacker Derrell Smith described as “his baby.” In his first two seasons, Robinson dualed as both the head coach and defensive coordinator.

Fellow linebacker Jake Flaherty recalled how Robinson focused on details and teaching technique, and how he was especially adamant about linebackers being able to cover the width of the field when moving laterally. Flaherty said he can still remember all three of SU’s base defenses and each player’s assignment because of how Robinson coached. 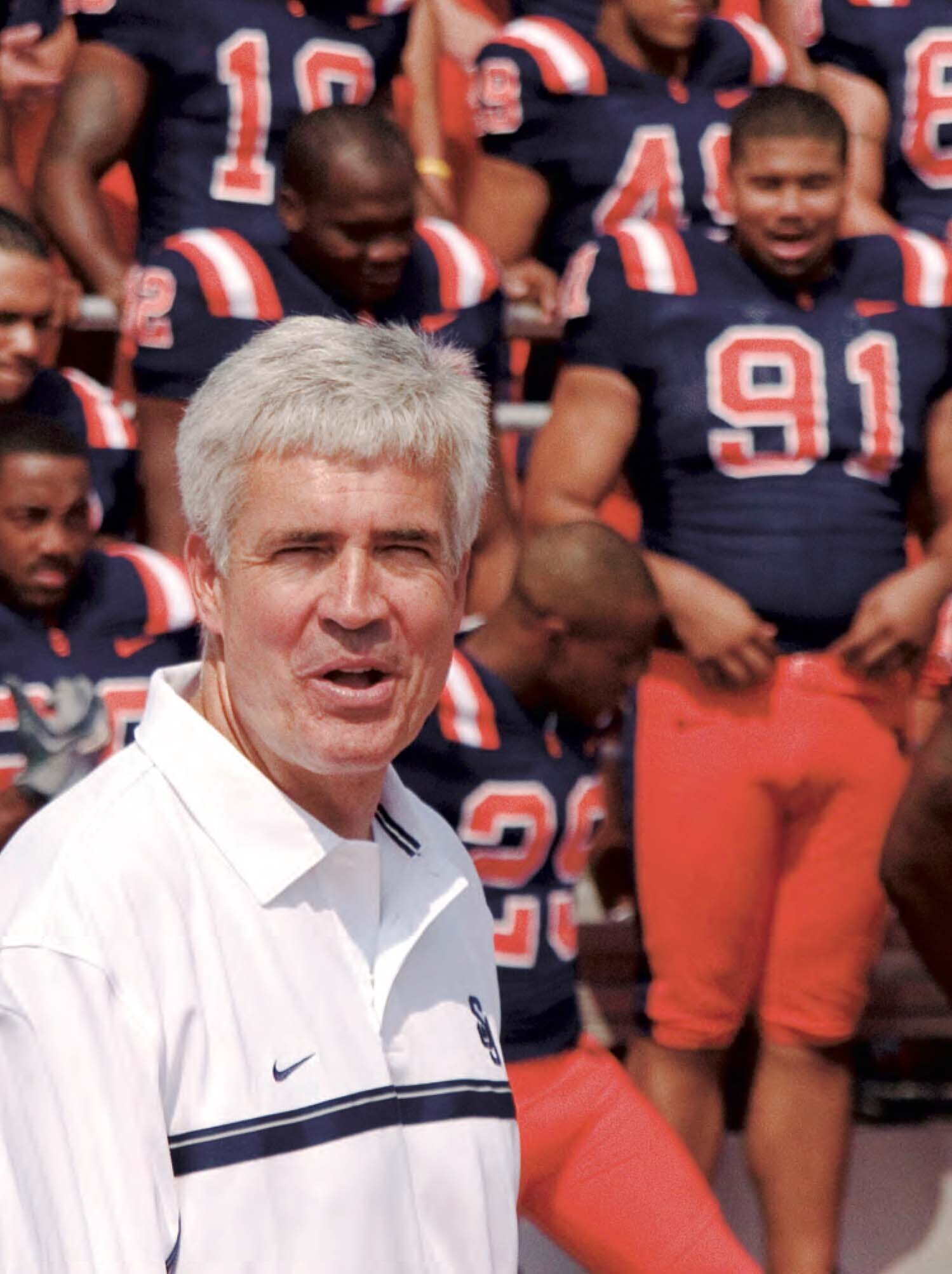 Several former players said Robinson left a sizable impact on them even after they graduated from SU. Daily Orange File Photo

Flaherty was just one of the many former players that Robinson impacted. Several of them sent the Robinson family their well wishes as his health worsened in recent months in a video tribute that Meisel organized around Christmas. Dominic said he has received countless texts and emails from people who were touched by Robinson’s kindness.

“To see one after another — some of our star players, guys that went on to be very good NFL players, to some of our walk-ons — to hear them all deliver the same message … was obviously really special,” Dominic said. “You can’t always get the outcomes you want on the field, but (Robinson) was damn sure committed to creating the environment that he wanted to create in the locker room. And clearly he was successful with that.”

Robinson emphasized the importance of family during his time as head coach, former players said. His wife Laura always brought players cookies on Fridays, former punter Rob Long said, and Meisel said that Laura was a “mother figure” for every player on the team. Every Sunday during the season was “family day,” Smith said, where coaches brought their families for dinner at Manley Field House. When Long arrived at Syracuse in 2007, Robinson invited all the freshmen to his house for dinner.

During Robinson’s time in Syracuse, he and Laura were also involved with several community organizations, including St. Lucy’s Church, where Laura worked in the soup kitchen. Robinson spent time at the Elmcrest Children’s Center, and Flaherty recalled going to local hospitals, churches and senior care facilities with his head coach. Robinson also enjoyed going to Kitty Hoynes in downtown Syracuse, and he competed in the city’s 10-mile Mountain Goat Run with his friends, Dominic said.

You could just tell he was really excited about being the head coach at Syracuse.

“Community service — giving back to the community — was a big part of his coaching philosophy,” White said.

With Syracuse sitting at 2-8 with two games left in the 2008 season, Robinson was told he wouldn’t be returning the following season. The next week, the Orange were three-touchdown underdogs at Notre Dame.

But SU scored the game-winning touchdown in the final minute, giving Robinson his last, and biggest, win as a head coach. The game meant more to Robinson, who grew up in an Irish Catholic family and was a lifelong Notre Dame fan, Dominic said.

“If you had to go out, that was a pretty special way to do it,” Dominic said.

In a practice that week, Flaherty remembered the then-57-year-old Robinson jokingly tackling one of Syracuse’s running backs. The energy and passion Robinson brought to practice every week despite leading one of the Big East’s worst teams still stands out to his former players today. 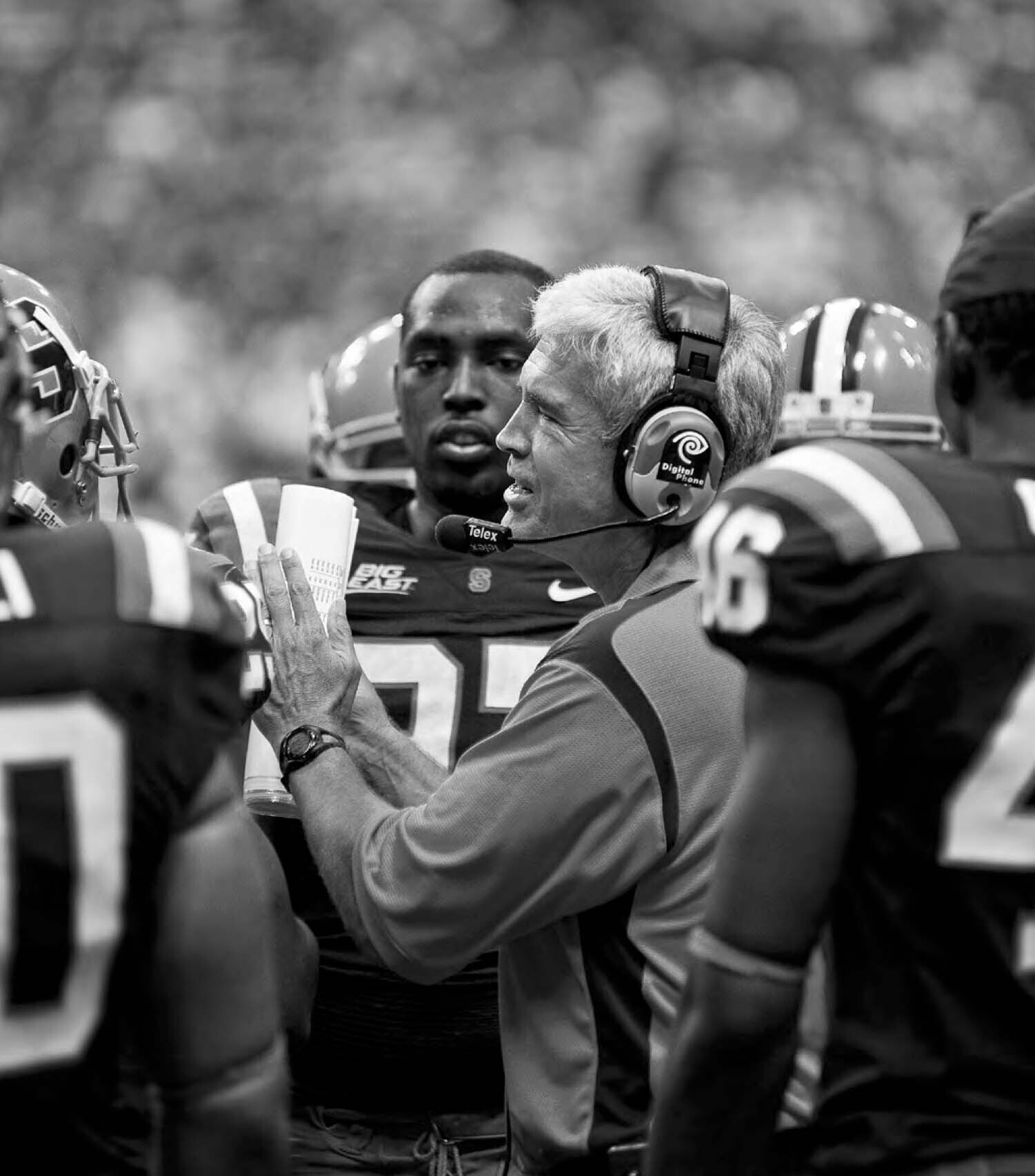 “No matter what, he believed it,” Smith said. “We had a lot of losing seasons, but for him, it was just like, ‘Next week, we’re going to go out there and win.’”

Meisel remembered how Robinson handled losing graciously and never went after the media. Instead, the coach stood at the podium week after week with respect and humility, Meisel said.

At his final Syracuse press conference, Robinson compared his constant positivity to that depicted in the children’s book “The Little Engine That Could,” saying “I still think I can.”

Former players and coaches said Robinson shouldn’t be remembered solely for his four-year tenure at SU but instead should be celebrated for his lifelong work as a football coach and family man.

“He’s achieved the pinnacle of success in his profession,” Meisel said. “And he raised a really great family. Although 70 years old is way too young to die, you take a look at that and you say, ‘You know what, that’s a great life and I hope that I can achieve that kind of success, while at the same time impacting other people’s lives in the way that he did.’

“And that’s a life lived well, when you really look at it like that.”

The post Those close to Greg Robinson recall his generosity, passion for football appeared first on The Daily Orange.