Two hours before Syracuse faced off against No. 6 Virginia in the second-to-last game of Lucas Quinn’s career, seven of his aunts and 21 cousins tailgated in a parking lot just west of the Carrier Dome.

Over burgers, hot dogs and beers, family and friends chatted about SU lacrosse’s upcoming bout with the Cavaliers, about Quinn’s unfortunate injuries and about what could’ve been for the fifth-year midfielder in his final season. But mainly, those who made the two-hour drive from their hometown in Niskayuna, New York, and the handful of others that came from as far as Atlanta, Georgia, were there because of how proud they are of the person that Quinn’s become.

Each donned a white t-shirt with his name and No. 26 on the back. A smaller group will be back for the season-finale on Sunday, but the family wanted one last celebration.

“He’s doing everything in his power to finish strong,” said John Quinn III, his eldest brother.

The 2022 season has been a “frustrating” one for Quinn though, he said. The five-star recruit worked his way up from a reserve midfielder role in 2018 to a coveted starting role this season. After overcoming a right calf strain sustained during preseason, he notched a hat trick in his first career start against No. 1 Maryland. But a month later against Johns Hopkins, he was sidelined again with a broken thumb on his dominant hand.

Quinn returned with three games left in the year, but his role has significantly diminished as his hand continues to heal. He knows playing professional lacrosse isn’t the most realistic goal. He knows that next week, after playing his last game, will be the beginning of a difficult shift since “lacrosse player” has defined so much of his life. But those close to him, including his two older brothers who underwent the same shift, know he’s more than ready to handle it.

“It’s going to be such a transition. And this is all going to come to an end,” Quinn said before the Virginia game.

For Quinn, the youngest of three brothers, playing lacrosse was always logical. He started around 5 years old and ran around “trying to keep up” with John (seven years older), Evan Quinn (three and a half years older) and their friends.

Quinn always had a stick in his hand growing up, said his high school teammates and neighbors Dylan Pantalone, Jon Pfohl and James Sexton. The trio knew in third grade that Quinn was good enough to eventually become a five-star recruit. He became the record-holder for most points in Niskayuna High School history (342 points), said his dad, John Quinn Jr.

In his first collegiate game, Quinn scored twice against Binghamton. He broke his pinky during his sophomore season and tore his groin, too — injuries that led to limited minutes in 2019. The past three years, Quinn filled a consistent role on the second-line midfield, backing up the first-line that featured All-Americans Tucker Dordevic, Brendan Curry and Jamie Trimboli.

This season, head coach Gary Gait never had a conversation with Quinn saying that he’d be the new starter, John said, but it seemed natural. He’d worked hard enough to earn minutes during his first four seasons at SU, and was finally prepared to fill that starting role.

“That was his goal. He wanted to be the guy,” John said.

Quinn returned from his calf injury and electrified Syracuse with a second-quarter hat trick against No. 1 Maryland, a sequence where he proved what he was capable of, John said. Ellen Quinn, his mother, said she didn’t even think Quinn would play that day because he wasn’t fully conditioned. But his family wasn’t surprised by his performance — they always knew he was that good.

Then he broke his thumb. Syracuse slumped way below .500, and the end of Quinn’s career loomed.

“It’s hard enough when you graduate from college and you leave your team, but when you’re leaving it the way this season ends up, and an injury,” Ellen said, “it’s a bust.” 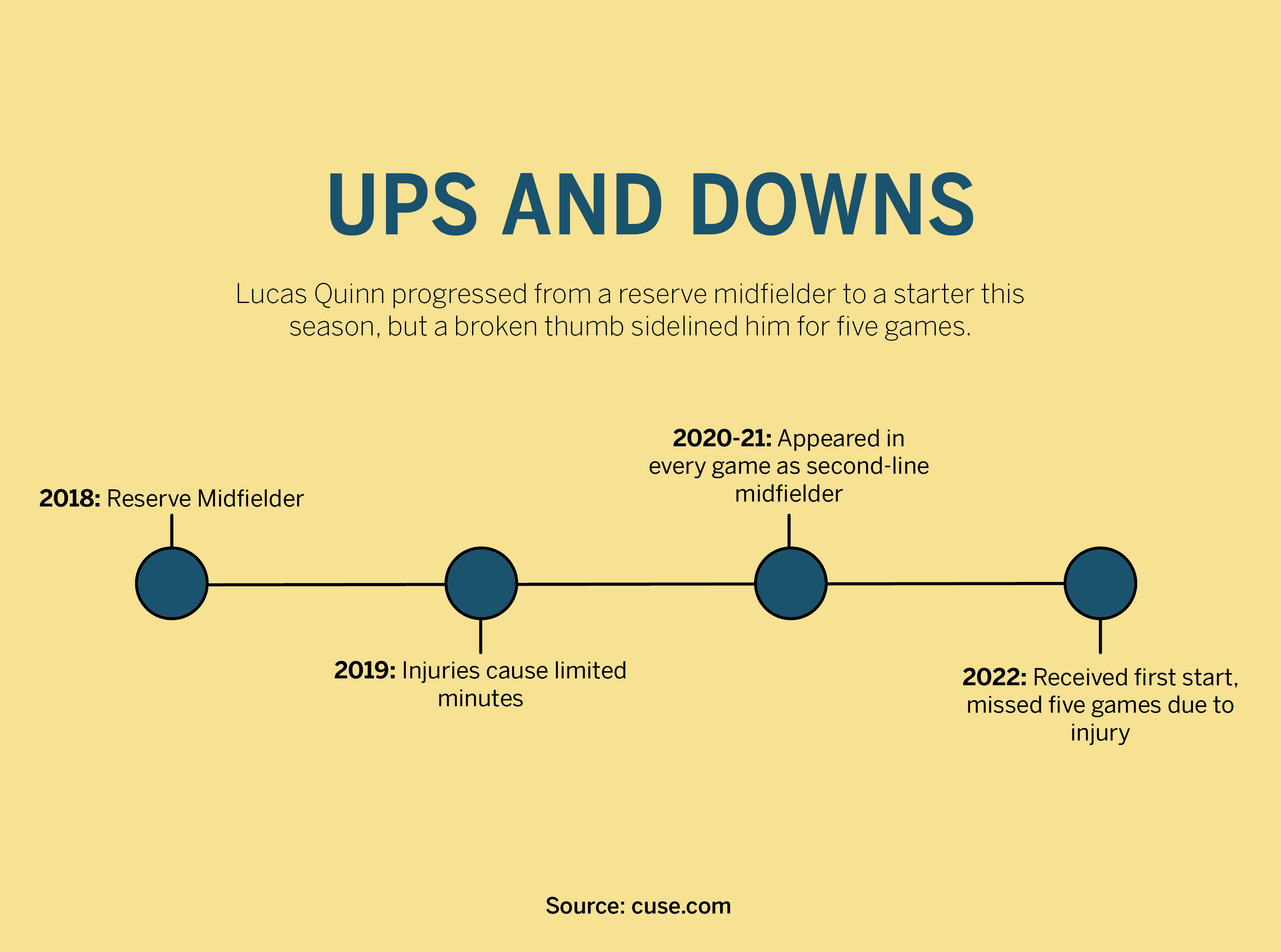 Still, Quinn’s glass-half-full mentality means he’s persevered through a difficult season, his family said. He’s part of what Gait has repeatedly referred to as the “foundation” for the future because of how closely he works with young midfielders like Jackson Birtwistle, Matteo Corsi and Tyler Cordes. From the sidelines during his injury, Quinn continued to coach and support his teammates, Gait said.

“It’s easy to get down on yourself, but that’s not the type of guy Lucas is,” Evan said.

Quinn knows the all-but-likely abrupt ending to his career is coming after the Notre Dame game. He’s trying to “soak in” the moments that are left with his teammates and best friends, John said.

It’s a conversation that both brothers — who played at the University of Hartford but didn’t go pro — have had with Quinn. John said it was a “shock” to figure out a new routine that’s different from lacrosse. Like any transition, it’s about refocusing motivation and energy toward something new, his brothers said.

“Your identity growing up is ‘I’m a lacrosse player, that’s who I am.’ But when that ends and you’re no longer suiting up for Syracuse lacrosse, it definitely takes a little while to figure out your new situation and your new groove and your new identity,” John said.

Both know Quinn will be able to make that transition well, though. Quinn said he’ll still help at Niskayuna’s high school and club programs. Kids from Niskayuna consider the Quinn brothers “legendary” in the lacrosse world, Ellen said.

He’ll still play casual lacrosse this summer too and work with Ryan Powell’s Rhino Lacrosse. Beyond that, he plans to ski and golf during his free time and work in commercial real estate in Albany, New York.

Lucas Quinn’s family wore jerseys with his name and number on them at one his final games in a Syracuse uniform. Roshan Fernandez | Senior Staff Writer

“In hindsight, there’s so much more to life (than lacrosse), obviously,” Quinn said.

From the parking lot outside the Dome, Quinn’s parents talk about how he always plays well against Virginia. He had two goals in Syracuse’s first upset of UVA last year, and then two goals and an assist in the second upset. The Cavaliers went on to win the national championship.

This year, he had another two goals and an assist in February. They knew he’d be on the field — against Virginia — in a few hours. This time, Quinn was held without a point or a shot in limited minutes because his hand is still healing. And in a week, he’ll likely be done for good.

“It’s a huge transition, but it’s all good. It’s what life is,” Ellen said. “You’re always moving on as you get older, that’s just what he’s doing.”

The post ‘This is all going to come to an end’: 5th-year Lucas Quinn reflects on SU career appeared first on The Daily Orange.